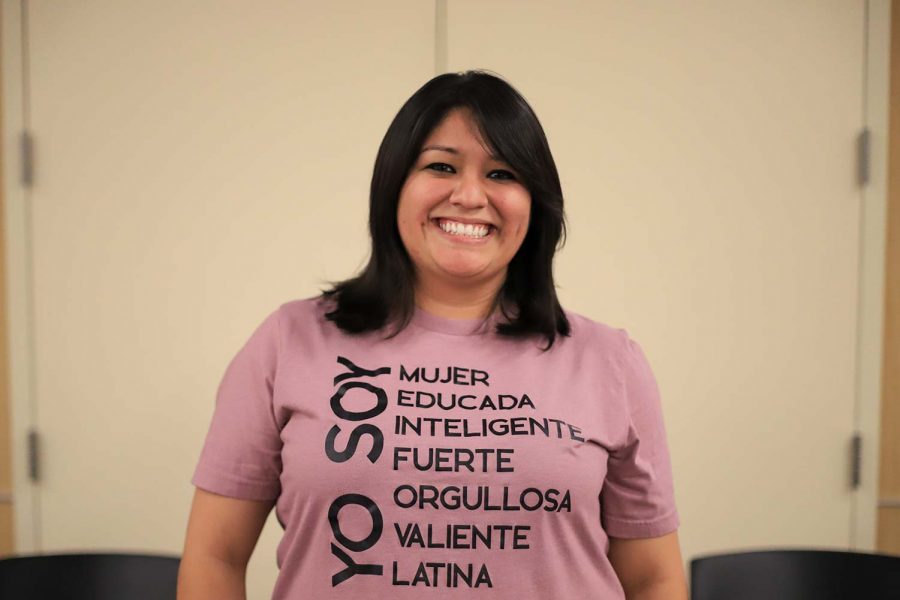 Assistant director of MOSAIC Ruby Garrett says she wants to make sure Hispanics and Latinx students see MSU as their home away from home and that MOSAIC provides that cultural environment for them, Sept 22.

Assistant Director of MOSAIC Ruby Garrett has always been involved in her culture in one form or another. “[What] Hispanic Heritage Month means to me, especially since I’m Mexican/Hispanic…is the going back to the roots of my culture,” Garrett said.

She says that being Latina at MSU has allowed her to be there for Hispanic or Latinx students when in need of questions and or help throughout their college journey.

“It’s always good when you are able to sit down and talk to someone who looks like you and can just talk about anything. Especially if you want to talk about things and experiences of when you were younger…it’s one of those things that we can both relate to, especially if we are from the same country for example like if we are both Mexican. We are both able to say ‘hey I’m from there’ and then the connection and relationship is just easily there. I’ve always been involved in my culture in some shape or form,” Garrett said. “I did baile Folklorico: the dances with the dresses… to really be in my culture and learn more about my culture. Then I eventually got involved in a nonprofit called Zavala Hispanic Cultural Initiative for another way to empower Hispanics and provide opportunities and education throughout the community for them.”

Garrett said the ability to have relationships with Hispanic or Latinx students means a lot to her because most are first-generation. She believes her experience as a first generation Latina allows the students to feel that they have someone whom they can relate to.

“I’m able to guide them through college here at MSU. I was first generation too and I know it’s really hard for Hispanic and Latinx students to go off to college sometimes because we are so family-oriented. [Whether] they are the oldest one and are helping their family along the way or the youngest and it’s hard for them to let go of their family, [it’s difficult], but I’m able to relate to it and so I have that connection with a lot of the students here. A lot of our… Hispanic/Latinx students want to see their culture represented,” Garrett said.

Garrett says she wants to make sure Hispanics and Latinx students see MSU as their home away from home and that MOSAIC provides that cultural environment for them. Now a part of MOSAIC, Garrett is able to do more than when she was an undergrad in UPB.

“[During] my time at Midwestern State as an undergraduate, I do remember I was involved in UPB, the university programming board. They did a couple of things for Hispanic Heritage Month, and I was also social awareness chair.  So, I wanted to get the Hispanic culture here at MSU and Mario Ramirez who was the activities coordinator at the time. He would help me a lot when wanting to do things for our culture, but I think now that there is a cultural center for all different communities and it’s not just celebrated throughout September and October in that… but really celebrated throughout the whole year, I think it really benefits the students.”

The Mosaic Cross-Cultural Center did not exist while Garrett was doing her undergraduate studies. She believes that if the center would’ve been there while she was a student, she would’ve been able to be closer to her culture.

“I think if I had seen all the activities and events as a student, it really would’ve helped me be closer to my culture and find the people that I wanted to find in my community. Because it’s not just celebrated in a month, it’s celebrated year-round,” Garrett said.

Each year, a specific theme for Hispanic Heritage Month is determined nationally by the National Council of Hispanic Employment. This year’s theme is Esperanza.

“I follow the national Hispanic Heritage Month theme… This year it’s Esperanza: celebration of Hispanic heritage and hope. Hopefully, we’ll get our t-shirts in soon. The designs will have an image of Esperanza and that symbol of hope on them. Regardless of the theme, each event is related to education and entertainment. Even though it’s fun, we still want to make sure people learn something. Not only are you having fun, whether it be at a Salsa class or learning how to make a traditional dish, people are also learning about our heritage and culture,” Garrett said.

Last year was Garrett’s first year as assistant director of the Mosaic Cross-Cultural Center. Due to COVID-19, however, she was not able to plan a lot of activities and events because of restrictions.

“I’m proud of what we were able to accomplish last year. I will say for Hispanic/Latinx, any of the events where we are able to see a lot of Hispanic/Latinx students at [like] Viva MSU was amazing. I know that was just last week, but we were able to actually do it,” Garrett said. “Seeing so many students there and ones that I haven’t really ever seen or don’t get to see as often. Making sure they know they have a community here and organizations catered to them where they can be involved in and volunteer at, that they have that here.”

What makes Garrett most proud to be Hispanic/Latina is the culture she belongs to. She enjoys every aspect of being Latina: the food, the music, the dancing, the colorful history and the flavorful love that Hispanics carry in their blood. Garrett believes she embraces her culture to the fullest and the culture embraces her back.