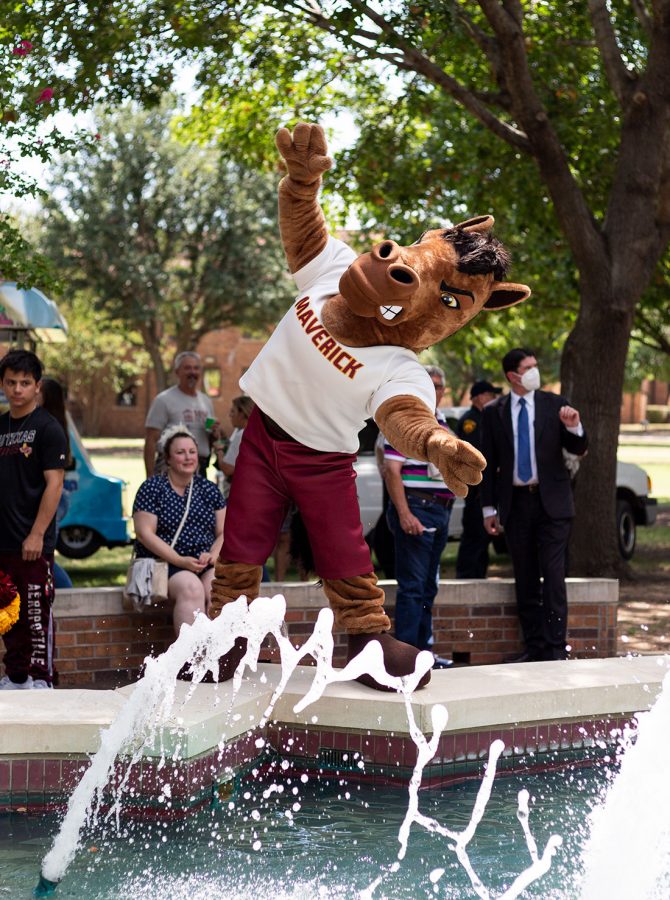 Maverick considers a jump into Bolin Fountain, but decides to pose instead. Sep 1.

“It will be really positive for students. Day to day, students and individuals won’t notice a
change. We’re still Midwestern State University,” Keith Lamb, vice president of student
affairs, said. “We still have our own identity, our own mascot, nothing changes in that regard. But what it does is it gives us a system behind us that gives us institutions helping us with common problems.”

Lamb said joining the Texas Tech system will help give MSU more recognition to help the university’s brand as well as giving them a bigger voice in the state legislature. Other students across different majors expressed excitement at joining the system.

“We’re brought into a new system where Texas Tech is such a big school that we’ll have more people recognizing us, more competition as well. A lot of eyes are going to see us now… I think it will give more opportunities for students,” Giselle Garcia, exercise physiology sophomore, said.

“Having more students move in from Texas Tech could bring more interest to the town, and I think it will give MSU more publicity nationwide because Tech is so well-known,” Wilson said.

James Johnston, on his first day as interim president after Suzanne Shipley’s retirement, attended the celebration. Johnston was seen in his signature cowboy boots speaking to other faculty members.

“It’s just as Chancellor Mitchell said. It’s strength in numbers, we’re better together. There’s so much synergy and opportunity between the sister institutions. I’ve already talked with the other presidents and the ideas of their programs and offerings and how we can partner on some things…. The higher education landscape gets harder to reach every year because more and more we’re competing for a smaller group of college-going students,” Johnston said. “We’re in a good position, a strong position where we’re stable financially and in enrollment. When you’re going to time something like that, you’re going to want to do it when you’re strong, the system is strong, and you add value to each other.”

Johnston said the name recognition will add to a strong identity as well as build support from the state legislature. He said MSU may expect an increased enrollment because of the association with Texas Tech University.

“It’s not immediate. As that co-branding and that information circulates out, I think we’ll see increasing interest in enrollment in our programs and opportunity to direct students within the system,” Johnston said.

“It will bring in students from Texas Tech who are maybe not ready for the big school in Tech who want to start off smaller,” Porter said.

The snow cone celebration took place after a three-hour meeting of the Texas Tech University Board of Regents in Clark Student Center. The Board of Regents meeting honored Midwestern State’s previous Board of Regents, ratified Johnston as interim president, approved amendments to the regent’s rules and the mission statement and a historical overview of Midwestern State University. With the transition into the TTU System, many faculty members find themselves in interim positions, such as former Fain College of Fine Arts Dean Martin Camacho, who now serves as interim provost. At the celebration, he expressed excitement over joining the system.

“Faculty, staff, and students have demonstrated throughout the day that they’re really excited about joining the system and the new opportunities that they have,” Camacho said.