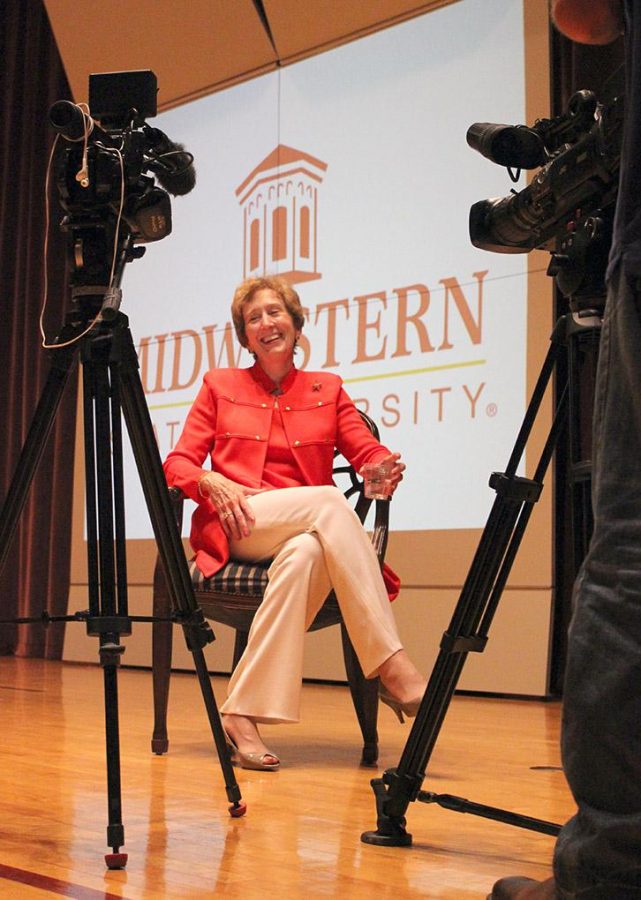 President Suzanne Shipley discusses with media reporters after the press conference about thier favorite local places to go out to eat. Photo by Rachel Johnson

Suzanne Shipley, MSU Texas president, announced via postmaster Wednesday, June 2 that her intended retirement date is August 31, 2021, after holding the position since August of 2015. She informed the Board of Regents of her intentions at the most recent May board meeting.

In the same postmaster, Shipley announced that the Texas Senate voted to approve the bill that would make MSU part of the Texas Tech University System, and now the bill awaits Governor Abbott’s approval in the coming weeks. If the governor approves the bill, MSU will officially be a part of the Tech System in September. Shipley listed the move to Tech and the upcoming launch of the Centennial in January 2022 as two signs indicating the beginning of a new chapter for MSU, a chapter that she feels would be an excellent opportunity for new leadership.

The MSU Board of Regents has expressed its intent to ask James Johnston, provost and vice president of student affairs, to be interim president starting September 1. Shipley announced that more details about the search for a new president will be released later in the summer and that the search will be an extensive collaborative effort by MSU and Texas Tech.

Shipley also used the Postmaster to celebrate some of MSU’s accomplishments during her tenure as president. Among them, she listed the launch of the Boundless Opportunities campaign, the creation of the university’s first doctoral program, the approval of the Diversity, Equity, and Inclusion Strategic Plan and the successful building and renovation projects of the Centennial Hall, Daniel Building, Moffett Library, Bridwell Hall and Legacy hall. She also praised MSU’s response to COVID-19, saying she believed MSU might’ve been the safest place in the state during the height of the pandemic.

Included in her retirement announcement was this emotional message:

“I hope you all know how very grateful I am for this opportunity to lead such an energetic, can-do group of people. I enjoyed every single day, some more than others, but all were important. It has been a privilege to turn my experience in higher education to the challenges and opportunities here at MSU Texas (just that version of our name is progress). Both my husband Randy and I hope that our legacy will be one that is cherished as we cherish MSU. It is here that I was able to accompany my mother through her last five years on earth, here that I stood with the family of Robert Grays to honor his important influence on our university, and here with our campus I mourned the loss of Coach Noel Johnson. Difficult times, but some of the most important that life brings us.”