The Wichitan’s top stories of the year 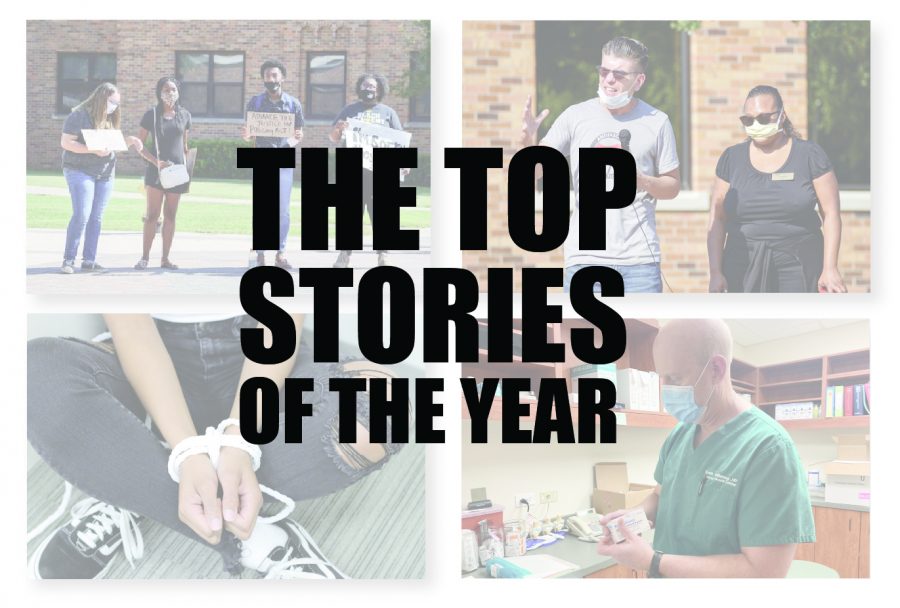 The Wichitan's top stories of the year.

With the 2020-2021 academic year officially in the books, let’s take a look back at some of the biggest news stories covered by The Wichitan over the year.

MSU Texas professor of philosophy Dr. Nathan Jun, who made national headlines with a controversial Facebook comment, clashed with the Black Student Union Sept. 29. After speaking at Amnesty International’s rally for Breonna Taylor, Jun took to facebook to voice his displeasure with the BSU, saying they should be ashamed of themself. The BSU responded by taking offense to Jun’s comments and the implication that they were antisemitic.

“We want it to be clear that we do not condone or promote hate speech and/or hate crimes. We believe that comments and acts such as these create a hostile learning environment – one that we as Black students are all too familiar with,” the statement from BSU said. “We recognize and accept those who have different beliefs and would not shun anyone for holding their entitled beliefs, but we will not allow people to slander our organization’s name when we as Black students have spoken the most about inequities and unfair treatment of Black people, People of Color and marginalized groups at our university.”

Throughout the year, Mustangs came together to protest the deaths of George Floyd, Breonna Taylor and others who sensibly lost their lives to injustice. In October alone, the Black Student Union started the 21-day Racial Equity Challenge, MOSAIC Peer Educators hosted the March for Peace and Amnesty International hosted the Justice for Breonna Taylor Rally. Students, faculty and staff from different walks of life found a wide variety of ways to speak out against hate, whether it be through poems, speeches or marching with signs.

“It doesn’t matter if you’re Black, you’re white, you’re Asian… whatever race you are, it’s caring about humanity, and it’s caring about the person right next to you. It’s caring about everyone in this little area. That’s what it is, and that’s what we’re fighting for, so today you’re choosing to fight. You’re choosing to march for innocent Black lives lost. Tonight you’re going to educate yourself. Tomorrow and the next day after that, we ask that you continue to fight the good fight of a life that’s anti-racist,” Keza Muvunyi, mass communication junior, said.

MSU officials announced through a Postmaster on Oct. 21 that there would be no spring break in 2021. Officials say the decision was made to lessen the likelihood of students going off campus and contracting COVID-19 during the break. The decision sparked mixed to negative reactions from both students and faculty, many of whom felt left in the dark by the university.

“That’s very unfortunate,” Ginelle Fontinelle, exercise physiology senior, said. “With COVID and stuff, it’s not that much that we could really do with spring break, but some of us actually look forward to spring break as a break from school and from classes and everything. It’s just like a way to relax and take a relaxing thing from the past semester, especially with everything going on and stuff, so it’s kind of rough.”

MSU has continued to make strides toward becoming the fifth member of the Texas Tech University System since signing a memorandum of understanding in early August. As of Spring 2021, University president Suzanne Shipley has stated that the odds are at 99% that the university request to join the system is approved. The Wichitan was also able to speak with Christopher Huckabee, TTU Board of Regents Chairman, to learn about what Texas Tech gets out of MSU joining its system.

“The driving factor really was a student pipeline. It creates opportunity for students who are at MSU to come to Texas Tech for things like law and medicine, and those are the things to us that are really more important. We are very focused on having a diverse student population. Creating the pipeline for grad school, med school, law school [and] things like that – kind of that next step in the educational system – we feel it creates a nice pipeline for students to come from the Wichita Falls region or for those who happen to be at MSU getting their undergrad,” Huckabee said.

“This is going on in our community. We’ve got sexual assault, we’ve got domestic violence and we’ve got human trafficking going on with our neighbors, our people, right here. We have to step up as a whole community to bring ourselves the awareness, the education and the training we need to recognize the signs to change that in our community because 14 people can’t do it alone,” Michelle Turnbow, executive director of First Step, said.

Winter Storm Uri wreaked havoc over much of the Untied States, including Texas between Feb. 13 and 17, causing damage and extensive power loss. Midwestern State was not exempt from the harm. Burst pipes caused extensive flooding and damages in Sunwatcher Village Apartments, McCullough-Trigg dorms and the University Police Department.

“While I would’ve preferred that the pipe didn’t rupture…we’re getting out pretty easily on this. It could’ve been a lot worse in terms of damage and monetary loss,” UPD Chief of Police Patrick Coggins said. “It worked out, really, the best it could under the circumstances.”

The MOSAIC Cross Cultural Center hosted a “Say Her Name Vigil” March 29 to honor Black women and women of color who were victims of hate crimes and/or police brutality. The event included a two minute moment of silence, an activity where attendees had to match a photo of a victim to their story and a gallery of the women who died and their age.

“I want the people that attended today to walk away thinking about the Black women in their life. Think about the women in your life and what you can do to help them about and protect them. If I had the opportunity to talk to these women that have lost their lives due to police brutality and hate crimes, it would be that I am sorry. I am sorry this happened to you and you didn’t deserve this, even the women that were not mentioned tonight,” Amani Augustine, nursing freshman and assistant coordinator for WISE.

Vinson Health Center, Texas Department of Emergency Management and Texas Military Department partnered together in the latter half of April to vaccinate the campus community. MSU offered the Johnson and Johnson vaccine, but four days in, distribution was halted due to extremely rare cases of blood clots. Fortunately, they were able to acquire and distribute the Moderna vaccine.

“I would like to see every student on campus vaccinated. My reasonable goal, I thought, is 90%, but I think at this stage we’re lucky to get 70%,” Dr. Keith Williamson, Vinson Health Center medical director, said. “It’s getting down to the people who are more hesitant and afraid of the vaccine and don’t know what to make of it.”