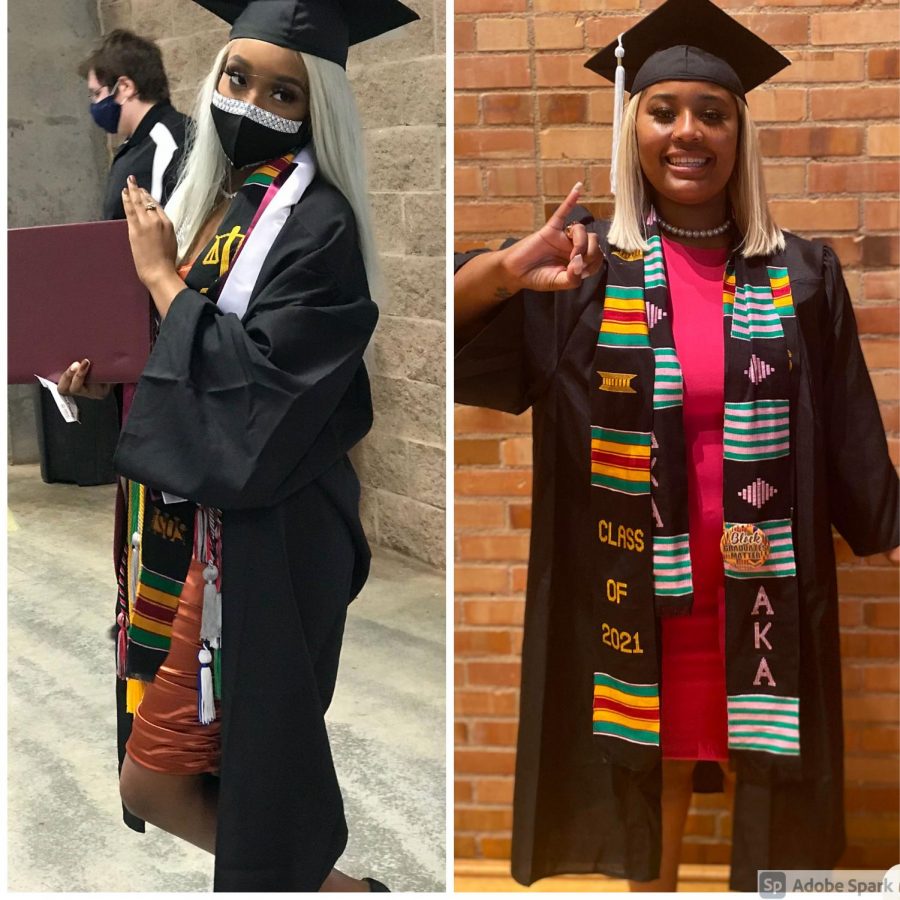 The MOSAIC Cross-Cultural Center hosted the Black Graduation Ceremony on Friday, April 30 at 10 a.m. The celebration was held in the Akin Auditorium located in the Hardin building.

The celebration honored African, African American and Black students that have completed their undergrad or graduate degree from Midwestern State. Cammie Dean, assistant vice president for Equity & Inclusion and director of The Priddy Scholars and MOSAIC Cross-Cultural Center, said the event was organized through the formation of The Black Student Coalition.

“The Black Coalition was made in 2015, and that was really a set of representatives from the B[lack] S[tudent] U[nion], NAACP and other student leaders who were passionate about unifying the Black students on campus but also about advocating to the university some of the student’s needs. Apart from the smaller events that the BSU does, The Black Coalition is about the big community celebrations. Their two biggest efforts each year are the Black Graduation Ceremony and then the Black Excellence Gala during Black History Month,” Dean said.

Dean said The Black Graduation ceremony is important because it is a major accomplishment for the individual students but also incredibly symbolic for where we need to be moving as people and where our nation needs to be going.

“I think for the students that initiated this ceremony, they knew that this was meaningful for the students in the Black community and their families, because it is still statistically less likely for our students to get a degree…as far as equitably educating all students, so it is an individual celebration for something that doesn’t happen often enough, but [it’s] also a community celebration and an acknowledgment of the dreams that are there and the challenges to achieving them,” Dean said.

. She is planning on taking a gap year before conquering her dreams and attending law school.

“I decided to take a gap year in between law school and undergrad so that I am able to build my resume, have more mentors and as of now, this summer of 2021, I plan on working at the district attorney’s office in Tarrant County. I was born and raised in Tarrant County, after law school, I’ve always planned on going back to help my community specifically and the opportunity presented itself, so I took advantage of it,” Lewis said.

Lewis said she is planning on being an assistant prosecutor with the district attorney’s office and gain as much experience as possible before she attends law school.

“Truthfully, I would just like to educate the youth in the Black community on the law and to inform them their rights. Later in life, I say within the next five to ten years, I would still like to open my own law firm. I feel like if I know both sides of the law, starting off as a prosecutor at the DA’s office then when it’s time for me to open my own law firm, I will be able to be a defense attorney and know how to work through prosecutors. I want to open it on the east side of Fort Worth where I was born and raised and be a safe haven for anyone who needs help. That’s the end goal,” Lewis said.

Mya Shamlin, graduating with a bachelor of arts in English and a minor in political science, said she will continue her education and head for law school.

“My goal in life is to be the district attorney for the state of Texas. My undergrad experience has taught me more about life and the importance of patience, [and] to believe in myself, regardless of the circumstance,” Shamlin said.

Shamlin said she is grateful for the mentorship she received through her degree plan and the gift of friendship that she has made over the years at Midwestern State.

“What I’ve taken away the most from this ceremony, and from Black Graduation, is the acknowledgment that I am always going to have to fight a little harder within my education and for my education, this celebration helps me know that everything was worth the fight. I am most proud of myself for continuing to grow beyond my four years with my major and minor,” Shamlin said.

Monique Fields, marketing junior, and one of the founders of the Black Graduation ceremony said the organization noticed other schools held a Black Graduation and agreed along with other Black leaders at MSU that this event was necessary and beneficial.

“We found out that a lot of Black students were coming here but not staying, or when they came, they left instantly. We thought to ourselves, what is going to make Black people feel important here. It’s a way to keep students excited about coming and staying; we all agreed that the Black Graduation would have a big impact on Black students here,” Fields said.

The first Black Graduation at Midwestern State was held in 2019. Fields said that since then, it has grown in size and budget.

“The first time we hosted the event, we were literally pouring our own money into it. We basically did it with only $100. We only had seven graduates that participated and today, we had 20. The MOSAIC Cross-Cultural Center also adopted the event which gave us more of a bigger budget to work with. It has grown significantly and there has also been more support from the university,” Fields said.

Lastly, Fields said that she hopes that graduates can walk away feeling accomplished and knowing that they defeated a statistic with this event.

“Walk away knowing you did it. Not a lot of people do. You defeated a statistic. I want them to know that they have a support base back at MSU always, as a Black student initiative, it is an annual thing, you can always reach back to your alumni. Be proud of yourself,” Fields said.