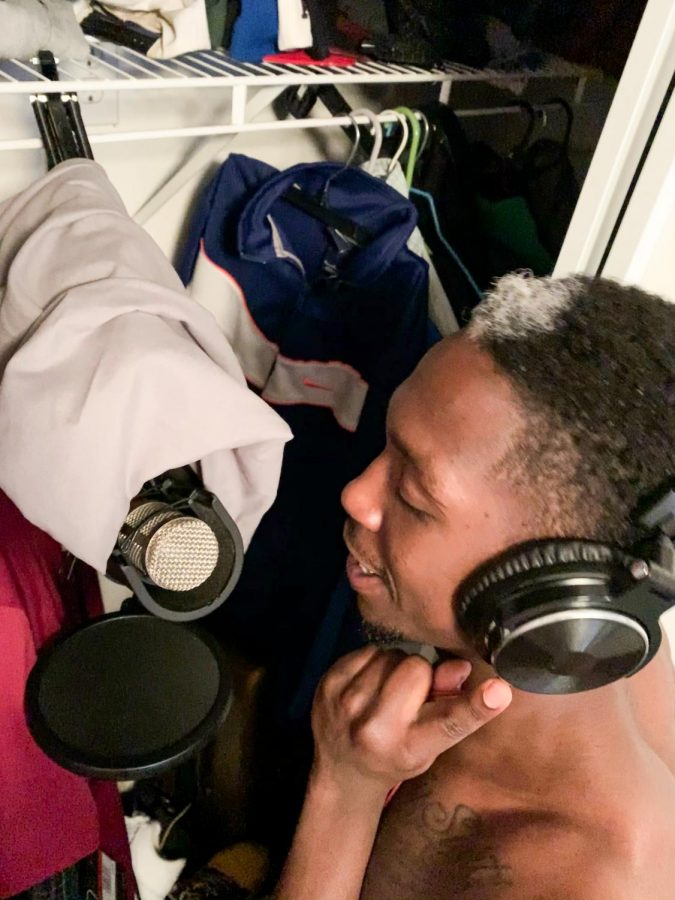 A Houston-born native, Terrell Wilson, applied arts and sciences junior, grew up in a whirlwind of music. Watching family members like Willie D., an American rapper who was best known as a member of the Houston rap group the Geto Boys, alongside Bushwick Bill and Scarface, only sparked his fascination for the cultivation of music.

“Music has played a part of my life forever; it’s my life,” Wilson said. “I just started venturing off into it and learning more about it as time went on.”

“I was a band geek growing up in elementary and middle school,” Wilson said. “When I got to eighth grade I had to choose between band and basketball, so I just left it alone until I got to college. I felt like basketball was more me; I could show my persona on the court and my demeanor.”

At 18-years-old, he made his first song on a track with one of his teammates and since then he hasn’t been able to stop making music. With now three albums named “923,” “Differences” and “Verity,” Wilson says it’s only up from here.

“My family calls me the chosen one of the family because anything I hop into I’m going to give it 110%,” Wilson said. “I’m never going to go into anything halfway locked in, because that would be an injustice to myself and [my family].”

Navigating the fast-paced basketball court and the obstacles it brings helped Wilson navigate his life and find who he was. Early on the name T-Money resonated with him and it closely followed as he determined his stage name; 7$ey.

“I had to be creative because I didn’t just want to be another T-money,” Wilson said. “The seven represents the seven days of the week because I go hard every day of the week, the money sign represents T-money and the -ey I added on for a little razzle-dazzle.”

He lives and breathes creativity and he recognizes his music as an eye-opening experience or Third Eye.

“My music is my own genre because it’s blind leading the blind in the world and I don’t want to fall victim to it,” Wilson said. “I try to put knowledge in my music and in order to listen to my music you have to be able to feel me. It’s real recognize real, and if you’ve been through an experience in your life where you went through a hard time, you can feel me putting that on the track because I’ve been through those situations and I’ve made it out of them.”

Determined to win,  Wilson named his label natural-born winner because he wins in spite of the cards he’s been dealt in life.

“I’ve never been to the studio, I record in my closet and I engineer my music myself. Everything is me, but I don’t let that stop me,” Wilson said. “I just find the beat, put it on a track, say a few words, find the tempo of the song and go with what I feel. I put my feelings into every song so you can really understand where I’m coming from. I trust myself and the entire process.”

He draws his inspiration for his lyrics from his heart and his experiences. He says he’s not from this world and his outlook on life makes him different from any other rapper out right now. He says he hopes that his listeners can understand that.

“You can make something out of nothing,” Wilson said. “Even if you feel like you’re the worst at whatever you do, if you change your mindset and manifest what you want you can achieve anything you want. The world is yours.”

Although music has become something he is very passionate about, basketball still always comes first. As a point guard and leader of the team, Wilson sees basketball as a lucrative business and nothing will come between him being the best he can be on that court.

“Whenever I enter the gym that’s my mindset, and that’s where I’m at for that time being,” Wilson said. “I’m on scholarships and I’m getting paid to do this. This is my job and I’m serious about the money.”

Despite his tunnel vision on the court, as an up-and-coming artist, it can be discouraging when your music isn’t hitting numbers or resonating with people like you planned it would, but Wilson finds beauty in this process.

“You have to stay down, nothing will happen overnight,” Wilson said. “As long as you stick to it and don’t let anyone phase you, you will succeed. I’m a firm believer in God and whatever path He leads me down I know in the end I am going to be a better person.”