Track is taking off and breaking records 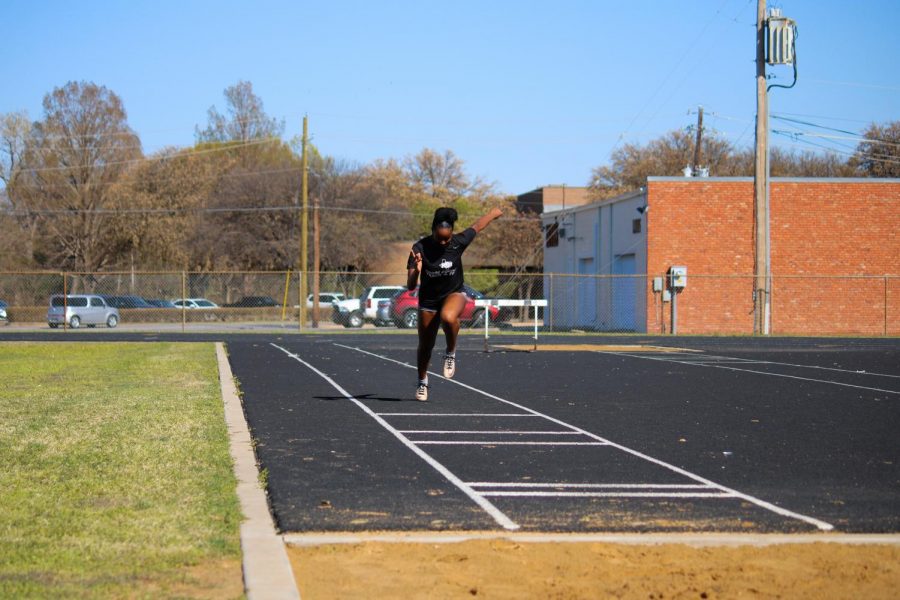 Peyton Lewis, track captain and finance sophomore, broke the record set in 1993 for MSU triple jump mark on Saturday, March 13 at the meet against UT Tyler at the Ice Breaker Classic.

“My goal is to perform better at each meet than the previous one. Even though I broke the record for triple jump and now it’s my name that holds that place, I want to always continuously attempt to break the records that I’ve even set myself. I’ve never broke a record before, so when I found out, I was like ‘Oh snap, my name is going to be at MSU for as long as it possibly can.’ It gives me the drive to work even harder,” Lewis said.

Lewis also performed in the 200-meter dash and long jump event, where she is currently placed second best for performance by just one second. She plans to break it.

Lewis said Kelsey Bruce, the head coach for track and field, is what also fuels the drive in her and is the definition of a coach and amazing leader. Bruce motivates her to be a better person on and off the field.

“She is incredibly supportive and positive. She truly brings out the best of us, whether we want to or not. When she first met us, she was very direct on what what she expected from us and was willing to push us. On bad days, she gives us this positive turn around and they immediately turn into good days. We have great practices every day and put in as much effort every day. The fact that Bruce came in so abruptly and has had so much impact on our program and team already is crazy – I love it. We needed it,” Lewis said.

Continuing a career in track and field for as long as possible is Lewis’ dream. She said the feeling is unbeatable.

“It is a dream of mine. I would love to continue jumping, especially triple jump, because it’s just the feeling I get when I jump into that sand, it’s great, I love it,” Lewis said.

Other captain, Taylor Carr, sports and leisure studies sophomore, also broke her college personal record, finishing her 400-meter dash with a time of 1:00.86.

Carr said she is going to try and improve to break the PR she set at last week’s meet at the invitational meet this upcoming Friday and Saturday.

To automatically qualify for the Lone Star Conference in individual races, a runner needs to be in the top 25; that is no problem for Carr.

“Right now, for conference, I’m sitting in eighth place for the 400-meter and surprisingly, like I said earlier, I don’t run the 100-meter but when I did for the one time at the last meet, I came in fifteenth. I hope to improve for the 400-meter and make it into the top five so I can get a better lane,” Carr said.

Bruce said that the accomplishments of the team can be accredited to the girls.

“I’ve been impressed by their resilience, welcoming of a new coach and accepting the challenge to excel. I came in with a lot of expectations and all of them have risen above that. Llana Anderson, is only the second hammer thrower to be in this program and she works more independent than the other girls and does a great job with that. Amerhyst Woolf, ran amazing and won the college division for the meet. Every week, Woolf has been improving in her workouts. It is nice to see how the team can come together because Woolf is one of our older girls and her alongside with Alexandra Feller have been great leaders on the distance side. On the sprint side, they are mostly young. It is so cool to see how this group can work hard together, support one another and have committed individually to making themselves better,” Bruce said.

According to Bruce, the next meet against Oklahoma Baptist University will be different because it is a non-conference meet, but an invitational, and that a few girls will be running events that in the past they haven’t.

“OBU is not in our conference. This week, and really every week, our goal is to be competitive. Sometimes in track, it is easy to get caught up in marks and times. I want them to just be competitive, and attempt to win every chance they get. At this meet, we have a lot of girls running in events that they usually do not run in. The point is, working on different skills and really making them well-rounded runners. Some are moving down and working on their speed, while others are moving up and working on their strength. I definitely think they will become more well-rounded after this weekend,” Bruce said.

The next opportunity to see the Mustangs race to the finish line will be this Friday and Saturday, March 26-27, at the Hurt Memorial track located in Shawnee, Oklahoma against Oklahoma Baptist University.