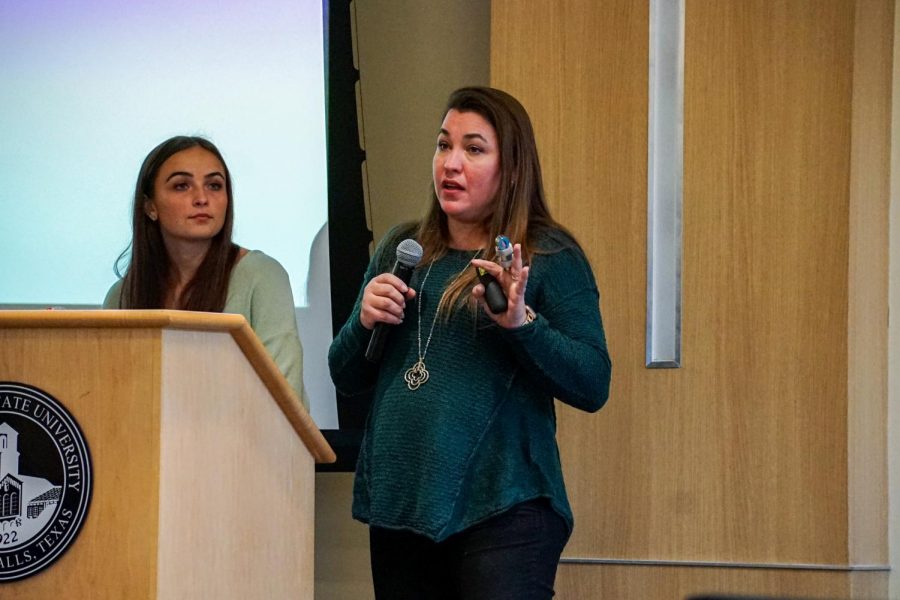 In the Legacy Multipurpose Room, March 17, Violence Intervention and Prevention peer educators and the office of Title IX  held a night of learning about the dangers of human trafficking, an issue that occurs in almost every community.

“Human trafficking is an issue that affects everyone, and we need as many people as possible to be knowledgeable about the topic to help keep students safe,” Laura Hetrick, director and coordinator of Title IX, said.

The special guest speaker at the event, Catherine Earley, assistant professor of social work and volunteer at Traffick 911, defines trafficking as the exploitation of vulnerability.

“It’s definitely not at all what you’ve seen in the movie ‘Taken.’ Really trafficking in its essence is about exploitation,” Earley said. “Trafficking is not limited to third-world [countries]. It’s happening in prominent, affluent communities, all around the world, including right here in Texas. The question isn’t really ‘Where is human trafficking?’ The question is ‘Where isn’t it happening?’”

Texas ranks second in the country for the most human trafficking cases. The Texas Triangle is the name for the area between DFW, Austin, San Antonio and Houston, and Earley has seen many cases in which victims of trafficking were taken all around the Texas Triangle. No matter what age, race, religion or social class a person falls under, she says anyone can become a victim.

“Gang members are finding that they can make more money trafficking girls than they can selling drugs. As a matter of fact, rival gangs are now even partnering up because this is so profitable,” Earley said.

Although traffickers often find their victims in online spaces like social media or dating apps, traffickers also recruit in schools. Early described a personal experience in which her daughter, Hannah Earley, thought someone involved in trafficking was attending her middle school in Wichita Falls. Earley consulted human trafficking experts, and they said the student in question fit the profile of someone recruiting victims for trafficking.

“When Hannah was in middle school, she started asking questions about this kid that had shown up in school. The kid didn’t quite seem the right age and was really intensely interested in Hannah spending the night at her house, not just Hannah, but a few other kids,” Earley said. “She kept insisting for months and months. I finally went to the school counselor…. She said ‘Oh the kid is on our radar. We’ll take a look.’ The child disappeared completely the next day.”

The average age of children being forced into sex trafficking is between 12 and 16 years old. Traffickers typically approach a child who has run away from home within the child’s first 48 hours of being out on the street.

“People call pimps street psychologists. They can look and see vulnerability very quickly. If they look and a kiddo is looking down or looks afraid or is carrying a backpack, that’s a perfect target. There’s a vulnerability. They can offer their help. By offering help, they’ve found someone that they can exploit,” Earley said.

Similar to how a mousetrap requires some bait like cheese or peanut butter to lure the mouse in, traffickers or recruiters use bait to get their victims to walk into their traps.

“Somebody may see a kid at a bus station and say ‘Oh I see you’re looking for Wi-Fi. You know there’s a McDonald’s right across the street. I’ll buy you a burger. I’m going there anyway. If you let me buy you a burger, you can use the free Wi-Fi.’ That exact scenario happened. She walked across the street. A friend pulled up in the car, shoved her in the car, drugged her [and] trafficked her. I think that one was eight days. That was a particularly brutal case,” Earley said.

The average lifespan of trafficking victims is reported to be seven years. This could be due to a number of reasons, including malnutrition, overdose, untreated STDs or murder. However, there are survivors who make it out of their situations and go on to live their full lifespan.

“At my community college, in my psychology class, we watched a documentary [about human trafficking], and I was very moved by it. I wanted to do something, but I guess I made up excuses. Now, no matter how busy I am, or how difficult it is, I really want to find ways to help people become aware of it. I feel like we need more of this discussion because it’s happening everywhere,” Regina Agbo, nursing junior and event attendee, said.

Sherilene Morancie, geoscience senior and Violence Intervention and Prevention peer educator, agreed students need to know what trafficking situations look like so that if they are being recruited by a trafficker, they will know.

“As of recent, there were stories about what’s happening here in Wichita Falls, and a lot of people didn’t believe it [human trafficking] was happening here before, so we just wanted to relay what exactly happens and to be aware of it,”  Morancie said.