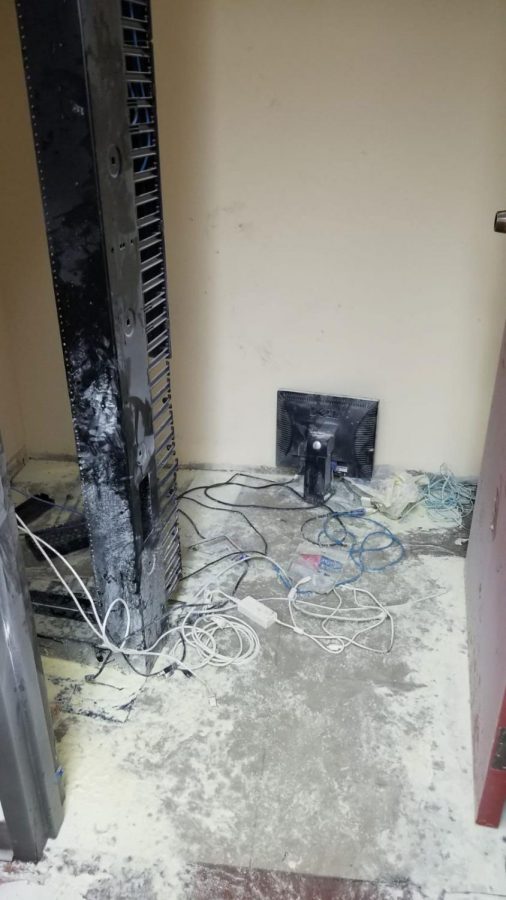 IT closet in the piano lab caught fire and was put out quickly, March 8.

On March 8, students and faculty were asked to evacuate the Fain College of Fine Arts building. A corroded water pipe had burst causing a flood and a small electrical fire.

“There was an air handler on the second floor above the tool crew area in the scene shop area and there it’s filled with chilled water. One of the lines, the controller lines, had a drain on it that rusted out and broke,” Kyle Owen, associate vice president of facilities, said. “It started dumping the chilled water on the floor. There are a couple of drains in that mechanical room but as we learned they drained some water but not the volume waters we had going down it because of the break, so it starts spilling over.”

The water caused a flood in the B building and extended to areas of the C building. While handling the water, smoke started coming out of room B124, because a small electrical fire had begun. The uninterruptible power supply (UPS), a device that provides battery backup when the electrical power fails, in the IT closet was still charged when it got wet causing it to start smoking. The fire was short-lived as recruiting coordinator Andrew Brinkman put out the fire with a fire extinguisher.

“Ninety percent of the area that was flooded was on concrete floors which [was] clean[ed] with custodian equipment pretty easily. In the carpet area we’ll dry those out but there’s one room, the drawing studio. It has some tiles that are damaged, but that should be replaced [March 10] and cleaned up. However, the piano lab is of concern, the discharge of the power extinguisher created a pretty good cloud of material throughout the room,” Owen said.

The damage to the piano lab is still to be determined. The room is not in clean conditions due to stopping the fire, but it will be professionally cleaned. Once clean, all the equipment will be connected and tested.

“The piano lab area has a backroom which is not part of the lab it’s part of a room where IT stores network equipment. Most of the damage actually happened in that room, in the network equipment room, and that equipment was gone,” Martin Camacho, dean of Fain College of Fine Arts, said. “It became unserviceable immediately during the flood luckily IT reacted very fast. My understanding is that they used spare parts and we are up in running already 24 hours after this incident happened which is great.”

A room in the art department, usually used for independent study, was affected by the flood as well. The damage was very minimal since they managed to save the artwork in the room. No art classes were canceled that day.

“We were really fortunate that we did not sustain a lot of major damage luckily it was in a studio space that we didn’t have a lot of electronics or high tech equipment so that was really fortunate,” Leah Gose, chair of Juanita and Ralph Harvey School of Visual Arts, said. “There are a few things that we might need to take a look at like some lockers that were on the floor just to see if that was damaged but most of the damage that we sustained was ceiling tiles you know just from getting wet and waterlogged and some insulation that could not be repaired so we were really fortunate.”

The incident was early in the morning and some faculty had yet to arrive on campus. Nonetheless, the response was immediate and the situation was quickly controlled.

Police and firefighters had also arrived at the scene. Camacho said he was impressed by the response time the incident received as it was quick.

“My overall impression is that number one we were very lucky because the potential damage could have been very large and the actual damage appears as of today very minimal. That’s number one and number two as I just mentioned, [I am] really, extremely happy with the way in which all units, all relevant units, responded to the incident and that really made a difference,” Camacho said.