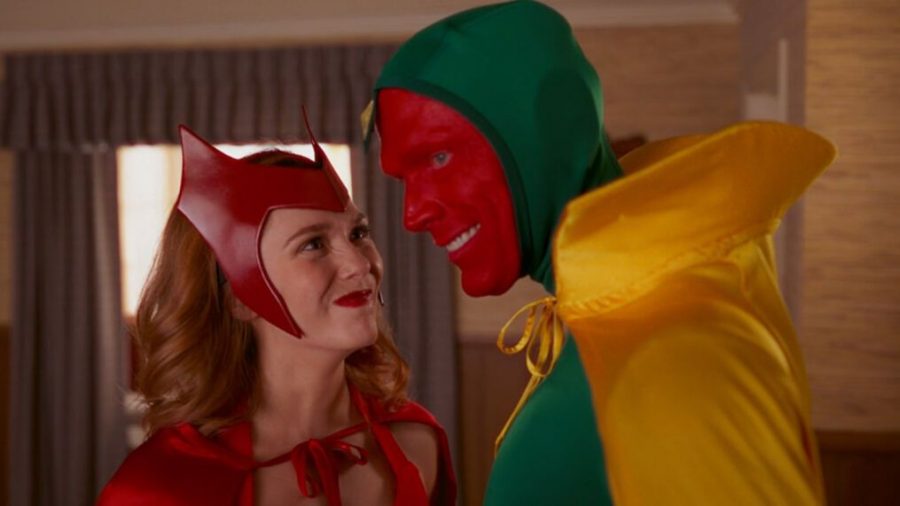 Marvel’s stab at creating Disney+ tv shows is off to a strong start with their new hit “WandaVision,” proving that although their classic characters haven’t been on the big screens in over a year, they’ve still got what it takes to make a hit. “WandaVision” quickly drew widespread attention with its weekly installments of short, cliff-hanger-filled episodes, quirky themes, and mysteries for fans to pick apart and speculate about. In a mere eight weeks, the show has snowballed into something even the biggest Marvel fans and experts couldn’t predict

“WandaVison” drops viewers into the idyllic, suburban bliss of Westbrook, New Jersey circa 1950-something. The square aspect ratio, black-and-white visuals, and jaunty theme all mirror the wholesome antics of the classic “ Dick Van Dyke Show” as Wanda and Vision (Elizabeth Olsen and Paul Bettany) settle into married life in a new town, hiding their powers from their neighbors and friends. The plots of the first few episodes are simple, involving miscommunication between the couple that leads to silliness or the couple using their secret powers for a talent show performance. There are a few hints of what’s to come, but it’s mostly just fun.

Each episode advances this super duo into a new decade of television with its own sitcom trends and standards to spoof. A stand-out moment is when color washes over the screen, ringing in the 1970s and there’s a fun gag as Elizabeth Olsen, the sister of Mary Kate and Ashley Olsen, parodies “Full House.” But as time passes, cracks begin to form in Wanda’s perfect world and the viewers at home aren’t the only ones with questions. It’s hard to discuss the later episodes without spoiling anything, so I won’t even try, but it’s safe to say that Wanda’s perfect life starts catching the eye of the outside world, and not in a good way.

I enjoyed how “WandaVision” veers off course from the normal style and themes of Marvel, as it chooses to pause and explore the psyche of one of its most interesting, but underdeveloped heroes. There’s hardly any of the usual fights and the Thanos-inspired plot of the first two dozen films feels like a million miles away. The creators still manage to wrangle in some minor characters from the films and comics (Kat Dennings, Kathryn Hahn and Teyonah Parris are outstanding), but this is definitely new territory for both the creators and fans.

I only have minor quibbles with “WandaVision” and they mostly come when looking at the show as a whole. I felt like the first few episodes promised a lot that went undelivered and I was hoping that the less than super plotlines like the dinner party and magic show in the first episodes would tie into the bigger picture in a more interesting way. I felt like the ending was rushed, as the writers chose to dump exposition into fight scenes and leave key characters underdeveloped as the final credits rolled. All in all, though, I’m a huge fan and enjoyed the ups and downs of a good, but not life-changing show.

One of my favorite parts about “WandaVision” though is its weekly episodes that generate shock waves across social media. It’s fun to see the die-hard fans and casual viewers speculate and react to each new episode, churning out lofty theories that rarely pan out. This year has been off to a slow start in the pop culture sphere, so it’s nice to have something that everyone can enjoy collectively and come back to every week and I’m excited that Disney is continuing this trend of releasing new episodes on Fridays for their upcoming Marvel projects.

So if you haven’t logged onto Disney+ once this year, this is your sign to go give “WandaVision” a shot. Its cheesiness and shockingly short episodes quickly grow on you, delivering a satisfying mystery and fascinating character study all in a brief six hours.