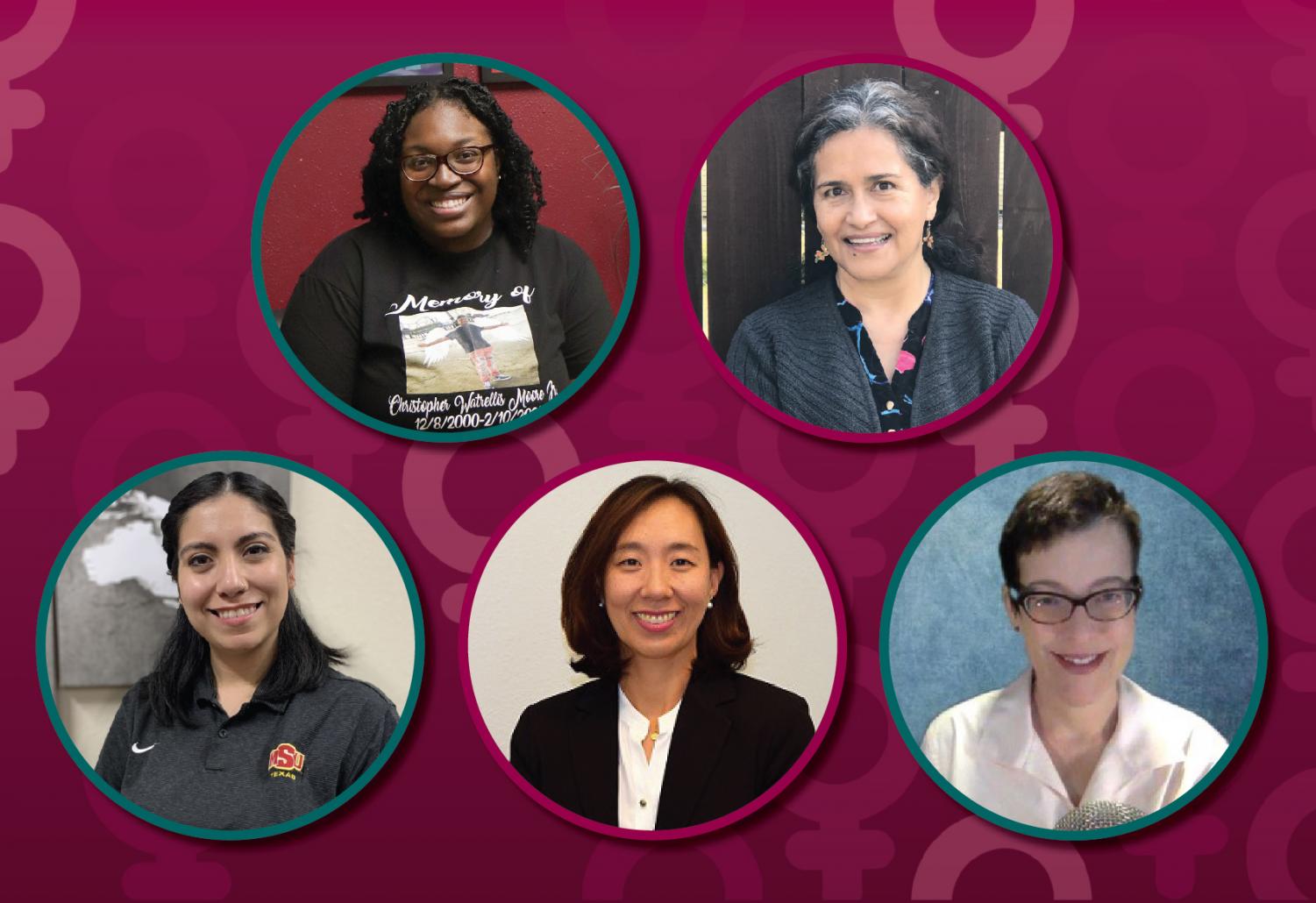 Collage of some standout women at MSU Texas. (graphic by Abbigail Jones and Omar Combie)

Collage of some standout women at MSU Texas.

Celebrating the women of MSU Texas

Kangudja has worn many hats at MSU Texas. From founding the choir group Echos of Gospel to being treasurer of the MSU chapter of the National Association for the Advancement of Colored People to Delta Sigma Theta sorority to being Vice President and Black Student Union President, Kangudja took every opportunity given to her.

“I held all these different leadership positions I think mainly because people believed in me, even when I didn’t necessarily believe in myself,” Kangudja said.

As a leader, Kangudja prefers to work behind the scenes and takes a collaborative approach when working with others. Being organized is also a necessity for her to stay on track.

“My leadership style varies, I just go with the flow. I’m very organized, I like notes, I like having an agenda because I can talk and we will go everywhere around the world in 2.5 seconds if we don’t have an agenda….” Kangudja said. “I like to take a collaborative approach because I like to seek out the best in people just like people sought out the best in me.”

Kangudja has had to make statements that not everyone liked but that didn’t stop her from sticking to her instincts. Her advice to women working their way up the ranks is to stand their ground.

“Standing my ground, no matter what. My gut, my instinct, I have it for a reason. If I felt like things weren’t right, even if I felt like it was going to be just me, the only person who had my back, I had to make sure I was firm in that. You’re going to say some things that people are not going to like and you need to stand on that….” Kangudja said. “You have to reaffirm yourself, you have to let yourself know that ‘I wouldn’t be here if people didn’t like me.’ Just because one person or 10,000 people say [hateful things] people put you in that position. You ended up in that position for a reason.”

Montoya grew up in Puebla, Mexico, and moved to the United States when she was 26 to get her Ph.D. in Spanish and Spanish American literature with a second concentration in Portuguese at the University of Tennessee, Knoxville [Tennessee]. Growing up in a traditional male-oriented culture gave Montoya the grit to have her voice heard.

“I was taught men make the important decisions and take care of the important things; so, it was always a battle to have my voice heard and counted. That gave me a lot of resilience and determination, but also made me aware of even the most subtle ways of discrimination,” Montoya said.

The women in Montoya’s life have shown her the strength women can hold in groups. She is proud to be a woman and said that women’s culture is valuable to society.

“The ability of women to organize as a group, to form strong bonds and help each other out. I used to see that often with my aunts. I come from a family of loud strong women, and it was very self-assuring to see them act as a group, not only in the gatherings cooking food for the entire extended family but for when there was, for example, a family emergency….” Montoya said. “I also think what makes women special is that they experience pain in more depth, the simple fact that they can give birth and endure the pains of labor tells you that they are designed to deal with pain, probably better than men.”

When asked what advice she would give a woman in her 20’s, Montoya said the importance of valuing yourself.

“The value you give to yourself is how other people will treat you. Be confident in your decisions, but willing to change course if you have to,” Montoya said. “Life is not a sprint but a marathon, so make sure you learn well each lesson life gives you in order to move to the next stage without baggage. Be willing to make mistakes, but don’t be proud of them, it is the only way you will really learn.”

Ysasi, a Wichita Falls native, received her bachelor’s degree in philosophy and film studies. Upon entering the workforce, Ysasi got her foot in the door with admissions as an evaluator.

“I learned that I really like working in higher ed. When the next opportunity that arose on campus opened up, it was in an immigration advising role, and so I applied for that, thinking I could utilize my philosophy skills in terms of the critical thinking that went into that degree,” Ysasi said.

From the assistant director of the Global Education Office, Ysasi has now moved back to the admissions office to grow further in her career.

“I’m going back to admissions, which is great. This is more of the role that has been working with the welcome center, campus tours, mustangs rally and some of those signature events for students. I’m really excited to bring that skillset and excitement of serving students and giving information to prospective students and trying to get them to enroll here at MSU,” Ysasi said.

Ysasi’s pieces of advice for women in the workforce are to be respectful in every instance, never burn bridges with someone because of a clash in personality, put aside differences when working toward a common goal and don’t ignore evidence of a toxic workplace.

“Being aware of a toxic work environment and learning the resources to speak up for that, I think is such a relevant issue for us as women, as workers. We may not always be aware of the signs that we’re being taken advantage of or that we’re being harassed because it might not be blatant. It might be these microaggressions that happen,” Ysasi said. “It’s not always in a sexual manner. It’s in workloads. If you’re willing to take more things on because you want to shine as a star worker, sometimes people will see that and see what else they can push your limit on because maybe you just don’t know how to say no to things.”

Choi grew up in South Korea and received her bachelor’s in education and a master’s in exercise biomechanics at Yonsei University. She then went on to secure her Ph.D. in exercise physiology at Kyung Hee University while raising her 6-month-old baby. Yearning for more education in her field, Choi packed herself up and moved to the United States.

“My life path was a little bit different from others. My whole education was from Korea. I came to the United States to do a post-doctoral fellowship at Texas A&M International University, Laredo and then spent a year in UT Austin,” Choi said.

Planning on only spending two years in the US, Choi began applying for faculty positions at universities just to see what she could get. Choi eventually landed the tenor track assistant professor position at MSU in 2014.

“I tried 16 applications and only MSU contacted me. I got a phone interview first and then a campus visit. The faculty here impressed me so I got the job,” Choi said.

Now tenured and promoted to associate professor, Choi is also the graduate coordinator of the exercise physiology program. She attributes much of her success to never giving up and urges everyone to keep going.

“I encourage my friends, students, colleagues not to give up! Society is not going to give you many chances, but don’t give up because I strongly believe how I became a professor was because I try really hard. I never give up. I’m not the really smart one, some have higher potential, but they give up because it’s too hard,” Choi said.

Lewis worked in the corporate world and spent some time in the institutional research office at MSU Texas before becoming a professor.

“I always thought it would really cool if I could teach. I just didn’t know that I would have the chance to,” Lewis said. “I really love Wichita Falls and I have family here so it’s not like I was willing to get up and go somewhere else. Then this perfect position came up. It ended up being perfect [and] I didn’t know it at the time.”

“It’s okay not to have all the answers. I used to feel like I needed to always have the answer and that’s a lot of pressure to put on yourself. Nobody has all the answers,” Lewis said. “I think I used to be nervous about asking questions because I thought I might look dumb or something… I was too worried about that. Asking questions is a very smart thing to do, so don’t be afraid to ask questions.”

Grateful to be in her position, Lewis stressed that successes shouldn’t define someone’s worth.