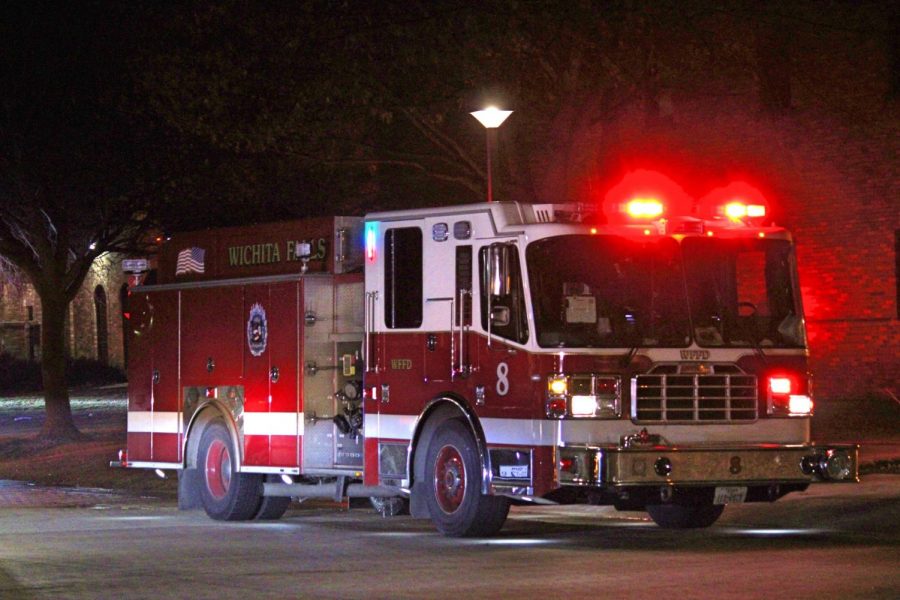 A fire occurred on the first floor of Pierce Hall around 8:30 p.m. Saturday night.

“We were both playing video games and then we heard the fire alarm, and we quickly realized that it was real. It was not just a drill,” Luke Craddock, Pierce Hall resident and theatre performance freshman, said. “As we walked outside and the fire trucks started coming down the promenade we were like ‘Alright, this is a real thing.’”

Trever Sherman, Pierce Hall resident and finance junior, said he smelled gas and smoke when he left the building.

“I went up to the front and I remember seeing a firefighter enter through the exit side for the first floor, and the first floor was just covered in smoke,” Sherman said.

Todd Mudd, Battalion Chief of the Wichita Falls Fire Department said Station Eight put out the fire and cleared out the smoke.

“It took us about 10 minutes to get to the scene of the fire and put everything out,” Mudd said. “There was a large amount of smoke in the hallway, and we were given the report of a possible [fire]…They searched that end of the hall where that room was, got to that room, opened the door and found a small amount of fire in one of the rooms. They identified it as being in the area of the TV.”

The fire was put out immediately and only the property was damaged.

“It’s all good. Nobody got hurt. They’re probably going to have to displace quite a few people in this lower level just because of the amount of smoke that was in there,” Mudd said. “Other than that, the damage was just contained to that one room; [there was] just lots of smoke damage.”

One of these displaced students includes Jason Thomas, a peer educator in Pierce Hall and kinesiology senior.

“I went to grab some stuff. It smells god-awful, so they are moving me to building eight,” Thomas said. “I’m just glad that everybody’s safe and everybody tried to stay calm in this stressing situation.”

After Residents’ Assistants moved everyone out of Pierce, residents were advised to stay in Legacy Commons until they received any other instruction.

These students remained in Commons for a few hours where they were served pizza and snacks.

“I’m hoping that I’m going to go back to my room soon, because I live on the third floor and they’re saying it was only on the first floor,” Kelechi Iwunze, Pierce Hall resident and political science freshman, said. “I haven’t really heard anything from our RA’s.”

Mudd said that Station Eight cleared the smoke and made the building accessible, but it would take a while for the affected rooms to go back to normal.

“There’s going to be a residual smell in there until they get a professional company here to clear out some of the smoke,” Mudd said. “The furniture, the mattresses and the clothes are going to have that smell on them for a long time.”

Most of the first floor will smell like smoke for a while, but the rooms closest to the fire will be uninhabitable until further notice.

“I was a little scared because [they] thought it was close to my room. If all my stuff burned up, I would’ve cried. I was trying to stay calm,” Thomas said.

Iwunze said it was more of an inconvenience than anything else.

“I wasn’t feeling surprised or anything… There was an alarm that went off last semester or earlier in this semester and it wasn’t that big of a deal … I didn’t know it was real. I thought it was a drill,” Iwunze said. “I didn’t smell any smoke either, so I didn’t know if anything was happening.”

“Whenever there’s a fire drill happening, in the future, any time you hear [the alarms] even if you think it’s a drill, you need to leave because it’s better to practice and know what to do when it actually happens,” Downs said. “If you were to stay… there could’ve been severe casualties or maybe even deaths and we want to avoid that at all costs.”

Now more than ever, Mudd feels students should take note of how to prevent fires and how to leave the building safely if there is one.

“It’s good that the students self-evacuated. We didn’t encounter any problems there. I know that there are some rules as far as things that we can do in our rooms. There’s a reason why we can’t cook or have candles and all those kinds of things,” Mudd said. “Let’s try to remember those rules and don’t be complacent in that area because things like this happen.”