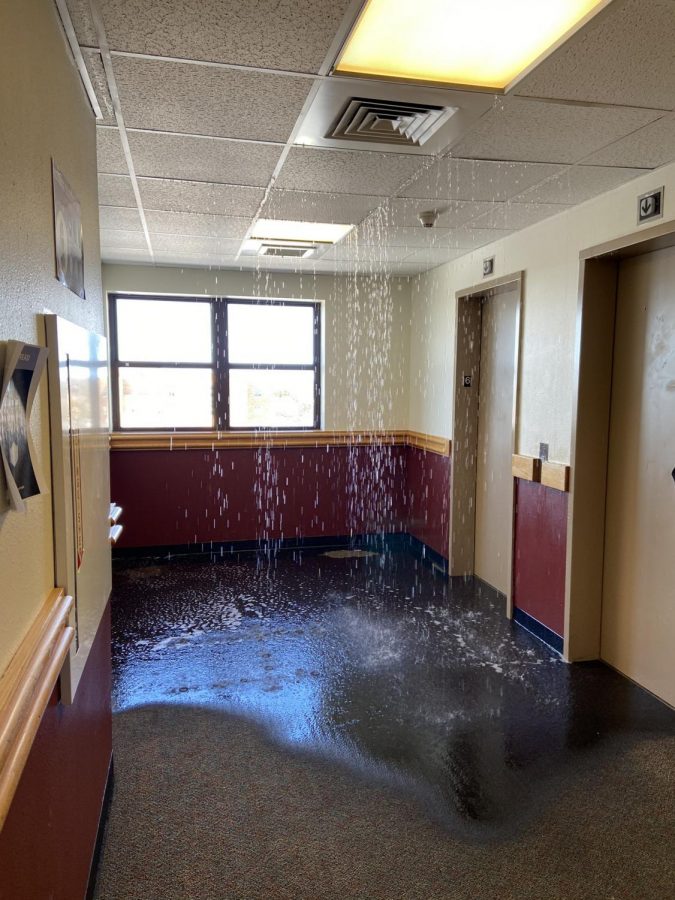 A fire sprinkler pipe in Sunwatcher Village apartments burst from the cold and flooded apartments on Feb. 17, prompting students to move apartments in freezing weather.

“I thought there was a fire at first. I was in my room when I heard the fire alarm and thought the stove was smoking… so I thought ‘Oh Ashleigh is making potatoes again.’ I came out to look and saw water and [Kassidy] putting on her rainboots,” Rebecca Crabtree, theatre education junior, said.

While Kassidy Knight, accounting junior, was grateful there wasn’t an actual fire, Crabtree said the water that came up soaked the carpet and damaged everything touching the floor.

They left their apartment during the water extraction process, came back and decided to ask for a new place to stay.

“We just asked for a place to stay for a couple of nights until [the water] got cleaned up, but we ended up just asking the next day if we could just completely move out of there,” Miller said.

Housing was prepared to offer students a place to move if they chose.

“Going into this event, seeing the forecast, our housing administration was proactive in putting together a list of every available bed on campus in the event of water damage, in the event they had to move people around. So, they were ready for that,” Keith Lamb, vice president of student affairs and enrollment management, said.

During this whole process, Miller, Crabtree and Knight fell out of the loop of communication.

“We were pretty left in the dark for a majority of things. They didn’t really tell us anything, so it was a lot of confusion and no answer for a while,” Crabtree said.

Even after moving, the girls had another, smaller flood in their new Sunwatcher apartment. They said they were still glad the fire alarm hadn’t signaled an actual fire.

“I’d rather two floods than a fire,” Knight said.

There were three floods in McCullough-Trigg on Feb. 17. Each flood resulted from a burst pipe, one of which was in front of the elevators.

“My staff members jumped into gear immediately and did what they could to minimize the damage. I got a Facetime call from one of my RAs showing me the initial damage on the 3rd floor,” Lauren Kam, hall director of Pierce and McCullough-Trigg, said. “I was shocked but so thankful that the flooding was occurring in a room that was unoccupied.”

Although the flooding didn’t force any residents out of their rooms, it did disable the two elevators in the center of the building.

“Having the elevators not working has been the biggest issue for our staff and residents in Trigg,” Kam said.

“I live on the fifth floor and it is difficult to go up and down the stairs every single day when I need food or go to class,” Gardener said. “It’s very inconvenient, especially when I’m asthmatic.”

Kyle Owen, associate vice president of facilities services, said he recognizes and agrees that this puts a strain on moving around the building.

“I’m well aware it’s inconvenient to people, and it’s an inconvenience for the people that report to me,” Owen said. “They’ve got to go up and down, carry equipment up and down. It’s in everybody’s best interest to fix things like that in a hurry.”

While MSU staff hurries to get the elevators back in working order, residents of McCullough-Trigg are adjusting their schedules to account for taking the stairs.

“Usually I’m able to stop and go to my room to eat lunch or take a break before I go to work, but now I have to bring everything with me in order to be prepared for the day,” Gardener said. “That way I don’t have to go up and down five flights of stairs.”

Gardener said she wants to know how long she will have to work around the broken elevators.

“I’m wondering when it will get fixed. It’s been almost a week since it’s happened, and I know that they’re having a hard time getting everything done in a timely manner, but I just wonder when it will happen,” Gardener said.

Owen estimates the elevators will be out for two or three weeks, and Kam appreciates the resident’s patience during this time.

“Our Trigg residents are being really gracious about the situation as we know it has wildly inconvenienced them,” Kam said. “Some have voiced their concerns and frustrations, and we are trying to quickly address those concerns… such as the elevator getting fixed in Trigg.”

According to Owen, the elevators will likely cost Residence Life and Housing around $20,000, a number that is out of the university’s control.

“I know [the situation is] something that’s out of their control because you can’t really control the snow,” Gardener said. “You can’t control when the blizzard comes into town.”

Following a power outage on Feb. 15, a pipe burst that flooded a UPD server room and damaged their equipment and property.

“All of our focus was on doing what we could to make sure that operations stayed going [during the power outage] and we were doing all our critical functions,” UPD Chief of Police Patrick Coggins said. “Then [we] realized the water pipe busted and I saw the water spreading across the room, and I thought ‘What now?’”

A back-up generator was used for essential operations, but the heat was not essential. When power was restored and the building’s heat came back on, the pipe warmed up and burst, flooding a server room.

“I was here the morning that the power came back on… so I was present when the leak was discovered, and I immediately contacted the director of facilities,” Coggins said. “Facilities was very quick to jump on it. We spent a lot of time out front trying to locate meter boxes and shut the water off.”

Not only was the property soaked, so were a few servers.

“Our [Information Technology] professionals came out that day [as well as] our facilities professionals. They got the place cleaned up. They took the servers and dried them off,” Lamb said.

The police were never unable to do their jobs; it was only a matter of working around the flooding and missing servers.

“While we maintained operations throughout, 24/7 we maintained dispatch and police patrol operations, all of our other operations primarily were supporting those two functions to make sure we stay operational the whole time,” Coggins said.

For a few hours during the power outage, the UPD’s ability to keep track of the fire alarms on campus was hindered.

These walks only lasted a couple of hours that Monday morning. The only thing left for the UPD to worry about is the cost, and Paul Chappell, chief information officer, estimates $3,000 to replace the damaged equipment.

“While I would’ve preferred that the pipe didn’t rupture…we’re getting out pretty easily on this. It could’ve been a lot worse in terms of damage and monetary loss,” Coggins said. “It worked out, really, the best it could under the circumstances.”

Legacy had heating issues on one side of the building
The football locker rooms had some flooding from a rooftop air conditioning unit
A hose leaked water by the West Campus Annex
The city couldn’t pick up trash during the snow, so dumpsters overflowed, and the Grounds Dept. had to move the excess trash.