“Never give up”: Ed Schultz’s powerful road to recovery 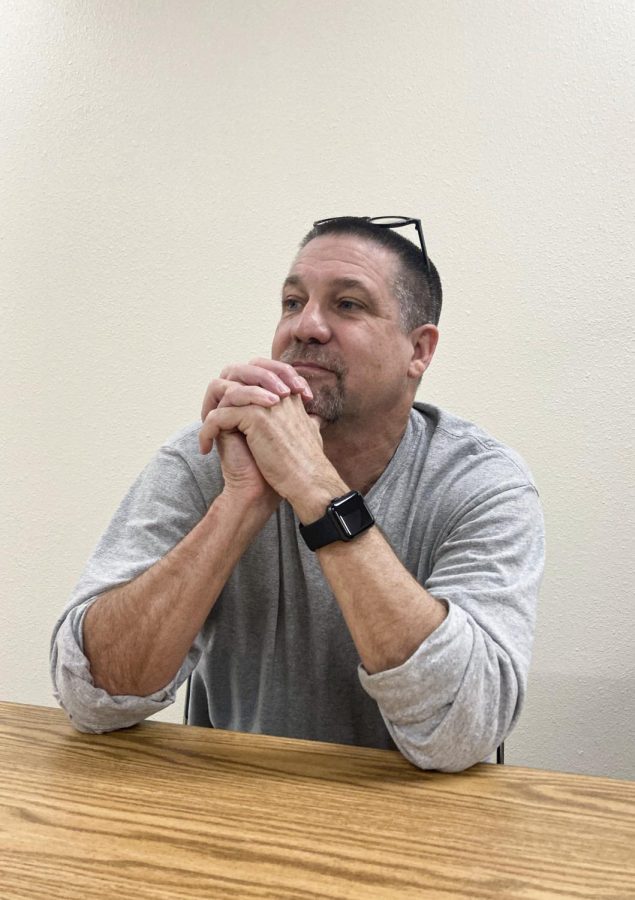 He crossed the line and nearly lost everything. A spiraling disease left him alone as he looked homelessness in the eyes. He couldn’t pay rent, hold a job and was on foot desperately struggling to survive.

“I was a wreck. I was really struggling because alcoholism is the only disease that will tell you you’re fine,” said Ed Schultz, associate professor of special education.

After spending the early years of his life developing a mental obsession with escapism, he realized he’d been blindly running away from his own sense of reality and sanity. Lost and on the verge of losing everything, he knew he needed saving as he drowned himself in alcohol.

“There’s a door that people cross and once you go through that door it’s done,” said Schultz. “By the time people realize they have a problem they have already walked through the door, they’ve already crossed the line.”

In 1989, he went to Red River Hospital and was diagnosed an alcoholic. A young, brittle man faced his extreme addiction head-on as he spent the next three years of his life physically and mentally pulling himself in and out of sobriety. In 1993 something clicked and as he found new ways to cope, he entered the longest streak of his sobriety. 27 years later with no alcohol in sight, he stands strong representing a yearning desire to be a better person.

“I learned a lot,” said Schultz. “Those moments of sobriety were still growth and it was just a part of the process.”

What started as innocent parties with friends, led to binge drinking at bars, football games and partying days on end without any sleep. These habits closely followed him and intensified as he started his freshman year in college at MSU Texas.

“The root cause of all people’s drinking is trying to escape some kind of pain, there is some pain somewhere,” Schultz said. “Sometimes it’s abuse from family members and sometimes it’s something inside that says no one cares about me and I’m nothing. Alcoholism is a lonely business, you may be surrounded by a lot of people, but still, feel totally alone.”

More interested in the party life, Schultz experienced a two-time suspension because he couldn’t keep his grades up or make it to class.

“I was more interested in the party life than academics and I couldn’t make school a priority,” said Schultz.

After his second suspension, he didn’t return to school until he was able to strongly grasp onto his sobriety in the early ’90s, but that journey to sobriety consisted of him living through some of the darkest days of his life. Tragedy struck. He lost his daughter and almost drank himself to death.

“That was the final nail in the coffin as far as changing my life,” Schultz said. “The death of my daughter had an impact on how I planned to live the rest of my life and I knew drinking was not going to be a part of it anymore.”

A rebirth occurred; a rebirth of attitude and a rebirth of direction. Schultz returned to college and never turned back. He stayed dedicated to his education for 11 years straight receiving his bachelor’s, master’s and Ph.D.

“I was able to focus on school and really discover who I was,” said Schultz.

Schultz found his passion in being an educator. He started in jr. high as an educator who worked with kids with academic learning disabilities, but children with behavior disorders were his biggest teaching; kids with mental health issues, who hated school and used drugs to cope.

“I think one of the benefits of getting help for a problem is that you develop empathy and you can help where no one else can because you understand. Every kid in this country has to go through school. It’s really satisfying, we’re programming all kids in this country,” Schultz said.

Schultz goes on to share his motivational road to recovery and with four daughters to continue to live for and students to mold, he hopes to show anything is possible.

Schultz didn’t get to where he is today without immense help from the 12-step program; his village. Those that helped shape him into the man he is today will not live on forever but the power they pass on will.

“I want my legacy to be like the people who helped me,” Schultz said. “A legacy of power.”