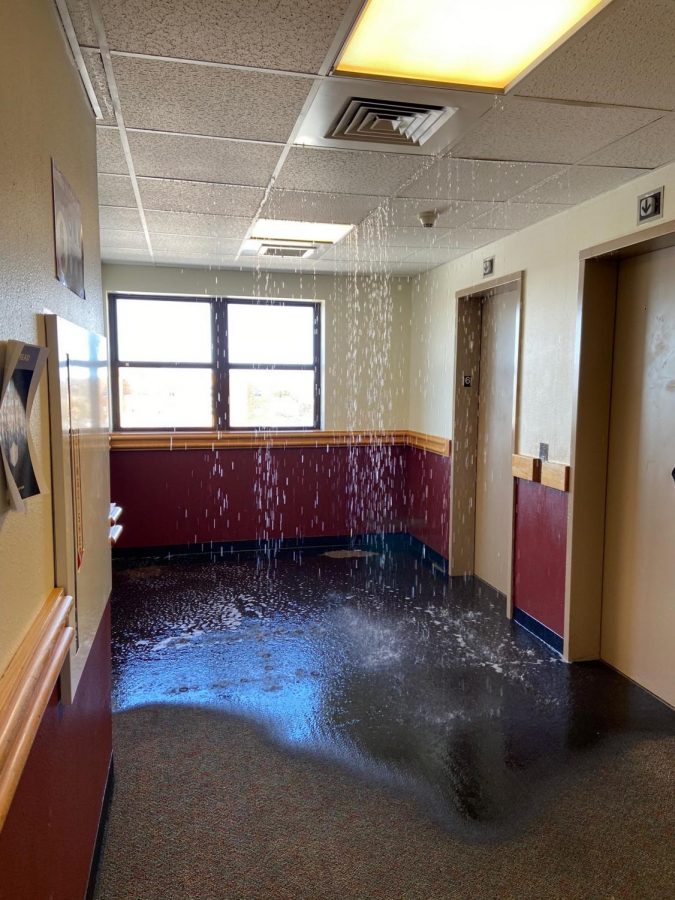 Flooding seen in the 6th floor of McCullough-Trigg Hall.

Sunwatcher Village apartments had a sprinkler system pipe burst on Wednesday, Feb. 17 that flooded water into nearby apartments.

“[The flooding] wasn’t in anybody’s apartment originally, because it was in these exterior closets. The way water works is it just flows down. The more it filled up the more it started going into the apartments,” Norma Ramirez, assistant director of residence life, said. “So luckily, we were able to catch it pretty quickly, but it still did quite a bit of damage.”

The sprinkler systems in the Sunwatcher Village apartments connect to exterior closets, and in one of them, a pipe was exposed to freezing temperatures. It burst, filled up the closet and seeped into the surrounding apartments.

“We had minimal damage on the third floor, but we had the most damage on the first floor because of gravity. Everything comes down that way,” Ramirez said.

So far there are three university locations where these water leaks have happened: Sunwatcher Village,  McCollough-Trigg Hall and the main housing office. Each were caught and cleaned up by housing staff and student workers.

“We did have a broken sprinkler line in Sunwatcher, so, we put a call-out to our staff to come out and assist with some initial water extraction before we could get an outside company to come in,” Kristi Schulte, residence life director, said. “As they were doing that, we actually had more students than we had jobs for, and not all of the students were RA’s.”

According to Ramirez, residents by the broken sprinkler line do not need to relocate, but it is offered to them if they choose. Other than this, she says impact on student life has been minimal.

“We never like to say that a leak is minor when it disrupts student services, because what we know is it doesn’t matter how minor or major it is in that student’s life. It’s a disruption.” Schulte said. “However, I will say that we’ve been fortunate in a sense that most of our water issues have either been maintained in our common areas in the wall versus large ruptures in the ceiling. In Trigg [there was] some water coming from the ceiling but those were contained very, very quickly and contained in common areas.”

Throughout all of this, the MSU campus has maintained power, heat and water consistently.

“We’ve been very, very fortunate. We know that the rest of the city has not been as fortunate,” Schulte said.

Ramirez said she is thankful for the MSU staff’s response.

“We’ve had a couple of different floods this week. Our staff has been amazing…. It’s been great,” Ramirez said.

Residence and housing staff are still working during these snow days to make sure students’ needs, such as safety and food, are accounted for.

“For instance, we have a living space that one of our police officers is staying in so that they can come to campus and take care of their coverage duties and responsibilities,” Schulte said. “We housed approximately ten dining staff members to make sure the dining halls could be operational.”

Schulte said she appreciates how flexible the students have been.

“I’ve been really proud of our residents because they understand that when we are living in community, you have to take care of one another,” Schulte said. “It makes you proud to be a Mustang.”

Residence staff will be on snow-watch until Monday when classes resume, and regular staff are able to come on campus.

“Once classes resume and campus opens back up, we’ll have other personnel on campus who are here in their fulltime roles to be able to take over and take the lead in those gaps that we’ve been filling. Our staff will kind of be in this role through Monday,” Schulte said.

Ultimately, Schulte hopes this response reminds MSU students that their university cares about them.

“I hope that what [students] see is that even when things don’t go as we would love for them to go, that there really are people out on campus who are concerned about students and the experience that they’re having,” Schulte said. “We want them to know that we’re going to take care of them.”

As for now, MSU staff are working hard to get the campus back to the way it was.

“We hope by Monday that we’ll be back to as normal as we can get,” Schulte said.