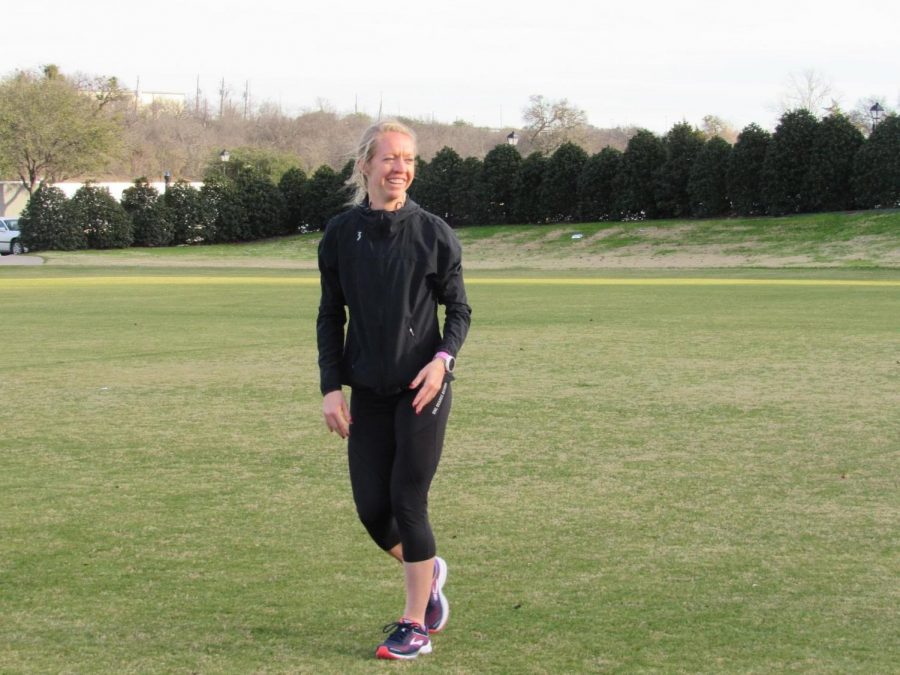 Kelsey Bruce at a practice for Dallas Baptist University.

The passion for running is in her blood. Her mom had the drive and determination to run competitively at the college level, and she wanted to follow in her mom’s footsteps. She always knew she wanted to teach and be a coach one day, but it wasn’t until she was obtaining a Bachelor’s degree and two Master’s degrees from Dallas Baptist University that she realized how drawn she was to the exciting challenges that occur at universities. After winning the All-American title four times at DBU, qualifying for the Olympic trials twice and finishing fourth in the NCAA DII Cross Country Championship, Kelsey Bruce became the assistant cross country and track coach at DBU for the next 4 years. A marathoner for team USA Track and Field, she has now taken on the role of MSU’s new head coach for women’s track and cross country. Coach Bruce is eager to start this new chapter in her career and has high hopes for her athletes this season.

Kyle Williams, director of athletics, said part of what made Bruce stand out as a candidate for the job was the calls he received from her peers that praised her high potential as a head coach and her ability to recruit talented athletes.

“The intent is to certainly build both track and field and cross country. I’d love to have more ladies join the team. The hope is to show us and to show our ladies what it’s going to take to win college championships. That’s why we’re in it, is to win. This is a really tough conference,” Williams said. “This is going to be an opportunity for her to put her stamp on her program, and we look forward to what she could do.”

With coaching in general, Bruce believes in the importance of building athletes up as people rather than just focusing on their performance.

“You want to get them to reach their full potential in all aspects, and so I think my philosophy is to coach the whole athlete. That’s definitely developed by experiences I’ve had with people in general and trying to build those up around you. That’s why I love coaching, just because you get to help people be their best self. I had a lot of people pour into me, and invest in me, and in my life, and I want to do that for others,” Bruce said.

As an athlete and now coach, knowing what it is like to be in her athletes’ shoes influences Bruce’s coaching style.

“Being a competitor really impacts what I expect out of athletes, and what I know that I can try to get them to achieve because I never thought I’d be at the Olympic trials. I’ve had people push me, and my current coach who’s formerly my boss and my coach in college, he had high expectations for me. We took one step at a time, and it just eventually materialized into something that was a lot bigger than was ever intended, and I don’t want the girls I coach to sell themselves short or to miss out on really great opportunities,” Bruce said. “I think being a competitor myself has made me competitive as a coach too.”

“I just felt like there were a lot of things calling me to be here, and I think this is an excellent opportunity in a community that seems really close. Being in Dallas, the whole community isn’t as invested in what the university is doing as they are in Wichita Falls,” Bruce said.

As Bruce and Williams talked during their interview, the fact that Bruce had always aspired to be a coach stuck with Williams.

“She’s relatively young. At the same time, I just think she’s got a tremendous future. She’s still training right now. She is in the top 25 marathoners in the country,” Williams said. “We’re anticipating some really good stuff, in what she represents, not only in track and field and in cross country, but for our student-athletes. We push the grades, and we push the graduation, above anything, as we have all along.”

The outdoor track schedule has not been posted as of Feb. 11, however, the Mustangs are hard at work preparing for their season.