‘Palm Springs’ explores the meaning of the perfect day 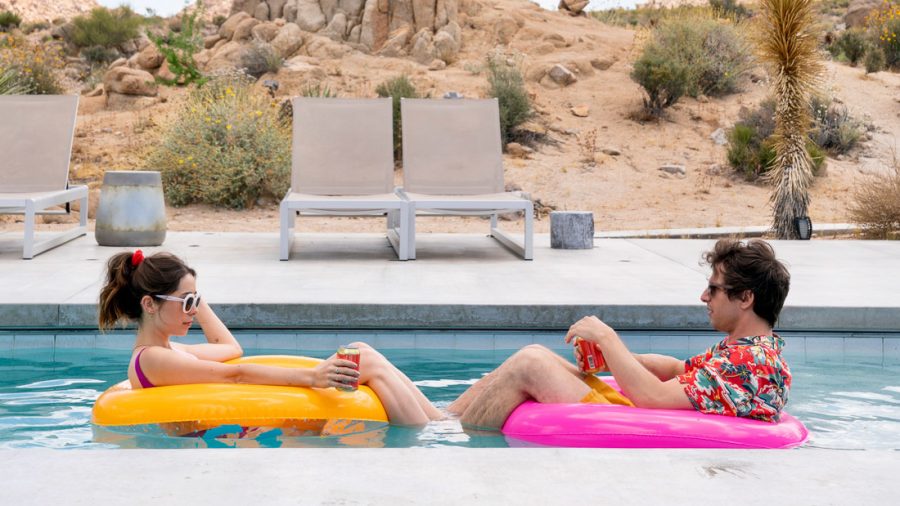 Andy Samberg and Cristin Milioti appear in "Palm Springs" by Max Barbakow, an official selection of the U.S. Dramatic Competition at the 2020 Sundance Film Festival. Courtesy of Sundance Institute

“It’s gonna be a great wedding!” That’s the first thing “Palm Springs” bridesmaid Sarah hears every morning when her eyes pop open. The unfortunate part is that she’s not going to weddings every day. It’s the same wedding day, every day, with no escape.

Sarah’s time loop predicament feels familiar, and it should. “Palm Springs” (produced by Andy Samberg and The Lonely Island) is hardly the first film to tackle the classic “Groundhog’s Day” plot-line of reliving the same day endlessly. There have been action-thriller, horror, and even more, rom-com takes on the idea, but this version feels like the freshest and funniest.

Sarah (played by the wide-eyed Cristin Milioti) isn’t alone in the wedding desert oasis though. She was originally dragged in by mistake by the party-animal goofball Nyles (Andy Samberg), a casual boyfriend to another bridesmaid, who appears to have been repeating the wedding day for years. The two become stuck in the time-loop for better or for worse, after Nyles accidentally leads Sarah to the “magic” cave that originally trapped him.

After the initial shock has worn off, Sarah and Nyles have to figure out what to do with an endless supply of sunny days. They try to become good people but quickly resort to acting out at the wedding and surrounding area or indulging in weeks of laziness by the pool. It doesn’t feel much different from the weird repetitive feeling of life in the early days of the COVID lockdown, but these two feel trapped nonetheless.

While Sarah and Nyles grapple with their “ no consequences” lifestyle, “Palm Springs” slowly starts heating up the romance. The two celebrate milestones in their “loop” and quickly learn to rely on each other as the only person that changes and grows with the passing days. It’s a sweet moment when the two realize that maybe being stuck together isn’t so awful after all.

The leads, Samberg and Milioti, have a strong, electric chemistry that is important for any rom-com but crucial for one as convoluted as this. They easily handle the many comedic moments of the film while still showing the slow and subtle character growth of their roles. There’s a clear buildup between the two friends to two lovers that this duo executes perfectly.

Unlike previous iterations of this time-loop genre, “Palm Springs” doesn’t wallow in philosophizing about living the perfect day or ultimately becoming a better person. Instead, the “eternity” spent in one day is framed as a way for these two strangers to come to know each other better than any other people possibly can. It’s a romantic story that’s disguised by the endless jokes and comedic moments that make the 90 minutes fly by.

“Palm Springs” is the balmy escape we need as the winter weather takes hold of Wichita Falls. It’s hilarious and sweet with a reassuring mixture of old and new that feels like summertime on screen. Get stuck in the time-loop with Nyles and Sarah on Hulu now.