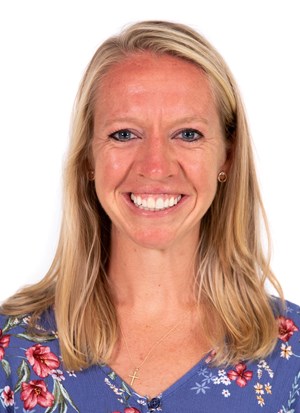 Bruce was a star performer when racing for DBU. Some of her accolades include becoming South Central region champion, earning All-American status four times, finishing fourth in the NCAA DII Cross Country Championships and representing team USA at the 2019 USA Track and Field World Championships in the marathon.

Bruce says MSU is a very good fit, likes the location and what the school and program stand for. Right off the bat Bruce knew she could show the team’s full potential.

“I really like the idea of being a head coach of a women’s program in Wichita Falls; the program has a lot of room for growth. The program has had a lot of success when I was in college and when they were my competitors. When I visited Wichita Falls and the campus, I liked the location; it was a very good fit for me.”

Bruce met the team Jan. 29 and has set the goal that she wants the environment to be one of growth and togetherness while still keeping the competitiveness in their workouts and racing.

“My goal is for them to grow together as a team and be unified, for people to see improvements from where they are right now and to take steps forward. I’m very excited; I’m going to give my best and hope they give me theirs. I expect them to be competitive and have competitive attitudes and marks,” Bruce said.

The athletes have expressed mutual excitement in being coached by Bruce and look forward to see where she can take the team.

“I am really looking forward to this season with Coach Bruce,” Hannah Ponder, track and field athlete and kinesiology senior, said. “We can already tell she genuinely cares about the entire team and will stop at nothing to help us succeed. I really think she is going to take our program to the next level.

Bruce’s experience as a celebrated runner herself and her instant chemistry with the team has made some players optimistic.

“I think she’s a great fit and just what we needed. She’s experienced our same situation regarding our coach and is also still a runner herself at a higher level, so I’m excited to see how this season goes. Everyone seemed to connect really well with her, and that is a huge start for all of us to come together as a team and build this program back up,” Gemma Gonzalez, track athlete and radiology tech senior, said.

Bruce’s training philosophy is grounded in consistency, teamwork and transparency.

“Some foundational points of my coaching philosophy, training wise, is to have consistency in training [and] consistently show up with a good attitude. Generally, the concept is the same: show up and do what is asked and be successful every day. Teamwork, all together will bring out the best. My coaching style is very straightforward, honest and transparent; athletes know what is expected from them,” Bruce said.

Aaryanna Williams, track and field athlete and Psychology sophomore is excited to work with Bruce and sees the drive she has being looking for in a coach.

“Dedication, determination, and reliability , is everything we’ve been looking for , blessed to finally say we have that,” Williams said.

When asked how the COVID-19 pandemic will affect Bruce and her coaching, Bruce said that it is something everyone is learning and evolving with constantly.

“I imagine that it will make the transition as a new coach easier, because we are trying to come out of not being able to compete or do anything. It provides a lot of growth and renewed motivation; I also know it was probably a challenging year this past year for everyone but challenges provide growth,” Bruce said.