Looking ahead to a busy Mustangs season 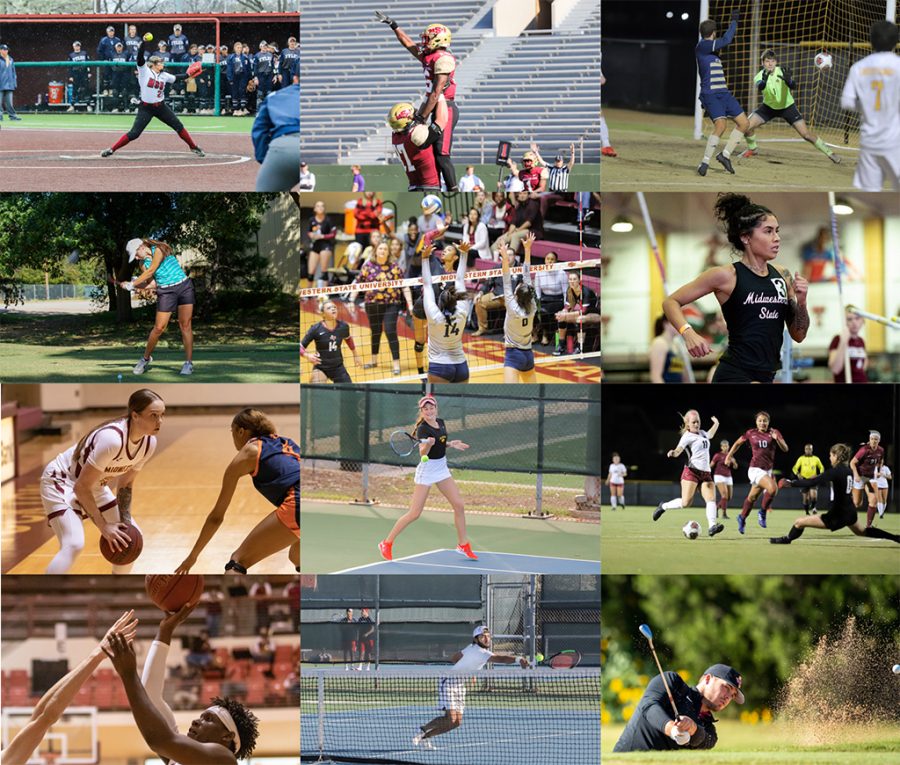 The men’s golf team finished the fall season ranked 15th in GolfStat’s rankings of NCAA Division II teams. The ‘Stangs finished top four in all four events, including a first place finish at the UT Tyler Invitational Oct. 26. While 104 days will have passed by the time the team golfs again, Jeff Ray, head golf coach, isn’t worried about losing any momentum.

“[I have] no concerns the break will hurt. Every year we have the same length break. Our players work hard over the break. Golf is a year around sport, and our guys understand this,” Ray said.

Among the standouts for the golf team have been Jake Doggett, management senior, and Garrett Leek, management junior. Leek is currently ranked as the second best golfer in NCAA Division II by GolfStat after scoring par-or-better in 10 of his 11 rounds. Doggett finished par-or-better in five of his eight rounds and is currently ranked 15th by GolfStat.

“Garrett and Jake are both great players, but more important they are great young men. They have golf, school, family, faith and friends and understand the importance of each,” Ray said.

Despite the success in the fall, Ray says the team has higher aspirations.

“Our expectations are very high. Yes I am proud of this team, but we can still get better. Our ultimate goal is playing for a National Title,” Ray said.

The men’s golf team’s first event of Spring 2021 is the Houston Classic in Humble, Tx Monday and Tuesday, Feb. 8 and 9.

“The women’s team is very young. I expect us to get better this semester. We need tournament experience and more work. The spring semester will be great for this team,” Ray said.

The women’s golf team begins its spring season with RJGA/WNMU’s “THE CACTUS THAW!”event in El Paso, Tx Sunday and Monday Feb. 14 and 15.

As of Jan. 15, the women’s basketball team is 4-2 and undefeated at home. The ‘Stangs have outscored and out rebounded their opponents on average this season thus far.

“We are playing extremely hard and together. Our defense has been very good at times, allowing us to outrebound our opponents. I would like to see us stay humble and hungry as the season is still young,” Christopher Reay, head women’s basketball coach, said.

Morgan Lenahan (No. 24), guard and Masters of Criminal Justice senior, currently leads the team in scoring with 13.3 points-per-game. Haevyn Risley (No. 15), guard and business finance junior, has lead the ‘Stangs on the boards, pulling in a team-high 7.2 rebounds a game.

“Everyone has grown over the offseason, our newcomers are gelling nicely and we are all working together,” Reay said. “[The goal is to] play as hard as they can in honor of Coach J, who passed last year and play every games as if it’s our last.”

The next chance to watch the women’s team play will be Friday, Jan. 22 at 3:30 p.m. at home against Texas Women’s University.

After winning eight games all of last season, the men’s basketball is just one win away from tying that win tally with a record of 7-1 as of Jan. 15.

“Our entire program has taken a big step forward this season on and off the court. Our team GPA in the Fall was 3.1 which is higher than it has been in a very long time. After 8 wins all of last year we are approaching that number already this year as we sit at 6-1. With our only loss so far being to a top 10 team in overtime I feel good about what the whole program has done,” Justin Leslie, head men’s basketball coach, said.

The start has been a joint effort with five players averaging double digit scoring. Two of the players leading the charge are Derrick Ogechi (No. 21), guard and undecided junior, who averages 14 points and 7.4 rebounds per game and Terrell Wilson (No. 10), guard and kinesiology sophomore, who averages 12.5 points, 4.3 assists and 2.1 steals per game.

“I would attribute our good start to two things. First we have a talented group of young men which is a good mix of returners and new recruits. The other is that the character of this group is high. They work hard on a daily basis and have been very intentional about building their chemistry on and off the court,” Leslie said.

A large reason for the team’s success has been its accurate three point shooting. The team as a whole is shooting just over 38% from beyond while making nearly 13 tripples per game.

“In order to hit our desired points per shot number we need to be at 38%. There is a level of offensive efficiency that we target each game, and use of the three point line is critical. Our goal is to be at the top of the Lone Star Conference, and to do that we must continue to shoot three’s and be efficient in doing so,” Leslie said.

The next chance to watch the men’s team play will be Friday, Jan. 22 at 5 p.m. in Dallas, Tx against Dallas Baptist University.

The men’s soccer team looks to replicate the success of the 2019 season when they reached the second round of the NCAA Division II tournament and won the Lone Star Conference Tournament. The team used the cancelled 2020 fall season as extra practice toward the 2021 season.

“Reflecting back on our Fall season, it certainly proved testing for us as a staff and most definitely on the players, but it’s how we come through the ups and downs as a group that will ultimately define us. I think Head coach Michael Meachum did an incredible job using the extra practice as a trial and error type of period as he implemented some new ideas within the group to prepare us for the year 2021. I would certainly like to think the ideas he has got across to the group will benefit us moving forward,” Patrick Fitzgerald, assistant men’s soccer coach, said.

“To be blunt about it, we expect every single player on our roster to make somewhat of a leap from year to year. Obviously, it goes without saying expectations aren’t always met, but the ultimate goal is to reach them,” Fitzgerald said.

Despite the team’s success last season, the expectations and goals are even higher this seasons according to Fitzgerald.

“Our expectations always remain the same, and Head Coach Michael Meachum is a constant reminder in terms of what he expects [and] demands from the players individually and collectively. We are never satisfied with a tie or a loss at this University. If we apply ourselves correctly I’ve no doubt we will be successful,” Fitzgerald said.

The men’s team will open the season at home Tuesday, Feb. 16 against Oklahoma Christian University.

Women’s soccer will look to improve upon a 2019 campaign that saw them post a record of 4-12-2, with many of those losses coming in close games.

Kelly Cannistra (No. 8), midfielder and radiology senior, returns for the ‘Stangs after leading them in goals with five in 2019. The team also returns most of their players from 2019, after graduating just three seniors last year.

Last spring the women’s tennis team recorded a record of 8-4, before the remainder of the games were canceled.

Casie Curry, exercise physiology junior, opened the 2020 season ranked No. 43 in singles, posted a 1-4 record at No. 1 and a 4-1 record on the number two line. Emilija Visic, exercise physiology sophomore, began her career by winning five-straight singles matches and compiled a 9-2 singles record.

Women’s tennis’ first game is at home against Collin College on Saturday, Feb. 06 at 12 p.m.

Last spring they recorded a remainder of 8-7 before the rest of the games were canceled.

Alexandre Crepy, general business sophomore, finished the season 8-6 in singles, going 4-2 at No. 3, 2-3 at No. 4, 1-1 at No. 5 and 1-0 at No. 6. Alberto Diaz, business management senior, compiled an 8-6 mark in singles play, won five of the first six singles matches to open the season and ended the season on a three-match winning streak.

Men’s tennis’ first game is at home against Collin College on Saturday, Feb. 6 at 12 p.m.

After not playing any games Fall 2020, the volleyball team looks to Spring 2021 to improve upon their 8-21 showing in 2019. Despite the .276% winning percentage, the team did manage to secure a playoff berth for the first time since 2016.

Raven Presley (No.21), right-side hitter and mechanical engineering senior, is set to return after her season ending injury 15 matches into the 2019 season. Before being sidelined, she recorded 95 kills and 7 blocks. Kaitlyn Masseth (No.8), setter and business management sophomore, also returns to the team after recording 446 assists and a team high 36 service aces.

The ‘Stangs begin their season Tuesday, Jan. 26 at 6 p.m. at home against UT Tyler.

The MSU Texas football team looks to bounce back from a 5-6 showing in 2019: the first time the Mustangs had finished below .500 since Head Coach Bill Maskill took over in 2002.

One of the glaring issues for MSU last season was its inconsistent quarterback play. After season starter Zach Purcell (No.10), quarterback and finance senior, went down with an injury four games into the season, three different players took snaps under center. The ‘Stangs will have more options in that position now with the return of Purcell and the transfer of Jackson State starter Derrick Ponder, quarterback and applied arts and sciences senior.

The Mustang’s first game of spring football will be in Portales, NM, Saturday, Feb. 27 at 1 p.m. against Eastern New Mexico University.

The softball team’s 2020 season was cut short after 22 games. The Mustangs had posted a 3-19 record up to that point with two of the three victories coming at home.

Ashley Turner (No.5), infielder and undecided junior, had the second most hits last season at 24. Right behind her in that category with 23 was Bailey Brenek (No.16), utility player and education sophomore, who also led the team with four home runs.

The cross country team performed well in the fall, finishing fifth in the Lone Star Conference Championship. Amerhyst Woolf, nursing senior, placed 8th at the event with a personal best time of 22:44.93, and she became the fifth Mustang in history to earn All-LSC honors three times.

The track team is currently in the process of finding a new coach, and the schedule will be posted in the future.