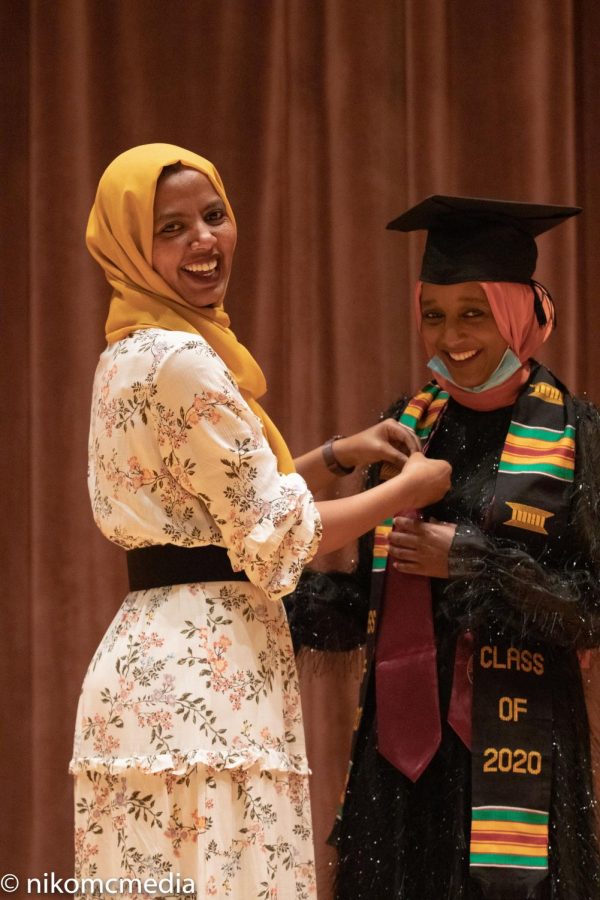 When MSU Texas hosts the official virtual Fall 2020 graduation commencement ceremony, it won’t be the only graduation to take place this semester. Different cultural organizations host their own graduations to celebrate the different types of students that make up the campus community. Among these special commencements is the Black Student Union’s Black Graduation, which took place on Nov. 15 at 12:30 p.m. in Akin Auditorium.

“The goal with Black Graduation was to create an educational initiative through the Black Student Union. We emphasized cultural awareness, making sure we can let the MSU community know about what it means to be Black. We also make sure we provide those educational initiatives for our members,” Jamilah Kangudja, a graduate student of educational leadership and president of the BSU, said.

Cultural graduations such as Black Graduation bring attention to some of the different groups of people who make MSU the community that it is.

“Yes, MSU’s regular commencement is important for everyone. It’s very important, but during this time we really wanted to make it personal. It takes a village. There’ an old African proverb that says it takes a village. Bringing that to life is the point of Black Graduation,” Kangudja said.

“It’s basically to let people know that ‘you are being seen in a place where you may feel like you’re not being seen. You are supported at a place where you may not feel supported.’ [They] did all this hardworking, and even looking at the statistics…it is imperative that people understand that what you’re doing is your breaking generational patterns. Many of these students are first-generation students. I believe, if I’m not mistaken, 10 out of the 12 students who did the commencement were first-generation students, and that’s something we emphasize. These people should have that opportunity,” Kangudja said.

The BSU’s most recent graduation was meant to be the third installment in the event’s history, but the rapid rise of the COVID-19 pandemic caused the Spring 2020 Black Graduation to be canceled.

“A year ago, December 19, was our inaugural graduation. This year, we were able to do it again, of course following the guidelines and protocols. It was supposed to happen last year, so the Spring 2020 semester, but COVID really threw the world for a loop,” Kangudja said.

While Kangudja hoped for a turnout of 20 people, she said she was happy with the 12 who did participate. The number of students was enough to warrant an in-person commencement, but not too many as to exceed the capacity limits of the auditorium.

“We had just enough graduates to do it in person. We had a goal in mind with how many graduates we wanted, but we also recognized that the capacity limits for the rooms to ensure that people were still following those different guidelines and protocols was necessary for people’s health and wellbeing,” Kangudja said.

In order to be able to host their graduation commencement in person, the BSU placed a limit on the number of guests graduates could invite. The building the graduation took place in had a maximum capacity of 64, and the organizers had to take into account the graduates, their guests, the speakers and the volunteers present.

To address safety concerns related to COVID-19, the option to participate virtually was made available. Kangudja believes that the fact that the official commencement was solely virtual lead to increased interest in participation in Black Graduation.

“With COVID, it was able to be in person, but the option to do it online was also available as well. We made sure to outline that even though we may reach capacity within the actual building, within the spaces of the walls, we were giving that option for people to be endowed with their stools by their significant persons at home, through a virtual call. But, we didn’t have anyone sign up during those specific dates to do it virtual. A lot of people did want to do the Black Graduation, especially after finding out that MSU’s commencement was going to be moved virtually,” Kangudja said.

The commencement speaker for Black Graduation was Charles Frasier, an MSU alumnus who graduated in 2017. He graduated with a bachelors in science and athletic training, was at one point the president of the National Association for the Advancement of Colored People on campus, was a senior class senator, peer counselor, won homecoming king and helped to create the Black Student Leadership Initiative that has made advancements for Black students at MSU. His variety of accomplishments and experiences led to him being chosen.

“[Frasier]’s done a lot of different things, and that’s always the goal when we choose a commencement speaker. We want people, the Black community, to recognize that there is life after MSU. It was hard while we were here, but you can be successful. Granted anywhere you go you’re going to have trials and tribulations, but here’s someone who can talk to you about those trials and tribulations, but who can also show you what success looks like and can show you what it means to be very hopeful,” Kangudja said.

Black Graduation was open to students of all identification, but Kangudja stressed that it was important not to undermine what the graduation meant. She also addressed complaints from students who objected to having a Black Graduation and not a white graduation, by saying if they cared about it enough they should organize the counter-event themselves.

“On the application, we ask you do you identify as Black; we give you an outline of what Black graduation means within this application. If you mark no that you don’t identify as a Black person, we’ll let you walk, we’ll let you get up there, but there’s always a chain reaction to things,” Kangudja said.

With many different types of people who identify as Black, there was a multitude of different cultures and personalities at Black Graduation. Many students who weren’t Black still helped set up the event.

“It was very cultural. There were people there who had different cultural upbringing, different religious beliefs, all of these different people. It’s intersectional. There’s all sorts of things that come with being Black, there’s not just one way. There were African people there, there were Black Americans, African-Americans, there were even Hispanics there. They weren’t in the graduation, but there were people who volunteered their services that weren’t in the African diaspora,” Kangudja said.

“By having a separate celebration, I feel we can give time for each student to give thanks as well as be featured and highlighted. With MSU graduation so big, [with] so many students, that it’s easy for one of our graduates to get lost. Having a smaller graduation allows us to bring focus and attention to that individual,” Ling said.