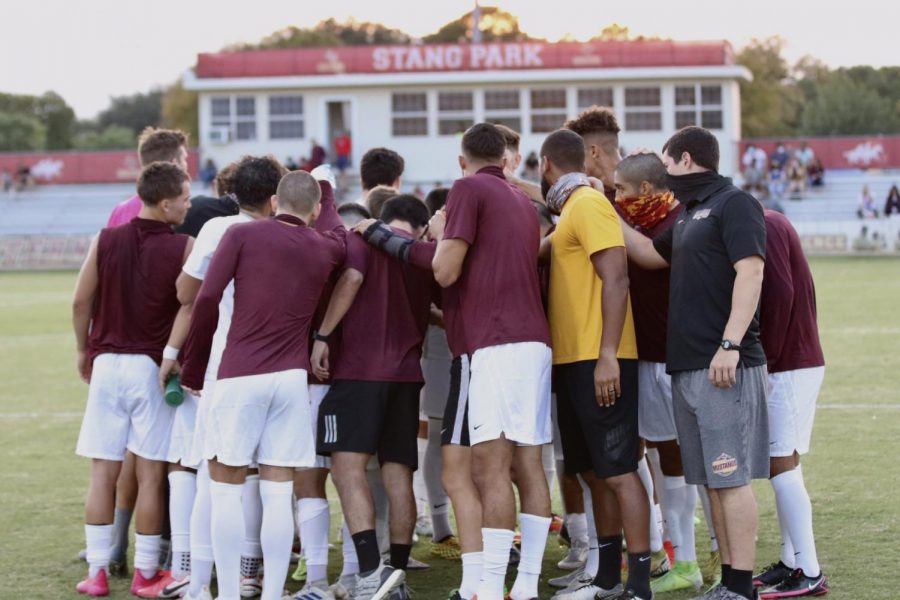 There was hope that the doubt-filled fall semester would still contain a sense of hope for collegiate sports fans and athletes. At first, fall sports were delayed until late September due to COVID-19, and then a month after the news, the LoneStar Conference put an end to all hope by canceling Fall 2020 sports for good. Among the teams who had their official games canceled was the men’s soccer team, fresh off a conference championship and Division II playoff berth the year before.

A lot of changes are in store for the 2021 LoneStar Conference soccer season. The men will dive headfirst into playing seven conference games. If qualified, the ‘Stangs will then move on to play in the conference tournament starting Apr. 3. Locations are to be announced at a later time.

Safe to say that this semester was an odd one. In fact, these past couple of months will go down in history. It’s hard to imagine what life would be like without soccer. For many of the players on the team, it was manageable, as they have years left of eligibility. For the upperclassmen, seniors, in particular, it was a difficult pill to swallow. While they’ll still have a season in the spring, things will be far from normal.

Carlos Flores, senior forward and kinesiology major, said that although the fall season was moved to spring, the team found ways to make light of the situation.

“Obviously it was very difficult for all of us since it is a very unique situation that no one had ever been in, but we all tried to stay positive and make the most out of every practice,” Flores said.

Scheduled scrimmages have definitely helped the team’s spirits during this time. The team had games against Irving FC, a team belonging to National Premier Soccer League, and conference foe Lubbock Christian University, which the Mustangs will battle against again on Mar. 16. in Lubbock, Texas.

Brandon Martinez-Trelles, redshirt junior midfielder and business administration major, said that playing in these scrimmages against other schools, as well as each other, is key in preparation for the spring season.

“Getting game fitness is different from practice. Games were key for us to get ready collectively as a team chemistry wise. It also shows the team who can play where and who’s ready with you,” Martinez-Trelles said.

This team is ready. Hope is coming back. The players are starting to push into their last gear as the season is near.

As of now, the spring soccer season is a go. The 10 seniors will look to guide the prestigious program to another successful campaign after finishing with a loss to California State-Los Angeles in the quarterfinals of the 2019 DII NCAA tournament last season.