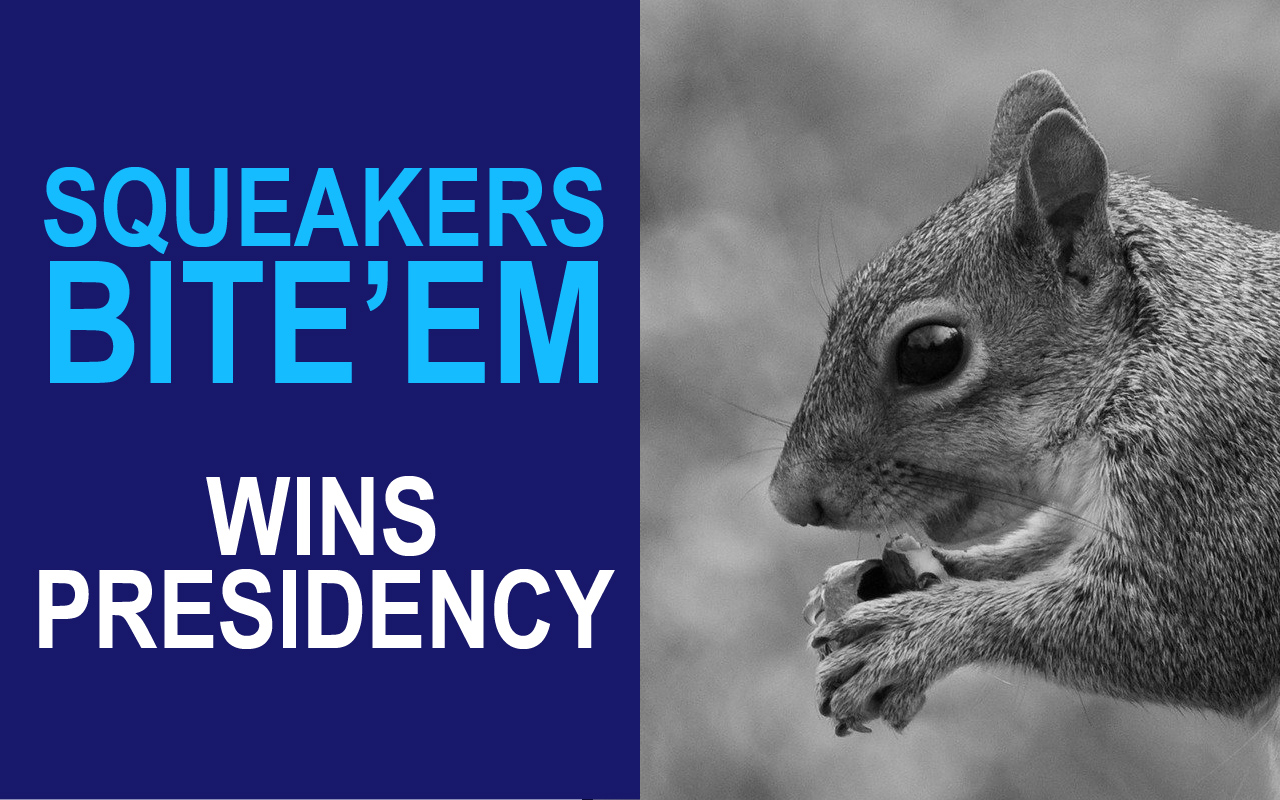 After nearly a week of counting, losing, and then recounting votes, longtime Squirrel Party member Squeakers Bite’em has been declared President of the Animals at MSU Texas. The announcement was broadcast on both the squirrel-leaning network Crazy-about Nuts News (C.N.N.) and the goose-leaning Fox News, which is run by actual foxes who live in the shrubs surrounding Sikes Lake.

In his first address since winning the presidency, Bite’em preached unity in a fauna community that has grown increasingly divisive, in part, due to the brashness and human-biting policies of the current animal administration.

“I truly believe that if we stand together, not as squirrels or geese, but as animals that we can overcome this pandemic and get back to stealing food from the humans however and whenever we want,” Bite’em said.

Bite’em beat out incumbent president Flippers Grump of the controversial Goose Party. Many political experts attribute Grump’s loss to his controversial comments on ducks, which lost him a large portion of the always-important fowl vote.

“What are ducks anyway? They’re just birds that weren’t good enough to be geese. Their necks? Way too short. Goosenecks are much, much longer,” Grump was overheard saying at a goose gala.

Most political experts apparently agree that most animals who voted for Bite’em did so, hoping they wouldn’t have to hear about politics for the next four years. We spoke with a young cricket stuck inside the doors at Fain Hall by the name of Jimini Long-legs, who agreed with this sentiment.

“With Grump as president, you could never get away from politics. Every day it was, ‘Hey look what Grump just posted on Honker [a popular animal social media site].’ I’m looking forward to forgetting completely about politics for the next four years,” Long-Legs said.

Despite no evidence of foul play, Grump has decided to sue every individual animal who voted against him on the basis of fraud. When we tried to coax a further explanation out of the incumbent president, he honked in our reporter’s face and bit their finger before running off. We had to reach out to Vice President Mark Finch, for a statement from the Goose Party on Grump’s accusation.

“Well, I think what Grump was trying to say was…I mean what he was going to get around to saying was…okay, fine, we have no idea what he’s blabbing’ about,” Finch said. “I guess counting votes is apparently undemocratic now.”

Amid the celebration of Bite’em’s victory, there was also sadness at the passing of William B. Gills, a candidate representing the Piscatory Party, who passed away after choking on a disposable mask. A large mass wake was thrown at the bottom of Sikes Lake. According to anonymous sources, some of the more violent members of the fish community are plotting their revenge on the two-legged beings on land.

“Humans don’t want to take global warming and littering seriously? That’s fine. We’ll see how they feel after getting their hands bit every time they reach into the lake,” an anonymous member of the Fish-Against-Humans activist group said.

Duck Anarchist Quack McFlippers, who was last seen eating the moderator at his debate weeks ago, is still on the run and may have fled to Oregon, in part to celebrate their recent legalization of hard drugs. The MSU animals hope that chaos, such as that caused by McFlippers, will lessen with the election of President-Elect Bite’em.

“Honestly, all I want is some peace and quiet for once. I just want to be able to go about my day, disrupting and inconveniencing as many humans I can, in peace,” Charlotte S. Webb, spider and concerned citizen, said.