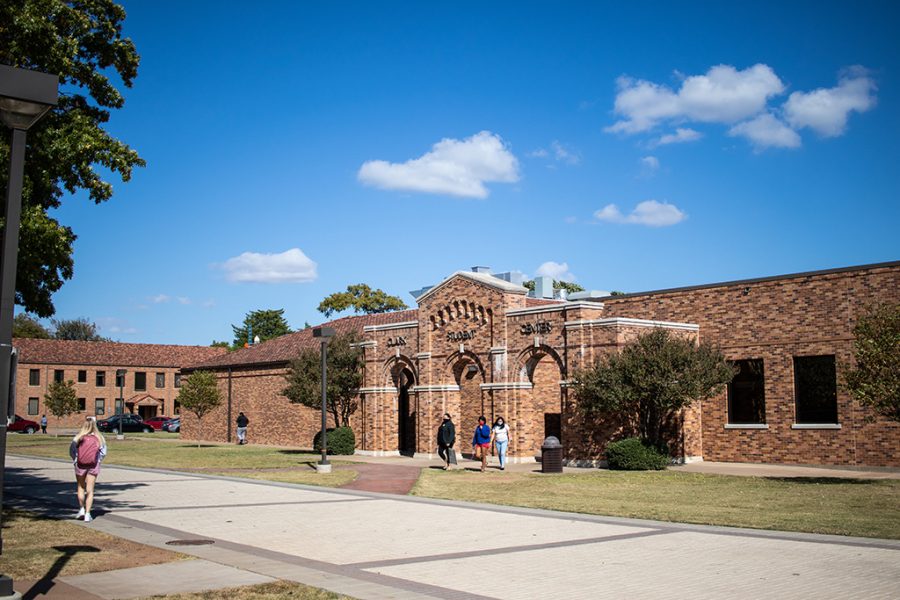 Students walking to and from buildings on a sunny day, Oct. 21.

Both Irlbeck and Serna-Martinez agreed that the political climate of Midwestern State leans closer to the left on the political spectrum as is the case with the majority of college campuses. However, Irlbeck said she feels there are more conservatives on campus than most people think.

“I would say that [MSU] is generally left-leaning… I would say there are a lot more conservative students than we know, just because they’re not vocal, and in some cases, they are afraid to be vocal, which is very unfortunate,” Irlbeck said.

Both Serna-Martinez and Irlbeck said they were not fond of the polarized partisan nature of the United States culture. Serna-Martinez, a gun owner who supports the second amendment, said that it’s important to listen to the “other side” who he claims has good ideas as well.

“Politics have become very polarized, especially in the last few years, and to me, it seems like it’s because of a lack of understanding and outreach from one side to the other. We are more comfortable within our groups, and that doesn’t facilitate the much-needed discourse between individuals of different ideologies,” Serna-Martinez said.

Irlbeck, a supporter of combatting climate change, said the two sides are working toward the same goal with different methods.

Irlbeck addressed MSU students, saying that she wished for them to not be influenced by other people when it comes to politics and to make their own decision for themselves.

“On behalf of myself and Young Conservatives, we just want people to stand up for what you believe in. Stand up strongly, don’t let people bully you into having a certain point of view or vote a certain way. Do your own research and make the decision for yourself, because whatever you vote, whatever policies you support, that’s gonna be your future and the future for your children,” Irlbeck said.

In his own statement to MSU students, Serna-Martinez encouraged all students to vote early and often, no matter how small the election might feel.

“Only thing I would say is vote often and vote early. That’s one thing we always harp on our members is try to early vote whenever possible and vote in every election even if it’s just the local elections, which a lot of people don’t feel that matter even though they can be pretty impactful on citizens,” Serna-Martinez said.

General business freshman Melinda Gonzalez is a strong advocate for voting and believes those who don’t vote are letting down the country.

“I think [voting] is super important. As an American, I think everyone has a right to be able to vote. I feel like if you aren’t taking advantage of your vote, you’re letting the people down that are voting and trying to make a change, and you’re not using your American right.”

When asked who he is voting for, radiology sophomore William Payne will cast his ballot for President Trump, because he is satisfied with the Commander in chief’s last four years in office.

“[I’m voting for] Trump because of what he’s done for the economy in the past four years. Unemployment rates are at their lowest and I believe other people are looking at the bad in Trump instead of what Biden could do for the country because in his 47 years in office he hasn’t done much,” Payne said.

Radiology tech freshman Destiny Walker is not happy with the choices for the 2020 election and is reserving her right to vote.

“This election I do not plan on voting. I don’t agree with our candidates and before I just up and vote just cause, I just won’t vote. I’ll skip this election,” Walker said.

Biology freshman Cristina Alvarado is voting for former Vice President Joe Biden as her morals do not align with President Trump’s.

“Biden. I will not vote for Trump; he definitely does not stand for any of my moral beliefs, any of my civil rights beliefs, and I just think that that’s more important than anything else,” Alvarado said.