With fall sports gone, cheer turns their attention to nationals 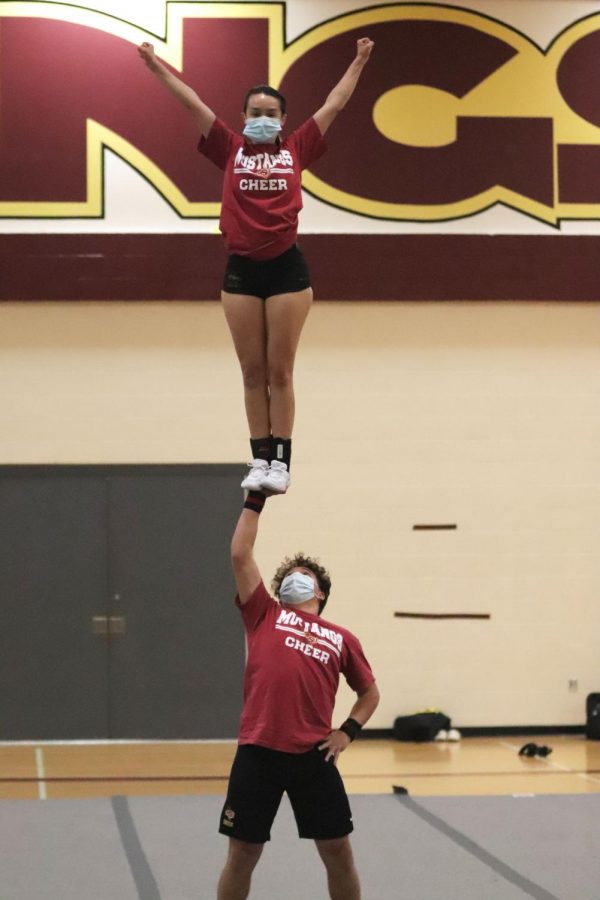 When the Lone Star Conference announced there would be no contact sports for Fall 2020 due to COVID-19, it wasn’t just those teams that were affected. The Midwestern State cheer team will miss an important aspect of their fall activities but will use this extra time to perfect their craft for the 2021 Universal Cheerleading Association & Universal Dance Association College Cheerleading and Dance Team National Championship.

“Fall sports games and MSU events play a huge role in the life of an MSU cheerleader. Although we are missing this portion of cheer, we have continued to promote and embrace the MSU spirit, push ourselves mentally and physically and prepare for Nationals,” DanLee Duncan, cheer co-captain and kinesiology junior, said.

“We have a lot of skill on this team, and we had a lot of returners, so we have a lot of people coming back who were actually on the Nationals team last year. We’re only able to build on top of that. A lot of the skill that we have at the moment, we had later on in the semester [last year], so we’re a lot further now than we were [at this time] last year,” Stokes said.

The loss of football, soccer, and other sporting events has opened up time to train on some of the more difficult cheer skills that are usually saved for later in the year.

“We do get a little bit of advantage with getting to focus on some of our harder skills as opposed to focusing on some of our game day activities,” Stokes said.

While the lack of fall sports has gifted the team with additional time for competition preparation, the lack of games has made the semester appear to pass by slower.

“Without fall sports, cheer has been slow. Normally, we’re busy every weekend either cheering or volunteering. But it’s also been beneficial, as we’re working on skills that we could not work on during the summer. As of now, we’re focusing on competing in the UCA Nationals competition,” Kassidy Knight, cheerleader and accounting junior, said.

Stokes agreed that being unable to participate in games, tailgates and other events bog down cheer athletes as it was a driving factor for many of them during the semester.

“Being down there [on the sidelines] with that spirit is such a big part of what we do, so I think it is a little bit of a bummer as far as we don’t get that experience that we do with the teams and also the comradery of the other students. There are tailgates that we’re missing and performances that we don’t get to do; I think that [those events] kind of drive them through the fall,” Stokes said.

COVID-19 has been an adjustment for all MSU students and the cheer team is no exception. Knight observing that she felt the adjustment has actually been more difficult in the cheer aspect of her life.

“My experience with COVID as a student has for the most part been the same. All of my classes are still in person while maintaining social distancing. Cheer on the other hand has been harder to adjust to. We’ve only had practice and weight training until last week [when] we were finally released to start stunting [while] socially distancing,” Knight said.

COVID-19 precautions take place before student-athletes enter practice and are maintained throughout.

“As of now we have to take temperatures, and [athletes] do the mobile check-in through the MSU app. That’s how they get into the door, and before we start practice they all go wash their hands, and when they come back in we have an ‘enter’ door and an ‘exit’ door. They have to have clean hands before they go touch the mats. Once we start… what we do is we have ten minutes of contact per stunt group, and then they take a ten-minute break,” Stokes said.

The cheer team typically hosts cheer tryouts and clinics in person but was forced to adapt due to the pandemic. This year aspiring cheerleaders sent in videos to be shown on a monitor to a panel of judges.

“It was more time consuming, and it was harder to judge just because there’s something that someone might have in a video one time that they don’t have when they come in person. We have to make it really clear that anything you submitted had to be a skill that you could show up having. Also, it’s really hard to know where they are as far as stunting goes. In in-person tryouts, they get to stunt with people that will be on the team with them. You don’t really know what stunt experience they have, because they don’t get to come do clinics like that and actually get experience stunting with the team. It was really different, [but] we still had judges come in person, and [we] had to do social distancing with them and display it all on a monitor system,” Stokes said.

Social distancing mandates and the lack of fall games have severely limited the interaction the cheer team has with other students, and any interaction has to occur on an individual level.

“Other than helping our students move in on move-in day, we haven’t been able to interact with students sadly, but we still do try our best to help our community and classmates the best we can individually while still being safe due to COVID-19,” Jordan Ingram, early childhood sophomore, said.