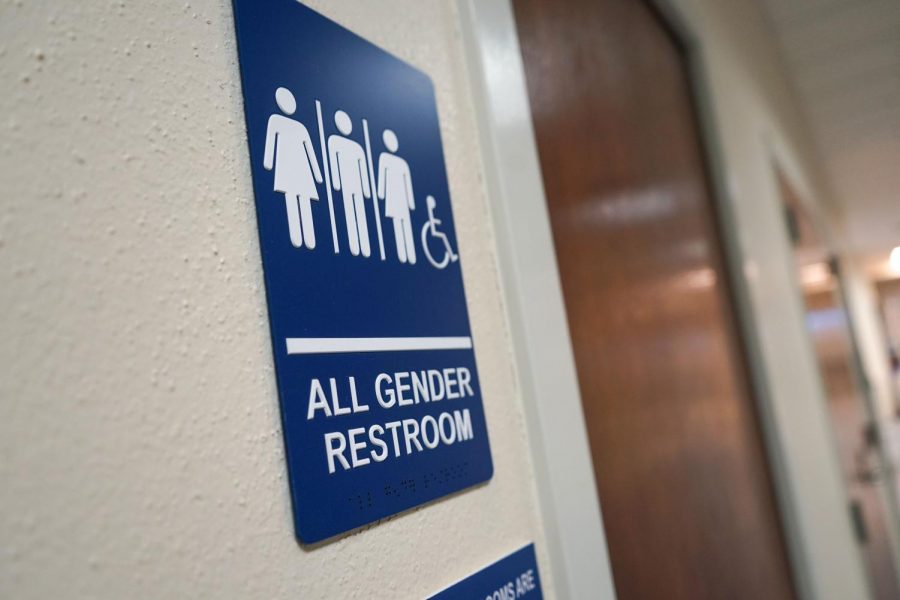 Two gender-neutral bathrooms have been placed in the Clark Student Center. The male and female bathrooms in front of the computer lab have now been relabeled as ‘all gender,’ which allows for any student of any identification to use it.

“We want to provide a supportive, inclusive, and healthy and safe space on this campus for our students and employees,” Matthew Park, associate vice president and dean of students, said. “When we think about all of the different identities that we possess and those positionalities, we have students on this campus that identify in a gender non-conforming manner and so for us to view the use of restroom facilities in a strictly binary sense is marginalizing.”

Park referred to the Clark Student Center as the heart of student life and because of this wants it to be an inclusive space for students.

“In my time as an advisor for PRIDE I have heard a lot of different stories as far as students feeling unwelcome in the community and on campus,” Jonathan Quam, assistant professor and advisor of PRIDE and The Wichitan, said. “This is the type of welcoming gesture that lets students know…that this is an environment that they can trust.”

Throughout the years MSU has been constantly renovating different areas on campus in efforts to create a more welcoming environment for students. This relabeling of the bathroom is one of those efforts.

“The Clark Student Center is an older building, there’s no remodeling or new construction that we would be able to build an all-gender restroom or a family restroom. That only leaves us with the option of effectively retrofitting or making use of space that already exists in a different way,” Park said. “In contrast when you look at the new construction projects…we have been able to include that gender-neutral or all-gender or family restroom within that design for example legacy hall in the common areas, the Moffett library renovation [and] the new centennial hall building. I think you’ll see that trend continue for the new capital projects but going into existing facilities is something that is difficult but we were able to find a way to make it work here in the student center and were happy to do that and so far it’s gone well.”

The gender-neutral bathrooms around campus are a way to be more inclusive.

“I absolutely love it! I do not identify as male or female; I am nonbinary. So the all-gender bathroom is super inclusive,” Harley Angelino, psychology sophomore, said. “I love it personally, it’s a much more comfortable space.”

These bathrooms have received a positive reaction from students that before didn’t feel comfortable going to a gender-specific bathroom. It is something that has been embraced by other students as well.

“I think it’s good [to have an all-gender bathroom] because I know for people that classify themselves differently that they feel comfortable going there,” Juanita Orozco, bilingual education sophomore, said. “I like how [the university] took them into consideration.”

To some students this is a big step, to others, it’s just a bathroom. Even though this change may not affect everyone, it is still relatively accepted.

The gender-neutral bathrooms have also raised concerns among students that don’t feel comfortable sharing a restroom with the opposite gender.

“Everybody has the right to what they wanna be but to me, different bathrooms were made for a reason like different parts should go in different parts. Nothing against anybody that believes in that, that’s not what I’m saying,” Jenna Johnson, pre-physical therapy freshman, said. “Personally I would only go to a bathroom of just females. I feel safer with just females in there.”

It is the fear that these all-gender bathrooms will be taken advantage of and be used for the wrong purpose that causes some to have concerns.

“[I would have] safety concerns mostly or privacy concerns really. Some people are still immature, so it might [turn into] a bet like, ‘Hey I bet you won’t go in the bathroom, if a girl’s in there you won’t look under the stall,’ or something like that,” Cierra Scott, marketing senior, said.

Park puts the concerns at ease as he points out another sign by the all-gender bathrooms. An idea proposed by students during a presentation for the Redwine Honors Program last fall.

“It’s a nice way for us to evolve as a campus and we have the benefit as well that is a large building and if there is an individual who is uncomfortable using an all-gender restroom facility we have the convenience of having the gender-specific facilities very close by,” Park said. “When we did the signage down there…you’ll see that there is an additional signage piece underneath it that has a specific instruction of where a person who would like to utilize the gender-specific facility where they could find that very close by.”

Outside of these concerns, the bathrooms have been well received since it is more inclusive to all students on campus.

“[The all-gender bathrooms] are a good important feature to have,” Diana Snuggs, nursing junior, said.

These gender-neutral bathrooms are a way to make students feel more welcomed on campus.

“This is a message and an exercise to show that we recognize the differences that exist within our students, within our employees and this is the way that we could help support, maybe it’s a small population but they are still an important population as members of the MSU community,” Park said.