The cancellation of football season leaves some athletes feeling lost 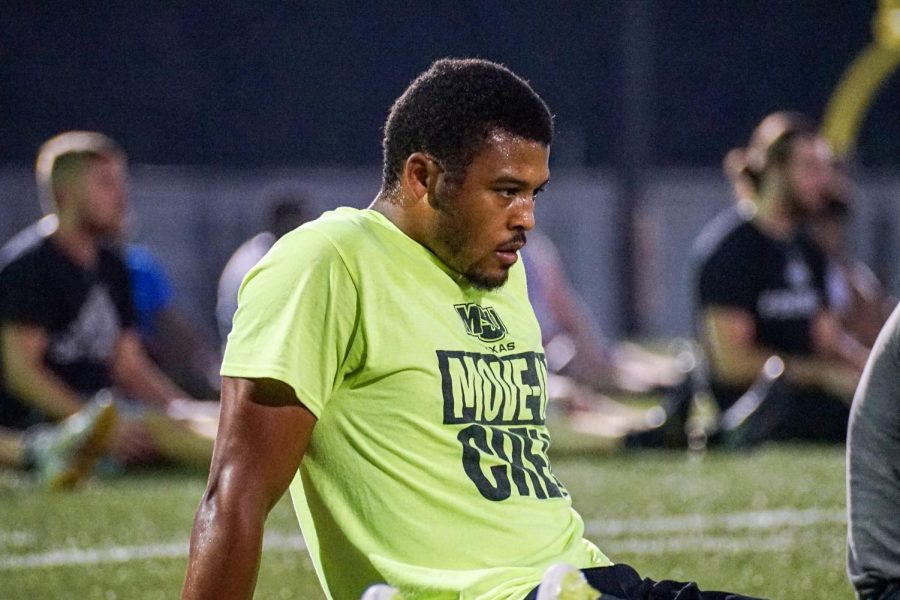 Business administration senior and defensive back Lance Hardman takes a moment to compose himself before another set of sprints. Sept. 15.

Packed stadiums filled with yelling, passionate fans covered head-to-toe in body paint and team apparel were once a treasured tradition for colleges across the nation. But, as the deadly virus continues to infiltrate day-to-day living, activities like football have come to a halt, at least for NCAA Division II teams. This disruption has completely changed the dynamic of college culture, leaving athletes like Anthony Tennison, sports and leisure senior, lost.

“I was devastated when I found out we couldn’t have a football season,” Tennison said. “I actually found out on social media that they had decided to cancel the football season for the whole Lone Star Conference. My first reaction was, ‘What am I going to do without a season?’”

On Aug. 7, the Lone Star Conference Council of Presidents announced that all high contact risk sports will be postponed until the spring. Despite the cancellation of LSC contact sports, professional and division I teams are still permitted to play, albeit with a limited fan base. Adding to the list of inconsistencies that have been a common theme of our recent times.

“I feel like it’s unfair that there are certain teams that can be able to play at this time and we cannot,” Tennison said. “But, I know that the people who made the decision to cancel our season really care about our safety first, and that’s what matters to me most. If I am not safe or healthy then I won’t be able to play football.”

Tennison describes life without competing with his team as challenging. Since he was five, Tennison has always been on a team, and he has never experienced life without football, it is his world.

“The pandemic has completely changed our lives,” Tennison said. “It has taken away some of the things that give me joy.”

Before the pandemic, the football team was a powerhouse that mentally and physically connected men with different backgrounds together to reach a common goal. With social distancing guidelines, the team tries to take advantage of downtime together.

“We try to take advantage of the adversity that’s presented itself,” Kylan Harrison, sports and leisure studies junior said. “Doing the little things as far as team bonding and things of that nature…”

Being a student-athlete is no easy job, but the pandemic has eliminated some of those tedious requirements leaving athletes to live a normal life some of them have never known.

“It feels weird being on the football team without having a season,” Tennison said. “In our first meeting ever, we all had to go to the Colosseum basketball gym and sit far apart. Our coach was on the basketball court talking to us while we were high in the stands all spaced out. We’ve had a few running workouts and positional meetings, but it’s not the same.”

To reduce contact, athletes are limited to a certain amount of weekly training causing some to become stagnant in their performance ability. Although Lazarus Fisher, kinesiology junior,  misses team workouts, he takes his skill seriously and dedicates time to enhance on every level.

“I try to run a little bit around my apartments to stay in decent shape,” Fisher said.  “The coaches have us running the majority of the time, but I like to try and stay ahead of the game.”

Alhough the football team has lost a season, it gives them time to perfect their craft.

“The cancellation has been somewhat heartbreaking for the people that love to play football, it’s kind of slowing everything down around you,” Fisher said. We just have to take this for the goods, thinking about it like that just gives us more time to work and prepare for whenever we do have a season. We have so much time that we should perfect our craft and become bigger and faster throughout this process.”

Losing this football season has also impacted the amount of exposure Tennison could have received from potential prospects.

“The cancellation of our season made a huge impact on my future plans because I had goals for this season that I can’t accomplish. But, on the other hand, I get to spend more time with my family and focus harder on my books,” Tenison said.