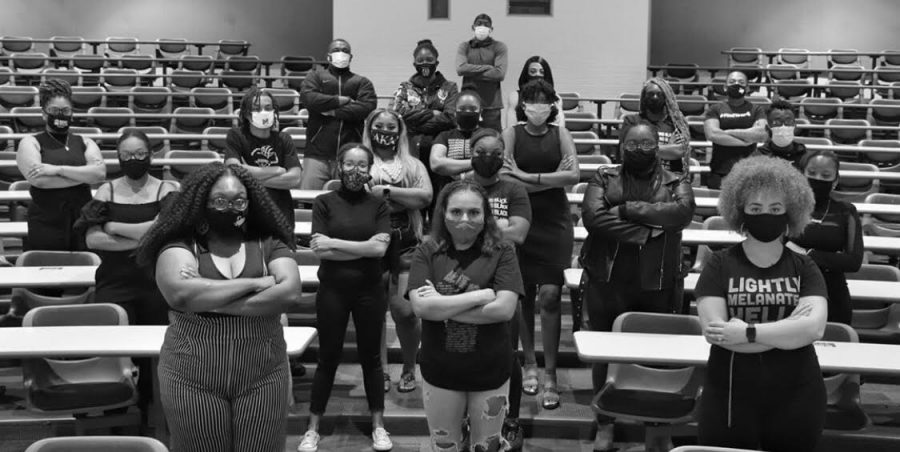 Members of various Black student organizations gather to take a photo together to show solidarity. Photo courtesy of Niko McWilliams.

To help create a sense of unity in students who are part of the Black campus community, members of the Black Student Union and other Black student organizations gathered together on Sept. 10 to take a blackout photograph, wearing all black attire.

Jamilah Kangudja, a graduate student of educational leadership and president of the Black Student Union, helped organize the event as part of MSU’s Welcome Black Week.

Kangudja said, “It was a collective effort. We thought of this event idea because of everything that has been going on in the world. We also just wanted to be able to exemplify Black excellence, Black empowerment, Black success, and Black support all in all.”

Kangudja said she thinks it is important for all the Black student organizations to connect with each other as allies.

“We have a lot to learn from each other. This is a good time for us to unify together, give people something to do, and teach people about the culture. There’s not just one way to be Black, so being able to get all organizations together that exemplify Blackness is great,” Kangudja said.

Brittany Roberts, sociology sophomore and member of the Black Student Union and National Association for the Advancement of Colored People, said she was proud to be a part of the picture.

“I’m here because I’m Black, and I’m proud,” Roberts said. “Regardless of what is going on in the world, I think everyone kind of needs community and what better way to do it than to be with people who are like-minded and like-melanated.”

Tyler Cadett, an engineering senior, is a member of the Black Student Union, Caribbean Student Organization, and Sigma Lambda Alpha.

Cadett said, “It’s not just Black Americans here. There are international students here that are Black as well. For me, I’m from the Caribbean, so it’s nice to meet other people who are like me.”

Beyonce Wilson, mass communication sophomore and member of the Black Student Union, essentially said the more the merrier when it comes to the fight against racism.

Wilson said, “It is strength in numbers, literally, so the more people the better, and the bigger effect that we can have.”

Wilson said she was glad to come to be a part of the picture to show her support.

“I wanted to support every one of color and also to show how our lives matter and how serious it is that we still need to make a difference,” Wilson said.

Cadett said the group blackout photo will be one for the books.

“I wanted to be a part of the school’s history. I wanted it to be documented that I was actually here as a Black individual,” Cadett said.

In her letter of organization, Shipley wrote,  “In the past days and weeks I have read and heard the heartfelt criticism of current and former Black students regarding their experiences on our campus. Their criticism outlines a path for the progress we need to make to become a racially inclusive community. Examples of racial injustice at MSU are not confined to a single program or policy, a single action or attitude. The examples indict many of us, from the president to the faculty member, from fellow students to staff. Because racial injustice permeates campus life, not only at MSU but across the United States, we have an unprecedented opportunity to bring our leadership skills to changing the present experience of our students and shaping a more just experience for our future students.”

July 15. As a member of the task force, Kangudja said she thinks it is an excellent effort to promote equality.

About the task force, Cadett said, “It could help. I feel like it could have a really positive impact on the campus community.”

Wilson said she appreciates the steps the university has taken to try to combat racism.

Roberts expressed both concern and a sense of optimism about the task force.

“I think that the diversity and inclusion committee could be good, but I also know that it’s really easy for things to take a turn for the worst. I’m hopeful that the people on the committee have the community’s best interest at heart and that they are listening to the community, listening to the students, and really taking in their opinions and their ideas before making any rash decisions. I think it could be good,” Roberts said.