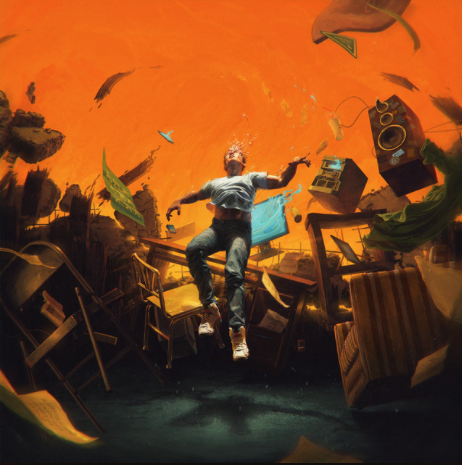 Gaithersburg, Maryland native, Sir Robert Bryson Hall II, better known by his rapper pseudonym, “Logic” released his sixth and final studio album titled No Pressure on July 24th 2020. I say it is his final because eight days before the album’s release, the rapper announced his abrupt retirement from rapping via Instagram, citing the birth of his son and explaining it was time for him to “be a great father”. This project comes after Logic’s fifth studio album Confessions of a Dangerous Mind which was released about a year and four months prior to No Pressure’s release date.

The albums name is an ode to another previous album of Logics’ titled Under Pressure, which skyrocketed the rapper’s fame to levels of success that other rappers could only ever dream to achieve. The album features no features as one would expect from a retirement album of a rapper of Logic’s caliber. It is also mentioned multiple times throughout the album that the rapper teamed up with “NO I.D” a famous song producer that help Logic in his early days to complete. It is even mentioned in the second song of the album, “Hit My Line” that the album was written in just one week in only four studio sessions between Logic and No I.D. If that is really the case, one listen to this album will show you why Logic is one of the greatest MC’s to share his lyrical and musical talent with the world of the last decade.

The album opens up with the classic intro that Logic is known for setting up the tone for the entire album and then opens up to “Hit My Line” where Logic sings about the hard times and what he is witnessing in the world and how despite it all he is going to live well. “Hit My Line” as well as much of the album has a very retro sound to it, a sound that over the years has become uniquely attached to Logic as his signature style.

Moving further into the album, the song “OpenMic\Aquarius III” is a heartfelt upbeat freestyle where Logic displays his lyrical prowess rapping about his upcoming and how despite his surroundings he was born into, he did not let it dictate the future he wanted.

The song “Perfect” which ironically may be the best song on the album is sure to be to the delight of veteran Logic fans as Logic returns to his signature rap style that first drew him attention as an artist.

Another great song, “Man I is” opens up to a melodious symphonic fanfare, which eventually leads to the first time you hear Logic rapping about how people have viewed him throughout the years and how no matter what he will always be proud of the “Man I is”.

The last song on the album, “Obediently Yours”, not only serves as the outro to the album but as an outro to Logic’s entire musical career. So to veteran fans of Logic it’s not a surprise that Logic sampled a August 11, 1946 episode of the Orson Welles Commentaries to bring attention to societal issues facing the USA today.

Logic has a long and storied musical career that spans nearly a decade and even has its own fanbase name (The Rattpack”) . Despite possibly being his last studio album ever, as he claims retirement to raise his son, this album still feels somewhat  lackluster and leaves you wanting more from the artist. But that’s the point of the album in its entirety… Logic doesn’t want some grand retirement celebration; he’s fine with walking away knowing that he did it his way from the beginning to the point that he now feels No Pressure. On my personal rating scale between 1 and 5 with five being the best, I give No Pressure a 4.5.