Being a light skin woman at a Black Lives Matter protest 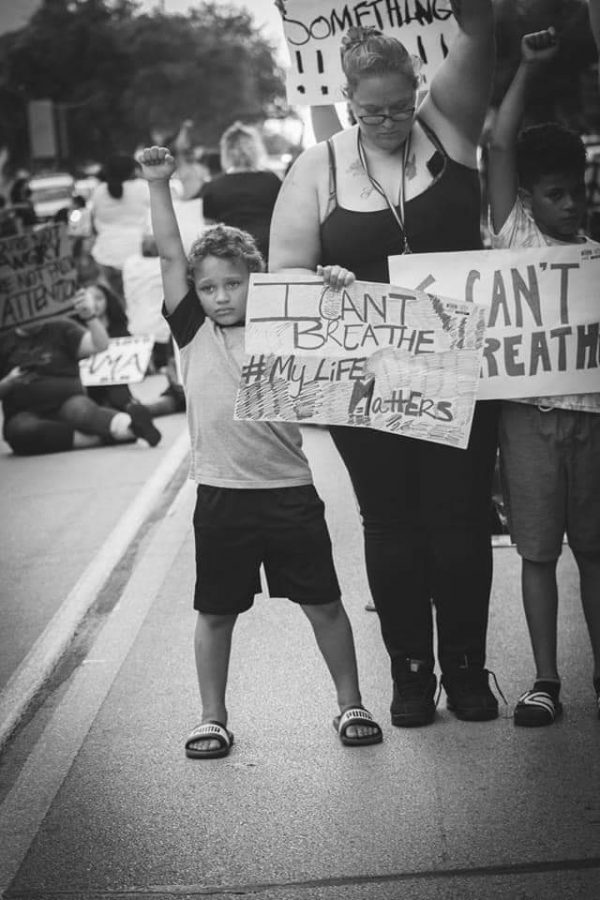 Jordan, 7, raises his fist in the air at the Wichita Falls #icantbreathe protest. June 1. Photo by Katie Bindel

“My non-black friends, I ask that you take a knee, if able.” One of the many people who chose to speak in front of hundreds of protesters asked a simple question that left me  lost in internal conflict. Should I stand because I am a product of a black and white couple, or should I kneel in fear of no one believing me if I stood? Because I do not look black, I feel locked out of a part of my cultural background. I went to the black lives matter protest in Wichita Falls, Texas because I wanted to stand up to police brutality and to support my fellow black men and women. But I felt alone, as I thought I had to choose between being black or non-black.

At the corner of 8th and Scott Street, the park was filled with people of different race, gender, age – all gathered in solidarity to protest injustice set against black people. My senses were affected as I saw this beautiful gathering and heard passionate stories from peaceful protesters of every background. Stories of fear and grief as mothers feared for their children and older black individuals preached for better days.

A white woman with two beautiful light skin nephews stood near me on the outskirts of the circle formed in the center of the park. The woman reminded me of my own mother who was a dedicated white woman who raised four children, two of them being biracial children. The woman and her nephews shared a sign quoting George Floyd’s “I can’t breathe” at the top and at the bottom were the words: “My life matters.” Whether the woman knew it or not, she was making a silent statement that I understood to be about all black people being outed by the police and society, regardless of what shade of black their skin was.

What I found unordinary yet extraordinary was how many white protesters presented their support. Their signs were more than “#BLM” and “Black Lives Matter” and acknowledged deeper problems. A young white woman held a white poster, simply labeled in black marker was “I will use my white privilege to be an ally.” This sign broke many boundaries because the white woman holding it was acknowledging her privilege and used it, not for herself, but for the black individuals who do not have that same opportunity. Looking at her poster, I had a realization: I shouldn’t have to worry about which racial identity to let take over, rather I should consider how I can use my privilege to ensure another innocent black person isn’t murdered by police officers.

After considering what the man preaching in the beginning said, I kneeled, not because I felt pressured to, but because the protest wasn’t about me, it wasn’t about the white people with signs or the individuals passing out food and water. We all gathered to protest peacefully against the fact that everyday, innocent black individuals have to face violence because of the color of their skin. I am proud to be black and am not ashamed to be a light skin and biracial. The day society acknowledges the fact that it is okay to have differences is the day we can finally live in harmony.