A day in the life: Kayla Khan and her battle with cancer 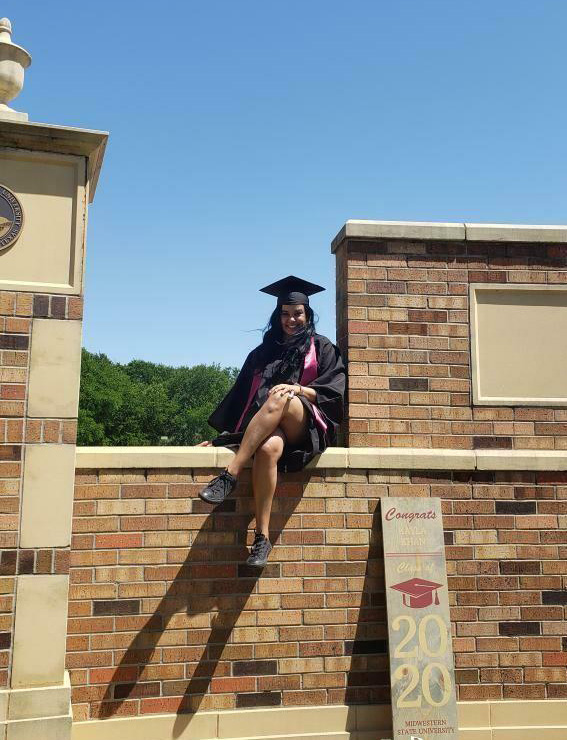 On Nov. 27, 2019 her life changed. She walked into UT Southwestern Dallas hopeful, and walked out uncertain of her destiny. A life that was once centered around freedom, invincibility and youth drastically transitioned into a life tied to constant doctor’s visits, fear and depression. Kayla Khan, psychology graduate, was only 21 when she was diagnosed with Thoracic Non-Hodgkin’s Lymphoma.

“I truly thought I was invincible before everything happened,” Khan said. “I had just got a job at the state hospital and was healthy.”

Khan was a young, happy and persistent woman who wanted to make an impact on society. She spent her youth focusing on her big dreams that could fill the entire world, but she was completely unaware that her journey would consist of battling against cancer.

“I started feeling pain in my chest,” said Khan. “My family begged me to go to the emergency room, but I was too scared to go. I went to bed that night thinking I wasn’t going to wake up, but when I did I went to the emergency room. They transferred me to United Regional and told me I had anxiety, heartburn and a heart condition. I got released early and then got the call about a tumor in my heart.”

Her entire world was shattered into pieces. Right after her diagnosis, out of fear Khan told her doctor that she wasn’t going to go through with treatment. She was afraid to lose her hair, but the doctor reminded her that without treatment the cancer would spread.

“I was severely depressed,” said Khan. “Some days it was kind of like living in a movie, when you know you’re sick or dying.”

In spite of being diagnosed with cancer, she had tunnel vision when it came to pursuing her goals and she never gave up on herself. Khan prevailed through six rounds of chemotherapy in the midst of taking six courses.

“Right after I had my tumor removed, I had to go in and take five finals,” said Khan. “I didn’t know what was ahead, but I’ve always loved a challenged. My whole family told me not to do it, but I knew that everyone has their own battles. So many students have various challenges and push through them, and I wanted to be one of them.”

Khan described every single day as a constant battle against her own strength and health.

“I honestly didn’t have much motivation now that I think about it,” said Khan. “Every day was a struggle for me. When it came to studying, I had to find different techniques, but my professors stepped in and made adjustments as needed for me. Chemotherapy negatively affected my memory, but the disability office helped me tremendously.”

Outside of battling against the side effects of cancer while juggling her course load, Khan said she experienced exclusion from her own peers.

“When I got diagnosed I assumed that a lot of people would judge me,” said Khan. “I got bullied a lot, but you can’t let the negatives outweigh the positives. You just have to try to be kind to yourself in this crazy world; no one makes it out alive, so make it count to the best of your ability.”

Despite being excluded from her peers, Khan said her family was always supportive of every decision she made.

“I wouldn’t have beat my cancer and graduated without [my family],” Khan said. “I was so quick to want to give up, but they pushed me. My grandmother passed away from cancer last year and my aunt currently has cancer. I figured it would be selfish of me to not try to fight it, however, I understand why people end up giving up.”

Throughout the constant support, Khan and her family struggled financially between paying for medical bills and her education.

“Financially it has been extremely difficult,” Khan said. “I had to quit my jobs, and my dad and sister have been paying for the majority of my bills.”

In the midst of her struggles, Khan still strives to focus on the positives. She focuses on the light at the end of the tunnel.

“It sounds cliché, but I truly try to wake up and go to bed grateful for at least one thing,” said Khan. “I’m big on New Year’s because so many people start the year with hopes and dreams, and don’t make it out. I’ve learned that cancer and life itself does not discriminate.”

Khan’s fight against cancer is not over; she still has to wait five years to be officially cancer free.

“I still have scars from the tumor removal and my port,” Khan said. “I’m technically not cancer free until five years pass, so I can’t have surgery to remove the port until then. Hopefully I make it to that point.”

Although she fears that the cancer will come back, Khan doesn’t let that stop her from living out her dreams and impacting those around her.

“I still have swollen lymph nodes all over my throat and armpits, so that worries me, but I’m trying to stay hopeful. I know I will always worry that I’ll find another lump,” Khan said.

Her fears won’t diminish her desires, and Khan still plans to start pursuing her master’s degree for clinical psychology.

“I want to help others who have had cancer or are experiencing it now. I was treated at UT Southwestern and Texas Oncology and all my doctors were so inspiring, and I’d love to do what they do,” said Khan.

This is only the beginning for Khan, and she said she will not let this part of her journey define her but only motivate her.

“I’d like to be cancer free, no more scans or surgeries,” said Khan. “I’d like to have my degrees and help people. One of my main concerns besides losing my hair was not being able to be a mom. I found out I’m still capable of being one so when the time is right I’d love to be a mom.”