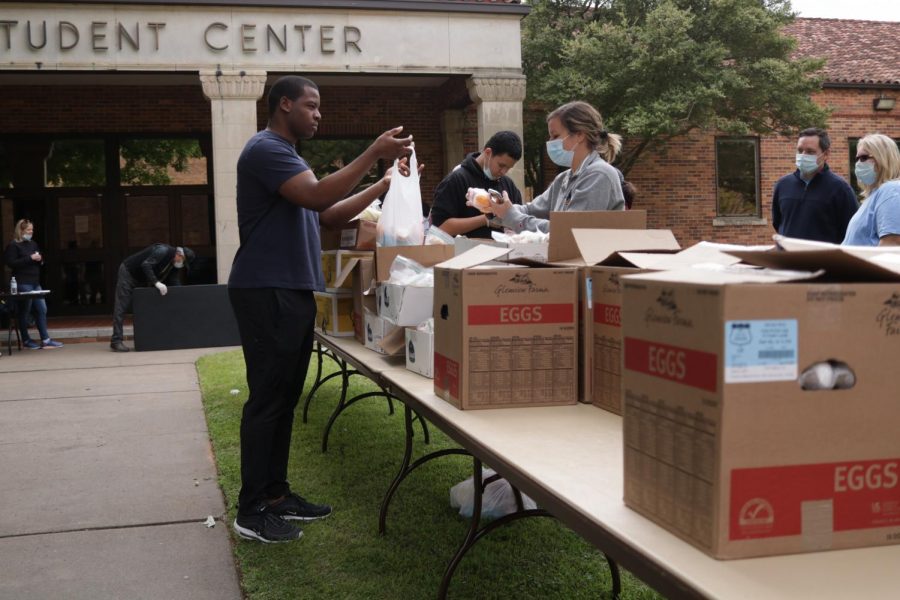 Volunteer filling a student’s grocery bag with a bag of shredded cheese. April 18.

To provide free breakfast items to students still on campus, the restaurant Pho Corner held a free grocery giveaway at the Clark Student Center on April 18.

“It was commendable [of them] to bring the breakfast items to students who were experiencing a need,” Syarra Tonge, accounting senior, said.

Pho Corner is a Vietnamese restaurant located at the corner of Midwestern Parkway and Wayne Avenue. The restaurant, which had yet to officially open, has been conducting a free grocery giveaway campaign to support persons in the community suffering from food shortages during the pandemic.

“We started doing these grocery giveaways at Pho Corner about four weeks ago,” Phillip Allen, co-owner of Pho Corner, said. “It started out as a one week deal but then people started donating.”

Although they are primarily focused on the elderly, the disabled and single parents, Allen said when he became aware of the students still on campus, he wanted to help.

Michael Mills, director of the Global Education Office, said, “[Pho Corner] contacted us last week after hearing about ourCommunity Link program where we were linking up members of the community with some of our international students who were here, to take care of some essential supplies. They contacted us wanting to know how they could help, and they wanted to donate some food to Midwestern students.”

In collaboration with the GEO as well as Mustangs Pantry, Pho Corner organized the giveaway. With the help of donors, they contributed roughly 300 bags of groceries. From 1 – 3 p.m., students came to the CSC to pick up a bag containing half a gallon of milk, 20 tortillas, shredded cheese, a pound of hash browns, a pound of bacon and 12 eggs.

“It was enough for a single college student to have breakfast for a week if you stretch the eggs and everything else,” said Allen.

Volunteers from the GEO, Mustangs Pantry and the student body assisted in the distribution of grocery bags.

“I needed to get out of the house and this seemed like a really good reason to,” Tishauna Perkins, clinical lab science junior and volunteer, said.

There are still 126 students residing on campus, not including those staying in the various off-campus apartment complexes. The majority are international students who cannot return home due to closed borders.

“Last I checked, they [the government] were going to reevaluate in May whether or not they will open their borders,” biology junior Cheslin Malloney, who is from St. Kitts and Nevis, said. “It’s good to see that people within the community are concerned about not only international students but students who are stuck here because of the pandemic. I just want to say ‘Kudos’ to the Pho Corner and thank you very much.”

To this date, Pho Corner has handed out approximately 2400 bags of free groceries, valued at $17,000, to persons in the community.