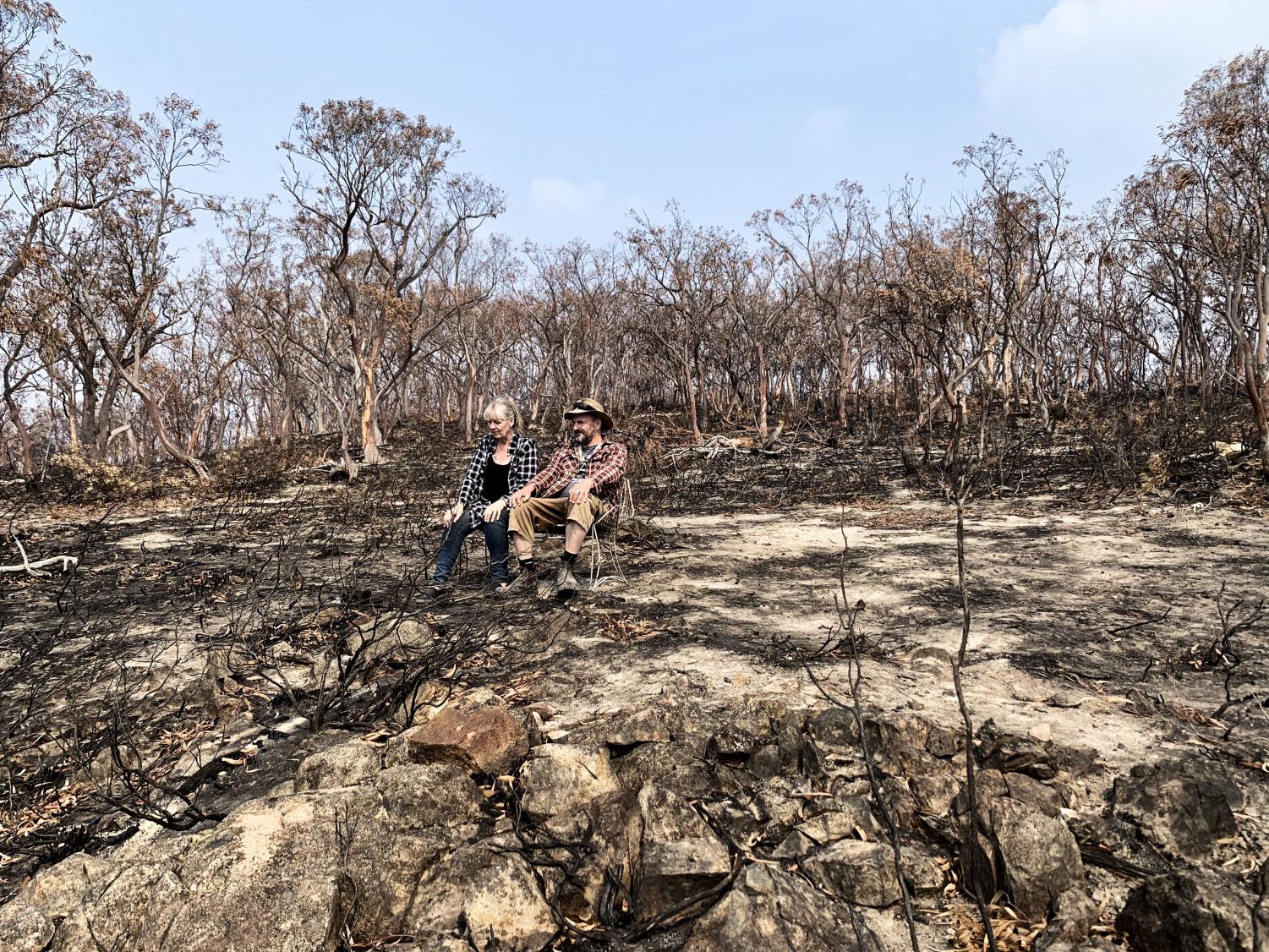 Ange hunter and Jake Annetts sit on a surviving metal bench in what was once a dense tree-filled area of their property. Jan 12. (Bridget Reilly)

Ange hunter and Jake Annetts sit on a surviving metal bench in what was once a dense tree-filled area of their property. Jan 12.

Australia’s historic town of Braidwood and the land of Yuin Country, located just over an hour from the Australian Capital Territory, was surrounded by a bushfire in late Nov. 2019. As the fire closed in around the community, residents were told they couldn’t leave and they needed to take shelter and activate their bushfire survival plan. While the town of Braidwood was left standing, a number of surrounding communities were reduced to ashes.

Among the ashes was a self-sustainable property, Dog Leg Farm, run by Angela Hunter and Jake Annetts, 13 kilometers west of Braidwood. The 27-acre property was built from the ground up four years ago. Using natural sequence farming and permaculture techniques, Hunter and Annetts turned their land into a flourishing wildlife sanctuary for native Australian animals and plants. Before the bushfire, the couple was planning a project to grow enough organic food to freely share with people who need it because they “don’t think people who are struggling should have to go without really good healthy food.” Despite the loss, this power-couple has been making the best of the situation.

“There does come a point, I think, where there’s only so much you can grieve,” Annetts said. “It’s not like we can change what happened. So we’re just getting on and trying to make the best of the situation. A lot of people have said to us they can’t believe how positive we are being, but we’re just being. We’re not really thinking about how we’re being; we’re just getting on.”

Built just two years ago by the pair, their home was made from all recycled materials.

“Our house was just a hand-built cabin. Everything we got was from the tip. The floorboards were from a friend of mine who was redoing his business and the windows came from Revolve (reuse and recycling facility),” Hunter said.

In the days leading up to the devastation, the couple enacted their fire survival plan and evacuated to their daughter’s home in Braidwood, coming back whenever they could to check on their property. Despite the fire danger, Annetts checked on his neighbor, Chris, to see how he was.

“I just hated the thought of him being left to fight the fires on his own, so I went to check that he was ok and he was quite confident,” Annetts said. “He had his radio, he had a plan, three IBCs (intermediate bulk containers) on the back of a truck, a pump and all that stuff.”

It wasn’t until Annetts was standing on a different neighbor’s roof, Andrew, with embers falling around them that he realized Dog Leg Farm was also in imminent danger.

“I’ve never seen anything like it — it felt like we were about to be hit by a giant. You could hear it in the distance. It sounded like a distant aircraft firing up,” Annetts said.

That night, Hunter and Annetts sat in anticipation listening to the RFS radio when they heard a firefighter mention a fire had broken out on their road.

“We got a call from Chris somewhere between 11:30 p.m. and midnight saying the fire has gone through our place,” Hunter said. “He didn’t know if the house was there or not because it was dark and smoky so we had to wait until the next morning just thinking, ‘Oh god, what are we going to face?’”

Hunter and Annetts came up at first light the next morning to see what was left standing of their property.

“We drove up the driveway and I could see the shed and I was like, ‘Yes! The shed is ok! Maybe everything is alright,'” Hunter said. “Then we drove around and went ‘Oh god, no,’ and saw the destruction and just burst into tears. It was horrible. It was really heartbreaking.”

After an hour of walking around assessing the damage, Hunter said their main feeling was relief.

“It was almost like a sense of relief because we didn’t have to wait anymore. We had spent a whole week waiting to see if it was going to come,” she said. “So, we thought, ‘Oh well it’s done now, at least we can sleep.’ We actually slept really well that night, because we had been so tired.”

Despite their four years of hard labor lying in ruins, the couple picked themselves up, dusted themselves off and got to work.

“It was just a full time go after that,” Hunter said. “We got back up here and thought, ‘Well what do we do now? Where do we start?'”

The Braidwood community didn’t waste a second. A GoFundMe campaign was set up by friends, and offers of food, clothing, and furniture came flying in.

“Everybody was like, ‘We can come help you. We can come clean up,'” Hunter said. “Suddenly everyone came out of the woodwork, [and] the whole town was running around for us. It was amazing, absolutely amazing.”

Similar to many other bushfire victims, Hunter and Annetts were only able to grab a few personal belongings before the fire hit.

“We were able to get five or six guitars, the ones that we use generally, the precious ones,” Hunter said. “[We also retrieved] my camera and important paperwork. We were kind of a bit complacent, thinking, ‘Oh, it’ll be fine.’”

Some of the items the couple lost included: two banjos, a dulcimer, violins, a mandolin, a bass guitar and artwork that friends had made for them over the years.

“Just personal little things,” Annetts said. “We’re going to sift through the rubble and see if we can find little tiny things. I left a ring beside the bed that I like. It may have melted. Most of the soft metals melted, so it’d probably be just a blob.”

After burning through their property, the North Black Range fire moved onto other surrounding properties. The danger remained despite the fire spreading onward, and the scene was apocalyptic.

“For days, we still had fire crews coming through because trees would suddenly go up [in flames],” Hunter said. “We had all this mulch lying around, which had big pieces of wood in it and [the fire] would slowly work its way through, then hit a piece of wood and go up again and take out a tree.”

Between building a new place to sleep and filling out paperwork, there has been little time for the couple to process what has happened to them.

“I do sometimes have a bit of a teary moment when I’m on my own in the car and a tune comes on that sets me off,” Annetts said. “I have not fully let go yet.”

“New Year’s Day, I came up here by myself because I hadn’t been here alone, and the place had always been crowded so I just wanted to come sit and take it all in,” Hunter said. “I thought, ‘I’m gonna have a sit and a bit of a cry and a bit of a release.’  There were flies everywhere, and it was smoky, and it was hot, and there was all this ash, and I just felt like I [couldn’t sit and cry]. We’re still in it, in the middle of it, so we can’t even process it yet. We’ve just been go, go, go the whole time since it happened.”

Like many Australians, they have been disappointed in the government’s response to the bushfire crisis.

“I’m gobsmacked at the lack of interest in it to start with,” Hunter said. “You know, when it was coming, everybody was like the place is on fire, the place is on fire, and [Prime Minister Scott Morrison] was all, ‘No, it’s fine, it’s fine.’ Then he went on holiday and [David Elliott, Emergency Services Minister] went on holiday. They literally ignored it, until suddenly people died and then it was important.”

In 2007, Professor Ross Garnaut led a climate change review, which looked at the impacts of climate change on Australia. The report stated that without sufficient action, the Australian fire season would intensify by 2020. The 2019/2020 bushfire season has surpassed Australian records, burning 17.1 million hectares of Australia’s landscape with three months still left of the season. According to ecologists at the University of Sydney, approximately 500 million native wildlife have been affected, with millions feared dead. The death toll has risen to 28 people (including 5 firefighters), and more than 2,700 houses have been destroyed with 120+ fires still active. Hunter and Annetts are mystified as to why the government hadn’t taken action sooner.

“They knew about this. They knew it was coming. They still pulled funding. They still didn’t give us what we needed. At the start of the fires, there were other countries [offering help]. I think the U.S. was offering us fire bombers, but he was going, ‘Nope, we got this. We don’t need it, we don’t need it,’ and then did nothing. The fire that came through here, that was over on the Tallaganda forest, if that had been firebombed when it first started, it would have stopped all of it from hitting us.”

There are hundreds of organizations and charities across the country that offer help to victims of the bushfires get back on their feet. However, knowing about and finding aid relief has been a difficult task.

“People have been sending us links, saying, ‘Do you know you can get a grant from the Red Cross?’ and we’re like, ‘No, we knew nothing about this!’ Why haven’t they got a government representative in town going, ‘Come to us, here are all the grants you can get, here are all the forms that you need.’ There’s nobody.”

Hunter and Annetts have been able to see the positives in their dark times, noting that people are starting to realize that it’s the community that holds everything together.

“We always used to say that if Braidwood was cut off from the rest of the world, we’d survive, and we have,” Hunter said. “We’ve had our roads cut off completely, but here we all are holding each other up and supporting each other — it’s amazing.”

With the help of Jarrah Kidd, friend of the couple, they are working on re-configuring their shed so they have a place to sleep. Although Kidd needed the work, he offered to help for free. With the funds raised from the GoFundMe campaign and the intention of “putting money back into the community”, they have used some of the money to reward Kidd for his hard work. BlazeAid has also come to their side by helping mend and rebuild the damaged fences and chicken coop.

To help with creating new gardens and the construction of another hand-built home, visit their GoFundMe page:  https://au.gofundme.com/f/dog-leg-farm