Administration offers follow-up statements regarding the fascist on campus 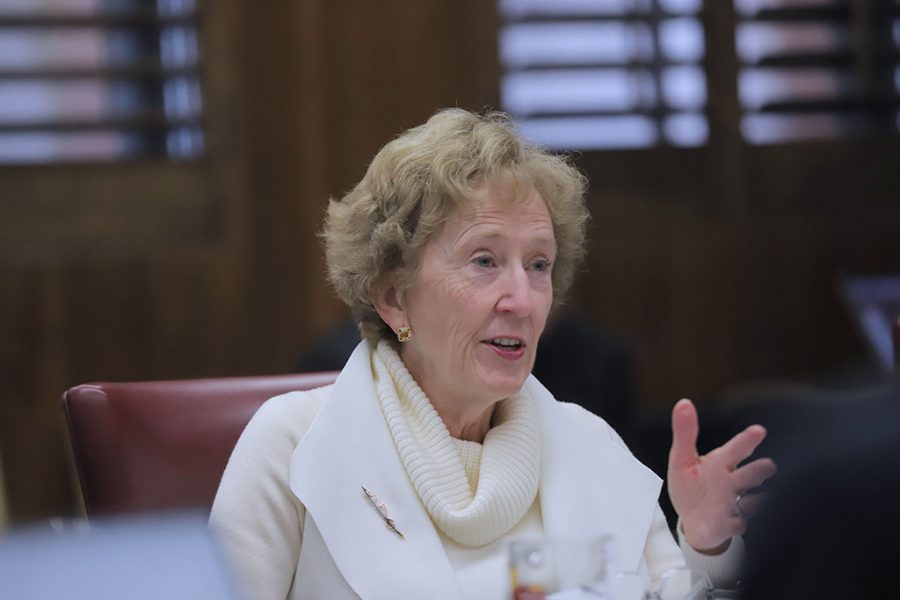 President Suzanne Shipley talks about keeping the change to professors mandatory office hours from 10hrs to 5hrs per week at the Board of Regents meeting. Nov. 7. Photo by Bridget Reilly

In the wake of an ill-received statement addressing tweets that identified a fascist sympathizer on campus, the MSU Texas administration has collaborated with student leaders to issue another statement that’s “more transparent, and less formulaic.”

“By Friday, we were aware that [the tweets] had been made more public than we initially thought,” President Suzanne Shipley said. “At that time, I asked Dr. [Keith] Lamb to reach out to the student leaders of organizations that may be most affected for an immediate meeting.”

Shipley said she invited leaders from:

“I wanted to have this meeting not only to address this issue, but overall campus climate,” Shipley said. “One of the key takeaways for me was the students’ want for administration to be more transparent, and less formulaic, in our responses to issues like these. The students were very understanding of why we, as a public university, often have to be so formulaic, but when it comes to potential threats to the students, we take it very seriously.”

Shipley said the administration assessed the threat potential of the initial posts using behavior and vocabulary analysts from the university’s behavioral intervention team, as well as an independent threat-assessment entity. She said the results of the assessments concluded that the posts did not qualify an immediate physical threat to student safety.

“We approach it very scientifically,” Shipley said. “And when something like this doesn’t meet the criteria of an immediate threat to campus, the university has to treat it as  protected by the First Amendment, even if it’s contrary to our values as a campus.”

SGA President Kerdell Cuffy was one of the first student-leaders to be made aware of the tweets on Nov. 15, and she said the meeting was a step in the right direction for both the administration and students.

“Understandably, there’s a lot of regulations as to how these things are communicated by the university,” Cuffy said. “We discussed [administration] being more direct moving forward, and I believe they are doing what they can to accommodate, but a lot of it comes down to the students. We cannot live in a reality of fear. The university assessed him for threats and found none. An open dialogue is one of our greatest tools, and I believe that’s what Dr. Shipley is trying to do.”

P.R.I.D.E President Michael Maiato, who was one of the first students to bring the tweets to the attention of the university administration, also attended the meeting. Maiato said they appreciate Shipley’s willingness to meet and further address the topic publicly, but also believe the university can only do so much in the way of addressing the heart of the issue.

“It’s really in the hands of the students,” Maiato said. “The university can only do so much because they are a public institution. It’s on the students to make noise about things like this, and make it clear that it’s not ok. It’s not the first time we’ve seen this kind of sentiment from people on campus, and it won’t be the last, but it’s good to know that administration is taking steps to help in the ways that they can.”

Find the most recent statement here:

To the MSU Texas Community:

The Wichitan staff contacted Tyler Glasscock, geoscience graduate student, and did not receive a response. His employer was also contacted with no response.