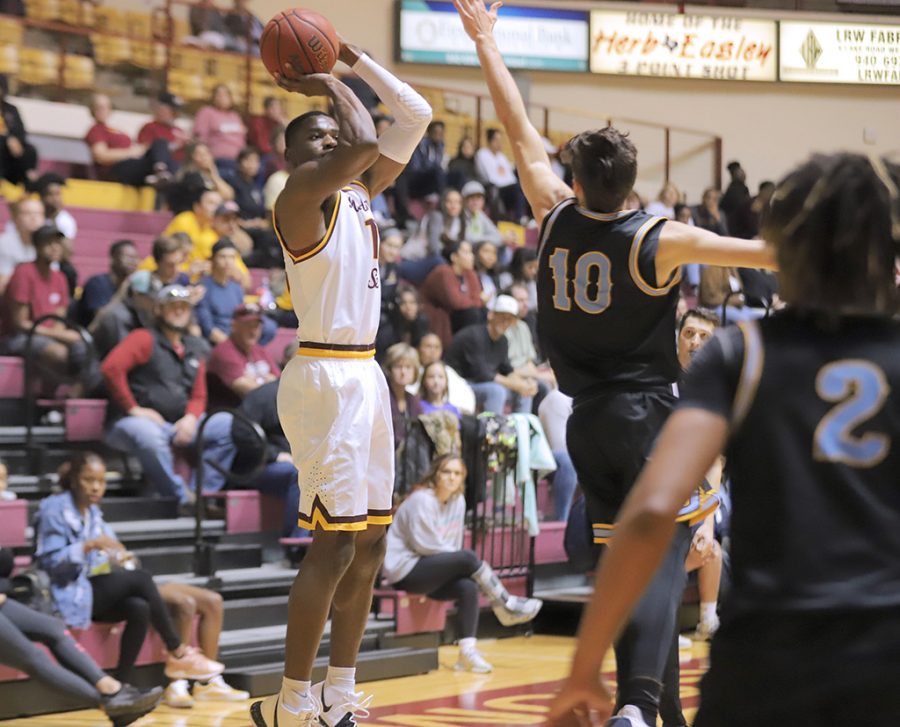 The men’s basketball’s comeback effort came up just short in the 70-66 loss to Texas Wesleyan Saturday, Nov. 16 at 7 p.m. in the Colosseum.

The ‘Stangs trailed the Rams 30-21 at the end of the first half, having not led since five minutes into the game. They slowly chipped away at the lead in the second half, and with 47 seconds remaining, Evan McCarthy (No. 23), guard and undecided freshman, made a free throw to give the home team a one-point lead. McCarthy also made a pivotal 3-pointer to tie the game the possession before. The comeback fell short as the Rams pulled away with a putback layup and two free-throws.

“The energy rised up [in the second half], and the intensity rised up,” Darius Thompson (No. 3), guard, and business and mass communication senior, said.

The comeback attempt was led by Thompson and D’monta Harris (No. 13), guard and undecided senior. The two seniors played the entire second half. Harris scored 13 of his 20 points in the second half, and he also contributed 12 rebounds. Thompson finished with 21 points, 11 rebounds, and two blocks. His 16 second-half points provided the ‘Stangs a spark.

“I saw the opportunities to score,” Thompson said. “I just took what they gave me.”

The men’s team is 0-4 and still looking for its first win under new head coach, Justin Leslie. They’ve lost by an average of seven points each game and have had only one deficit of more than 10 points.

The team gets its next chance for a victory against the University of Central Oklahoma Wednesday, Nov. 20 at 7 p.m. in Edmond, Oklahoma.