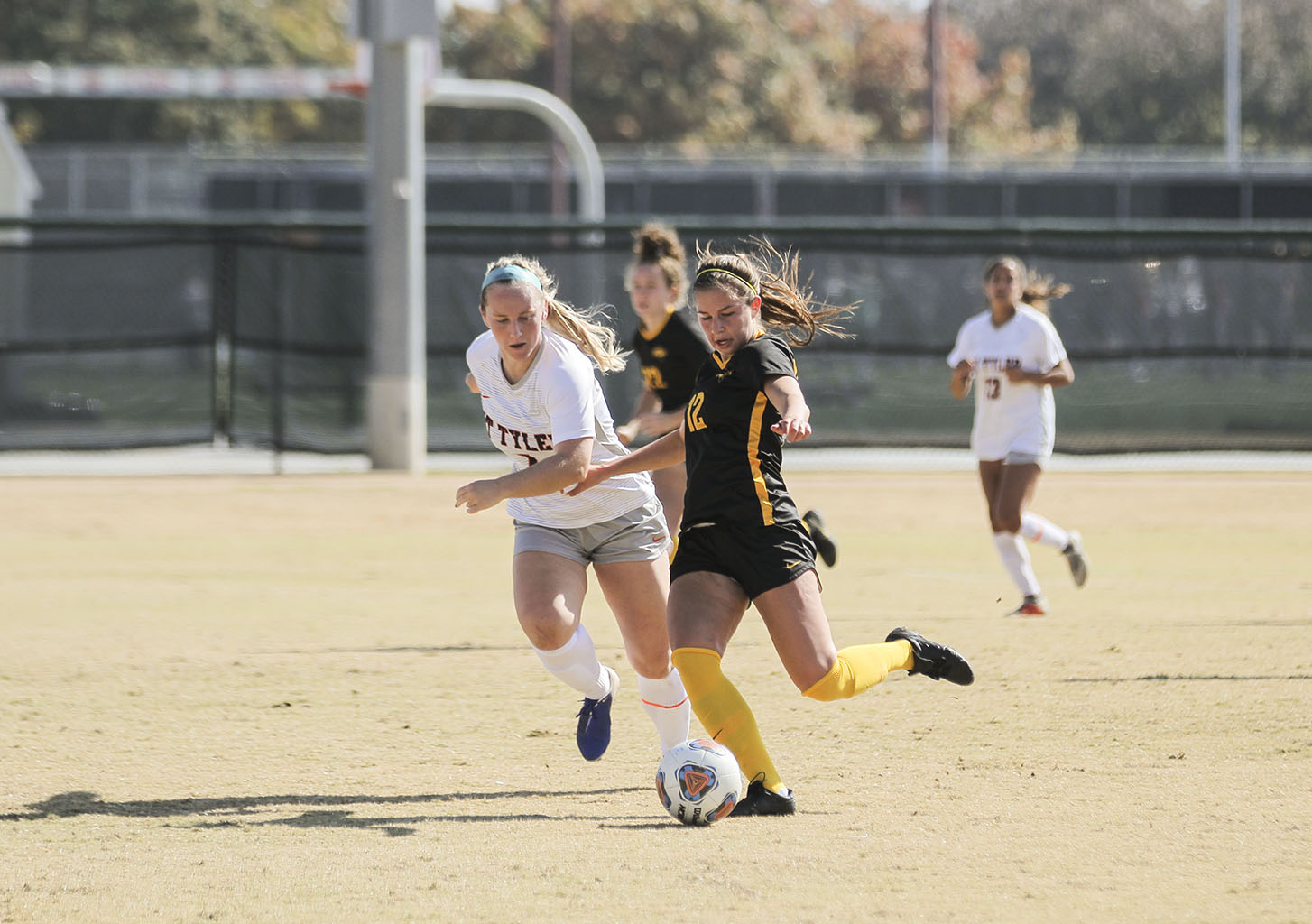 Pre-dentistry sophomore and midfielder Senna Garcia prepares to kick the ball to a teammate and keep it away from an opponent. Nov 9. Photo by Colin Stevenson. (Colin Stevenson)

Pre-dentistry sophomore and midfielder Senna Garcia prepares to kick the ball to a teammate and keep it away from an opponent. Nov 9. Photo by Colin Stevenson.

The women’s soccer team battled The University of Texas at Tyler to a 1-1 draw in two overtimes on senior day Saturday, Nov. 9 at 11:00 a.m. at Stang Park.

The home crowd used this game to say goodbye to the team’s three seniors: Imani Morlock (No. 21), defender and kinesiology senior, Sarah Stewart (No. 17), center back chemistry senior and Michaelann Greenfield (No. 24), midfielder and biology senior. Stewart scored a goal in the first half to give the team an early lead, and Morlock led the women on the defensive side of the ball.

“Imani’s been the heart of this team, Sarah’s the mom of this team, and [Michaelann] is one of the hardest working players [on the team],” Ryan Spence, head women’s soccer coach, said.

For the ‘Stangs, this game marks the 12th time this season one of their matches were decided by one goal or less. The women are now 1-9-2 in such games. With a team consisting mostly of underclassmen, Spence sees these games as learning opportunities for the young players.

This senior class is the second group of seniors Spence has had in his short MSU coaching career. Under his tutelage, the ‘Stangs have a record of 6-25-5, but this year the girls improved their record by two wins. Greenfield thinks it’s been an adjustment for both the coach and his players.

“Our old coach knew how to handle all our emotions, that’s been new to [Coach Spence],” Greenfield said. “It’s been an adjustment.”

CORRECTION: In a previous version of this story, we said that Sarah Stewart scored, this was incorrect. The Wichitan regrets this error.