A day in the life: Lacey Grimes 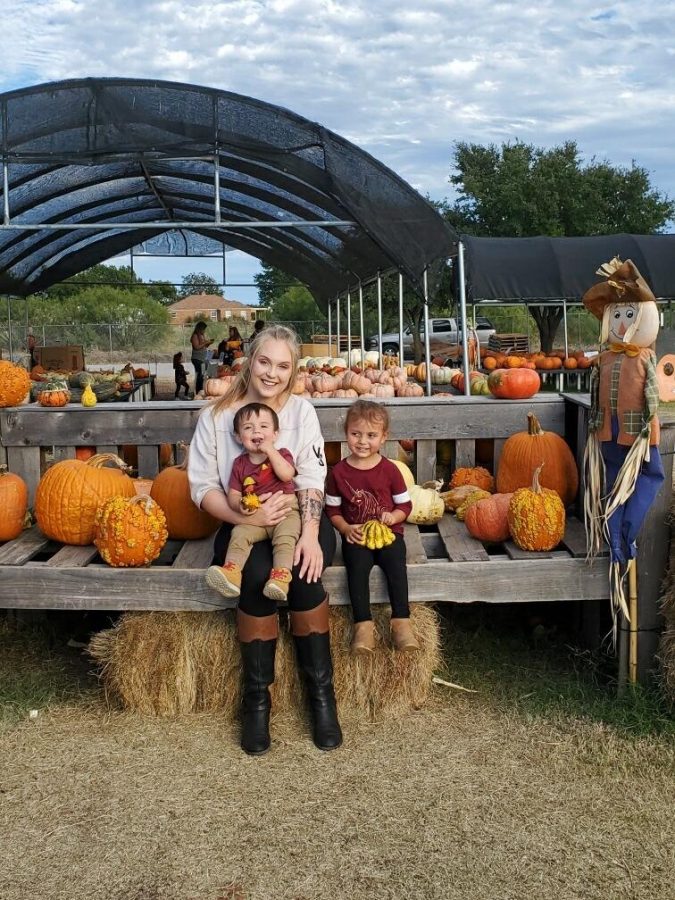 It’s 6 a.m. and while most students are sound asleep, her day has just begun. The sweet and tender voices of small children fill her ears forcing her eyes to partially open to a sun-filled room. She slowly takes in deep breaths as she mentally prepares for a new day full of surprises.

Lacey Grimes, psychology junior, is not only a part-time student but a mother of two children. Analicia, her four-year-old daughter, and Xander, her one-year-old son, are the reasons for Grimes’s dedication to finishing school.

“My kids are my motivation. After getting pregnant at 19, I knew that I had to make changes in my life because there was now someone depending on me,” Grimes said. “I know that with this degree I can give my children a better life than I ever had, so I cannot afford to fail.”

Grimes currently takes 10 class hours while working two jobs. She works at Maximus as a dancer once a week and serves as a bartender at Red Robin four times a week. Grimes said she focuses on one day at a time and tries her best to balance all her responsibilities as a student and mother.

“Though parenting alone makes going to school a lot harder, I have learned to compartmentalize my responsibilities by focusing on one day at a time,” Grimes said. “I set time aside strictly for course work and studying, but I also try to set time aside to do fun activities with my kids because they are my priority.”

Grimes said she has to keep two jobs just to afford school and her living expenses, and even with the help of FAFSA, she still has to come out of pocket for school.

“I get a small amount of money from FAFSA and a grant for my grades, but since I go to school part-time I only get half of the money, so I have to pay at least 1,000 dollars each semester,” Grimes said.

Despite having little to no help from her family, Grimes has maintained a 3.7 GPA and looks forward to getting her license as a professional counselor so she can work at an in-patient rehab center to help those who battle with addiction turn their lives around.

“I have a little help from my family, but not that much,” Grimes said. “My baby daddy’s mother watches my son while I’m at school, but I have to pay my mom to watch them when I have to go to work. Their father helps on the weekends sometimes, but I really do a lot on my own.”

Grimes said she struggles with getting a full night’s rest and normally receives three to six hours of sleep every night, from working late nights and finding time to study. Grimes describes a normal day for her as never being “normal” and because of her kids, she experiences a very different lifestyle than before she had children.

“It’s really hard sometimes and most days I’d rather stay in bed and sleep,” she said. “But I know in the end it will be worth it.”

Since her schedule leaves her little time for extra activities, Grimes is not involved on campus and she feels like she doesn’t get the true college experience.

“I barely have time to study or sleep, so I don’t have any extra time to get involved in organizations, but that’s okay,” said Grimes. “I am only here for an education, so missing out on a few parties or opportunities to make new friends doesn’t bother me. I have done enough of that in my life and I have plenty of friends.”

Outside of school and work, Grimes focuses on spending time with her kids. She said her favorite thing to do is inspire them.

“My kids are the reason I work so hard in school and at work, so it’s important that we have time together to build our relationship,” she said. “I try to make sure I inspire their minds and allow them to be free and creative. We spend a lot of time traveling to new cities, going to science museums, baking and doing arts and crafts. The smile on their face always makes my days brighter, and it reminds me to stay on track.”

Grimes said no matter how tough things may get, she refuses to quit.

“Giving up isn’t an option for me,” she said. “If I feel like giving up I just imagine where I’d be without this opportunity and it keeps me going. I want my kids to eventually live in a nice house and be granted opportunities that I never had.”