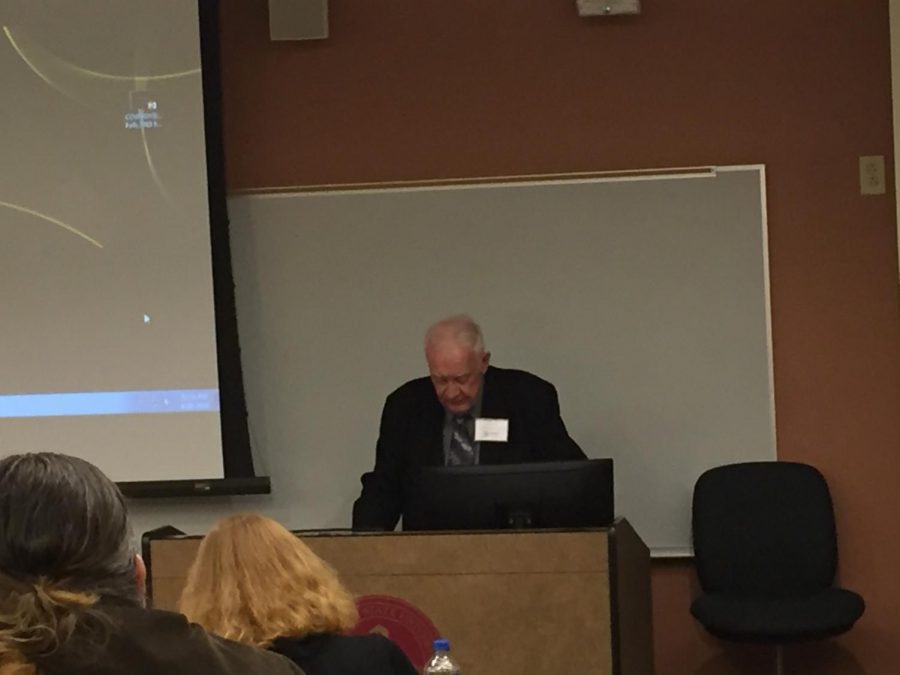 Everett Kindig speaking on "Life in the post-civil war Midwest: The Case of Susan Parmer," on April 26.

The University hosted the 12th annual Southern Forum on Agricultural, Rural, and Environmental History April 26-27 with 15 speakers from around the south speaking on their research.

Whitney Snow, associate professor of history, introduced herself as the host of this forum. Then after a short delay to make sure they started on time the first person got up to present.

Chandler Taylor the first presentation was over grain elevators and their history in Louisiana,“Legacies of Risk and Vice: The Birth and Expansion of Louisiana’s Grain Elevators”

Chandler Taylor is a dual masters student from Louisiana State University. She looked back to the start of it all in Louisiana from 1971 to the present day and talked about how in the book merchants of grain by Dan Morgan “to study grain is to study the world.” This was the start to her research on how it affected the economy.

“For him, the grain is more essential to the world than oil,” Taylor said.

She went on to talk about how the first grain elevator in Louisiana was founded in New Orleans and soon two more would be created all made out of wood. This, of course, leads to a fire breaking out and burned all but one to the ground. New ones were made out of metal to fix this problem.

Everett Kindig, a retired professor of Midwestern State University went second because Ian Seavey from Texas A&M was not able to make it for the presentation due to budget issues. Kindig a retired professor for nine months gave his research on “Life in the Post-Civil War Midwest: The Case of Susan Parmer.” Kindig started off speaking about how the rise of women rights was on the climb.

“The growing wants of expanding women’s rights here began in the 19th century and especially along with the frontier,” Kindig said.

He slowly leads into the life of this brave woman and her struggles on the frontier and how she came to be in our town. This included her brothers being bandits and her following her husband, as well as starting the first untied baptist church here.

After the first panel concluded everyone went on a 30-minute break before the next three speakers.

Snow used the free time and said she wanted to have more students come and listen to these speakers.

“Yes, I very much would and I advertised it to my students and there was a campus-wide email sent out,” Snow said.

She really wanted other faculty from other colleges to be there too.

“I am surprised that not more faculty is here, all the historical ones are but I wish that biology, environmental science was here,” Snow said. “I think we have a lot to say that can contribute because this is a history conference but I think we have something to say to other disciplines.”

CORRECTIONS: In a previous version of this story we did not fully state the name of the 12th annual Souther Forum on Agricultural, Rural and Environmental History. The Wichitan Regrets this error.

We also stated that Professor Kindig replaced another presenter this was incorrect, The Wichitan regrets this error.