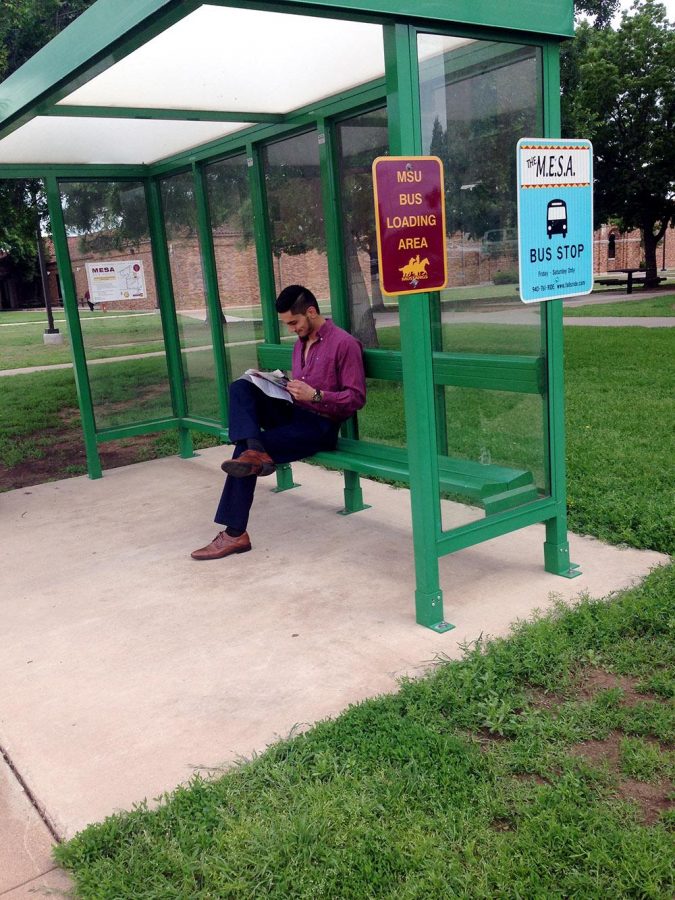 Nik Bolig, political science sophomore waits for the bus. He said the Saturday route would be more successful if they ran the normal route and times along with MESA route. Photo by Morgan Haire. 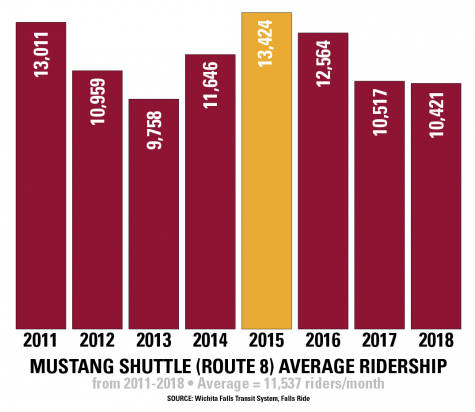 Getting around Wichita Falls without a car is a challenge.  But for college students, the university and the city try to make things a little easier

All students, whether they have a vehicle or not, can use any bus throughout the city just by showing their student ID — for free.

The service came to be as a part of a deal made with the city in 2011 for Mustang Shuttle, a deal that includes the Mustang Shuttle and the ability of students to use their IDs to ride any of the main seven busses.

Vice President of Student Affairs Keith Lamb said prior to working out a deal with the city, they had to resort to another way of helping international students get on and off campus.

Lamb said they wanted to bring transportation to students who may have had to live in the apartments on the outskirts of campus.

“Our main focus was on the students who lived in the nearby apartments,” Lamb said. “We came up with the idea of a Mustang route.”

“We run the shuttle and Mesa, but the school makes the routes,” Watson said.

The deal being formed was mutually beneficial, according to the Transit Administrator Dennis Burket.

“It helps our numbers immensely, and the numbers we give the FTA reflect on how much we get from grants,” Burket said. “They go into the big bucket of ridership.”

The Mesa route was a previously discontinued route for Sheppard Air Force Base that was revived as an addition to the Mustang Shuttle.

“Originally, we had the Mesa for the airmen, and we couldn’t get anyone to ride the dang thing, so we got rid of it,” Burket said. “We started it up with Midwestern, and it’s been a pretty good deal.”

Lamb said they knew the Mesa could prove useful.

“We realized students could use something on the weekends,” Lamb said. “We got with the city about reviving the Mesa route for MSU.”

Dispatcher Robert Jones said the money they get for the deal just relieves them of some of the overall expense.

Matthew Park, dean of students, said the deal is not expected to go anywhere, but there have been ideas of modifying it.

Park said they have considered a downtown route.

“We have looked at expanding the routes, but the problem with that is the more we expand the routes, the less frequent they become,” Lamb said. “We have talked with the city about adding a bus to go downtown though.”

Burket said they have already changed some things to further accommodate students.

“We’ve already modified the Connector route to pick up and drop off students at the upcoming dorm downtown,” Burket said. “But we don’t currently have plans to run any later.”

Since 2011, the Mustang Shuttle has been the most used route in the city, but the rest of the Falls Ride system has seen no gain in ridership. (In a casual poll less than 1/3 of the students knew that they could use any city bus by showing their ID, let alone that they are paying for that ability.)

“Frankly, we probably don’t do enough to let students know that they can use the whole transit system,” Lamb said.

Math freshman Chad Callender said he had to find out from an outside source.

“As a student, I knew I could use the Mustang Shuttle, but I had no idea I could use Falls Ride for free,” Callender said. “I found out about it through another person, who had already used the busses.”

The payment for the Mustang Shuttle, Mesa, and students using their IDs as bus passes ultimately comes from the students.

According to Park, last year the university paid $60,119 to the city for the bus service, which came from students through tuition and fees.

Students pay approximately $5 per semester for these services.

“Telling them that they can use it might be useful, but I don’t see a whole lot of people really using it, especially not like here,” Callender said. “But telling people that they’re paying for it would probably be nice too.”

Falls Ride began running a night bus, called the Nightcrawler, that was designed for people who get off or need to get to work after the city buses stop running at 7 p.m.

This system does not come with the current deal with the city but could possibly prove to be beneficial if added.

“We could definitely consider it, but we would need more details about it to actually make a decision,” Park said.

Lamb said it could be really good for students but would need to be discussed more.