‘The Good Place’ a heavenly comedy about philosophy 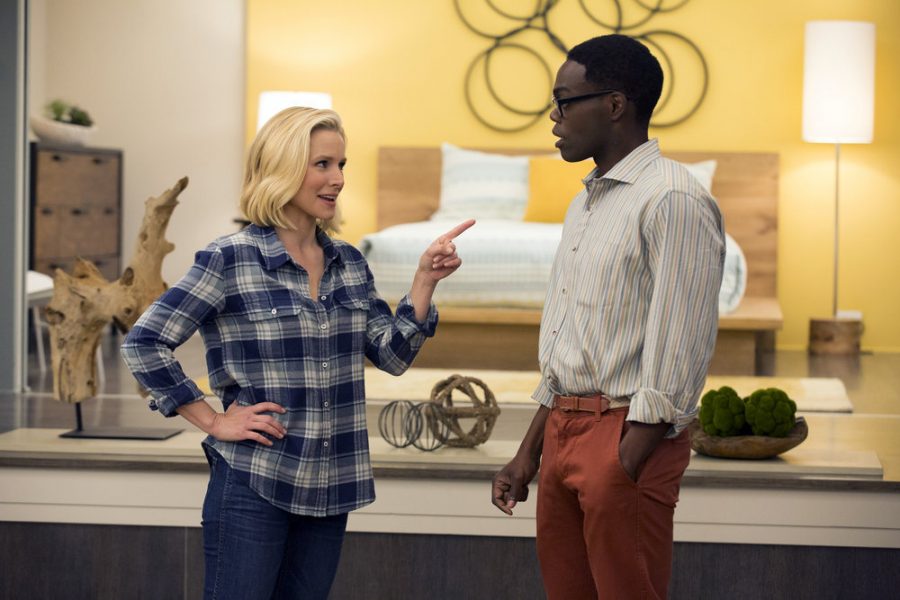 Kristen Bell and William Jackson Harper in The Good Place (2016)

When Eleanor Shellstrop wakes up in heaven, she knows something is very wrong.

That is the premise behind the hit comedy series “The Good Place.” Created by Michael Shur, the producer of hits like “Parks and Rec” and “Brooklyn Nine-Nine,” “The Good Place” has something for everyone: hilarious characters, a fast-paced story, and surprisingly, a lot of philosophy.

Let’s slow down. Eleanor Shellstrop (played by a loveable Kristen Bell) was a bad person. Not just a little bad, but a completely selfish and mean troublemaker. For example, she shamelessly sold fake medicine to old people and totally disregarded her designated driver duties to go sleep with a guy she just met. So it’s no surprise that when the perpetually bow-tied architect of her new eternal neighborhood, Michael (Ted Danson), lauds her good deeds and welcomes her to paradise, Eleanor knows that something’s definitely not right.

Eleanor is quickly paired with a soulmate, a person cosmically designed to be 100% compatible, named Chidi Anagonye, a moral philosophy professor who overanalyzes every little action he does. He mistakenly agrees to help Eleanor become a “good person” so that maybe she won’t be sent to The Bad Place and that’s where the fun begins.

The mismatched duo is rounded out by Tahani Al Jamil (Jameela Jamil), a snooty British socialite who loves to namedrop her celebrity friends (Princess Diana is her godmother and Beyonce is her best friend) and is described as, “a big, beautiful, utterly perfect cartoon giraffe” by a very jealous Eleanor.

Tahani’s soulmate is Jiyanu Li, a Tibetan monk who upholds his vow of silence even while in this non-denominational heaven. Michael is assisted by a Siri-like entity named Janet (D’arcy Carden), who’s helpful fact-finding skills and brutal honesty keep Eleanor and the gang in their place.

The beauty of “The Good Place” is in its relentless story-telling. Each 20-minute episode ends on a cliffhanger, constantly pushing the story forward in sometimes unexpected ways. The writers aren’t afraid to turn everything they’ve built on its head and blaze a new storyline, keeping the audience on their toes at all times. It’s a temptingly bingeable series and its pointed commentary about the modern world always seem fresh and relevant.

“The Good Place” also has another thing going for it that few successful comedies can boast: philosophy, and a lot of it. While Chidi is teaching Eleanor the basics of moral philosophy, the audience is soaking it up as well, but surprisingly, it’s not boring. Somehow, Michael Schur and his team have found a way to make learning about Kierkegaard, Aristotle and Utilitarianism fun and interesting while not overloading on information. It’s a delicate balance that might just leave you spouting out a thoughtful discussion on Existentialism at your next dinner party.

So settle in for your moral philosophy lesson disguised as a critically-acclaimed sit-com. “The Good Place” is a great option for those Netflixers who settle for rewatching “The Office” for the hundredth time and its zig-zagging plot twists will you keep you hooked from the start.

The first two seasons of “The Good Place” can be found on Netflix.