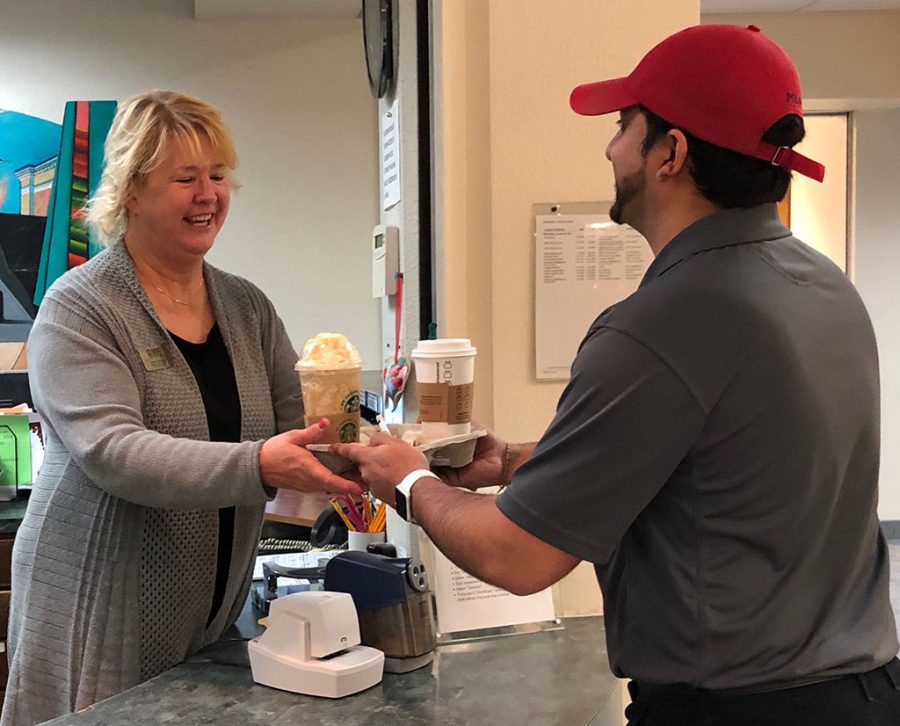 MustanGO entered its “beta” phase, with the coffee shop in Moffett Library now offering a delivery service to faculty and staff, for flex dollars.

Manny Bhogal, Chartwells marketing specialist, is the brainchild behind MustanGo.

“I was initially tasked with increasing the revenue at Starbucks,” Bhogal said. “I came up with the delivery idea because I was once a student here.  It’s also much more personable to have someone from the school delivering to you, and there’s less of a chance of your food being cold, because the person making the deliveries is going to know exactly how to get to you.”

Bhogal said that while his expectations haven’t fully been met, he does have reason to be encouraged by the project.

“It hasn’t currently met my expectations, because I haven’t opened it up to students yet, but we have seen a small bump in flex dollars purchased by faculty,” Bhogal said.

Bhogal explained that this is all part of a long-term plan that would include delivery to students, as well as faculty and staff, from all food locations on campus.

“I am hoping it doesn’t take longer than about a year and a half to fully expand throughout the campus,” Bhogal said. “And I am hoping to at least expand the Starbucks service to some students by mid February.”

Amber Hernandez, pre-psych sophomore, is a Chartwells employee, who began her work with the project about two months before it started.

“I helped a little bit with the planning,” Hernandez said.

Hernandez also believes that it would be easy to expand to students, which would be mutually beneficial for Chartwells and MSU.

“Since we have increased our numbers since it started, it’s definitely possible to move on and expand to students,” Hernandez said. “It could benefit the school also, and it would help students easily get their coffee fix.”

One of the most prominent users of the MustanGO service is the Assistant to the President Betsy Tucker.

“Manny came by the Thursday before classes started to tell us about it, and we were so excited that we tried to order the next day,”  Tucker said. “I believe we have used it on four occasions in the last two weeks.”

Tucker also said that she would love for the delivery system to expand to other areas, such as Chick-fil-A and Burrito Bowl.

“There have been days where I’m just stuck in the office at lunch, and I’ve thought about how nice it would be to have Chick-fil-A.  I would love that,” Tucker said.