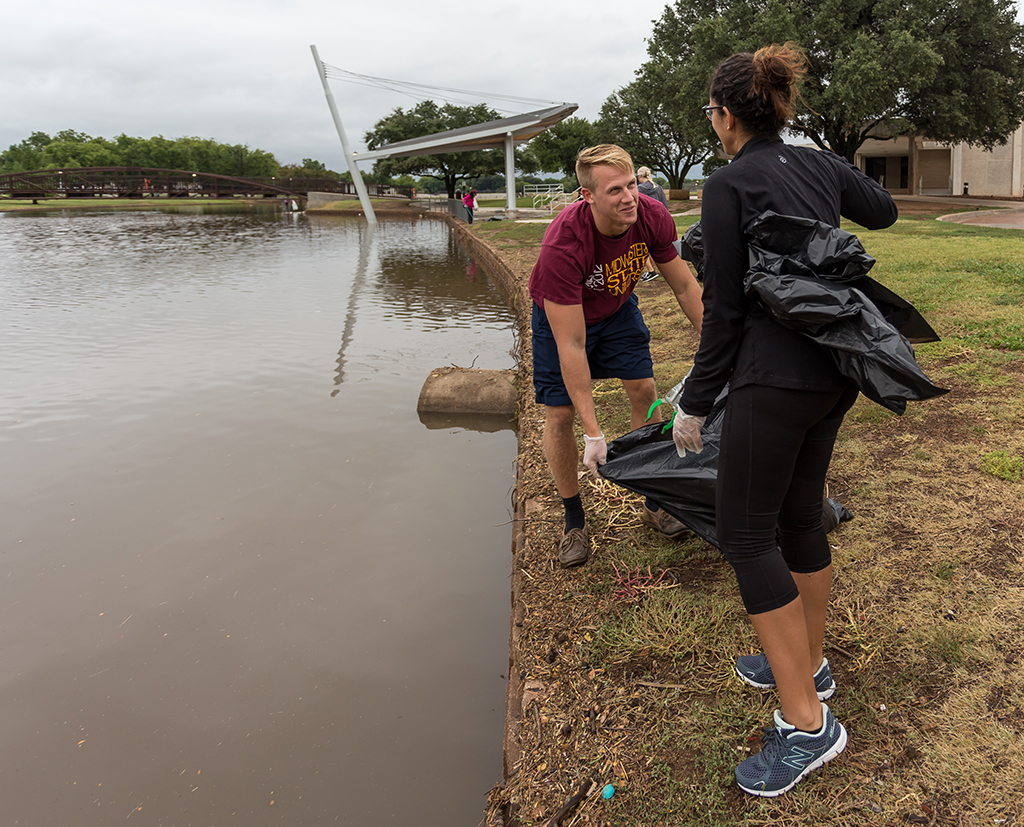 The water glows with a golden hue as the Texas sun sets on Sikes Lake. The soft wind pushes the water along, the waves creating an image that looks like a painting. The wildlife goes to rest while the stars begin to shine. Moonlight is the only light allowing the joggers to see. MSU established Sikes lake in 1960. The lake sits behind the Redwine Wellness Center and has about a 1-mile perimeter. The lake is home to different annual events such as the homecoming boat race and the Turkey Trot.

“Sikes is a good area to just get away,” Teri Higgins, general business freshman, said. “It’s not too far from campus and its really nice out here. But there is a lot of geese poop.”

According to Higgins, many runners had to dodge the geese poop during the Turkey Trot.

“We did a cleanup of the lake at the beginning of the year with the golf team,” Anna Kittelson, undecided freshman, said. “There should be more cleanups of the lake, either by sports teams or student organizations. It would be really nice if someone came out here before events and power washed the walkways.”

According to Kyle Owen, facilities services associate vice president, since the geese are protected, it is difficult to get them to leave the area.

“The only thing you can do to break their habits is to stay about two weeks out there, going around and every time they land you’d have to shoo them off.” said Owen. “You could do that with a dog on the perimeter, but then they go in the water. So then you need probably more than one boat in the water at all times, including at night. Then it becomes a 24/7 operation.”

Owen said, three groundskeepers maintain the lake on a daily basis. The groundskeepers tend not only to Sikes lake, but also to the Wellness Center and Sikes House. The lake hasn’t been dredged since 2001 when the state, city and university contributed to the $1.8 million project.

“We looked into dredging the lake during the drought,” Owen said. “There was less water in the lake and the north end looked pretty bad. We checked and realized there weren’t any funds available. We were hoping maybe there was a grant available but there was not.”

If the lake is not dredged, it is possible that it could collect so much salt that the lake would then be classified as a wetland. If that happens, then under the rules of the Federal Wetland Program, the public would be restricted from using the lake.

“Every year we put in requests for funding,” Owen said. “Particularly when the legislature’s in session every two years. We put a wish list together and sometimes they fund that. Last time they did it, they gave us $15 million and we built all these buildings, but we first tried to get that funding 10 years prior, so it’s not like it happens every two years. If, by chance, the legislature were to fund it, in theory we would have it but I’m not overly optimistic it will happen this session because they awarded tuition revenue bonds in 2015. Dredging the lake is at the top of our list but who knows, something may come up within the next two years that’s a bigger issue.”

If the lake were to be dredged again, 90,000 cubic yards of silt would be taken to a 77.42 acre property that the university owns. The project would cost $1.8 million and would raise the average depth of the lake from 2 feet to 5 feet.

“The lake should be dredged,” Conner Chamberlain, math sophomore, said. “It would be a shame if we lost our own lake because we couldn’t afford to keep it clean.”

Becoming a brother of Delta Sigma Pi is so much more than joining a group of young professionals. Becoming a Delta Sig is about furthering your social skills, building your professional resume and volunteering in the local community! 👔 #PledgeDSP