‘[Cathcart] has an infectious spirit of joy’ 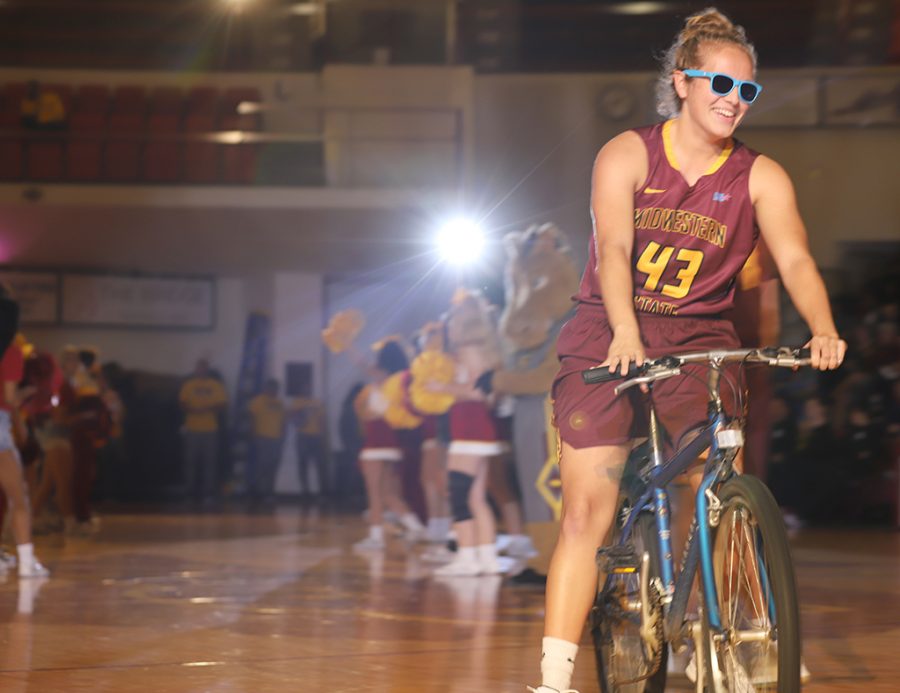 Marketing junior Liz Cathcart makes her debut on the court in style during Mustang Madness Oct. 25.

Marketing senior and member of the basketball team Elizabeth Cathcart wakes up at 5:50 a.m. to the smell of spoiled milk that she left in her trash. Rolling out of bed, she snags half of a mini bagel and bikes over to the gym where she starts her morning grind at 6:15 a.m.

Headphones in, Elizabeth breaks a sweat working on ball handling and jump shots. Her motivational music playlist consists of Spanish and Christian tracks. She said her love of culture and religion is the foundation of who she is.

“I grew up with Spanish music playing in the house and on the radio around certain relatives,” Elizabeth said. “God made music to be joyful and bring praises. It has always been a positive outlet for me and I want it to stay that way in my life.”

Around 7:30 a.m., Elizabeth wraps up her personal workout and heads home to shower and nap in preparation for the long day ahead, full of school work and basketball. Although her days are jam-packed, she said she enjoys the structure and feels like it keeps her accountable on and off the court.

“Our coaches force us to study two hours a week, something I never did in high school, and it has definitely been beneficial,” Elizabeth said. “An active lifestyle and setting goals for myself has kept me out of trouble and harmful situations. Having sports and a great support system has helped me stay grounded.”

Elizabeth takes classes such as Marketing Research and Marketing Metrics, which are both required to complete her degree. With hopes to become a chartered financial analyst, she’s looking to pursue her master’s and said the decision to further her education even more was stressful, but knows that it will pay off.

“These collegiate standardized tests hold immense weight in what masters programs accept you and the best schools are very selective,” Elizabeth said. “I like working with money and investments, so finance just made sense to me.”

Finance sophomore and Elizabeth’s roommate, Haevyn Risley, said Elizabeth never sells herself short when it comes to education and enjoys being able to study with someone who is determined to succeed academically.

“Elizabeth gives 100 percent effort, not only in her schooling, but in everything she does,” Risley said. “She strives to be the best she can be and will do whatever it takes.”

At 3 p.m. Elizabeth joins her teammates for practice. Running anywhere between two and three hours, she and her teammates endure a strenuous practice consisting of work on the court and in the weight room. Finance junior and teammate, Mica Schneider, admires Elizabeth’s positivity and grit.

“Elizabeth is the type of friend to put a smile on your face with her goofy and caring personality,” Schneider said. “I have had the pleasure of knowing her for about seven years now and she has always been the hardest worker in the gym and puts in the extra work when no one is watching.”

Over her collegiate basketball career, Elizabeth has sustained injuries such as impingement syndrome, bone contusions, and a partial tear in her deltoid ligament. She attends treatment, consisting of injury prevention and rehabilitation, to battle preexisting injuries and strives to prevent others.

“Think of a statistics class where assumptions are made based off of perfect conditions,” Elizabeth said. “Anyone who has picked up a ball or has played any type of organized sport knows that injuries change everything.”

Around 7:30 p.m., Elizabeth heads home for a dinner that she has had prepared since her lunch break at noon. Her passion for cooking authentic Mexican food is inspired by her heritage and parent’s encouragement. Elizabeth said she looks up to her parents for strength and guidance. Her mother, Teresa Cathcart, described Elizabeth as full of life and has contagious energy.

“I believe my daughter is an honorable and focused young lady,” Teresa said. “She has an infectious spirit of joy and lights up a room. Elizabeth has brought so much joy to our family and gives 100 percent to everything she does.”

Elizabeth has two brothers, Nathaniel and David, who she said have helped instill strength and courage within her character. Nathaniel, who is 16, said he loves his sister and whatever she has to say he takes to heart.

“She’s my sister and I love her,” Nathaniel said. “I look up to her and I really listen to whatever she has to tell me. Elizabeth is always there for me.”

In Elizabeth’s free time, she enjoys playing instruments such as the ukulele or guitar and writing songs. Behind her laid-back personality, Elizabeth said she has always used music as an outlet for self-expression.

“I’m very introverted and struggle with expressing my feelings,” Elizabeth said. “I write songs and compose music whenever my mind doesn’t shut up. It helps straighten out my thoughts and confronts what I tend to hide away.”

Jonell Davis, a family friend, said she has been impressed with Elizabeth’s musical ability since the first time she heard her strumming a ukulele and singing in the kitchen.

“When I heard singing, I assumed it was my youngest playing her music out loud,” Davis said. “When I walked into the kitchen to find her there, I was pleasantly surprised. She has talent as an athlete and as a musician, which is not common.”

Through it all, Elizabeth said she wants to remain audacious and continue inspiring others to be positive.

“I want my life to be a continuous adventure full of joy and new thrills,” Elizabeth said. “My faith, friends, family, and even my dog Rascal have all pushed me to never settle.” 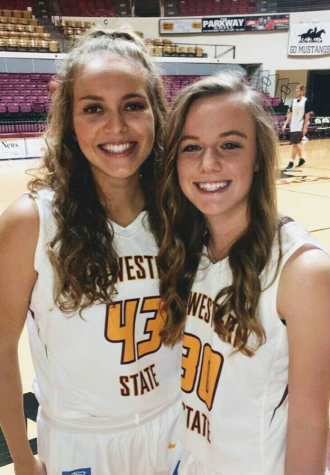