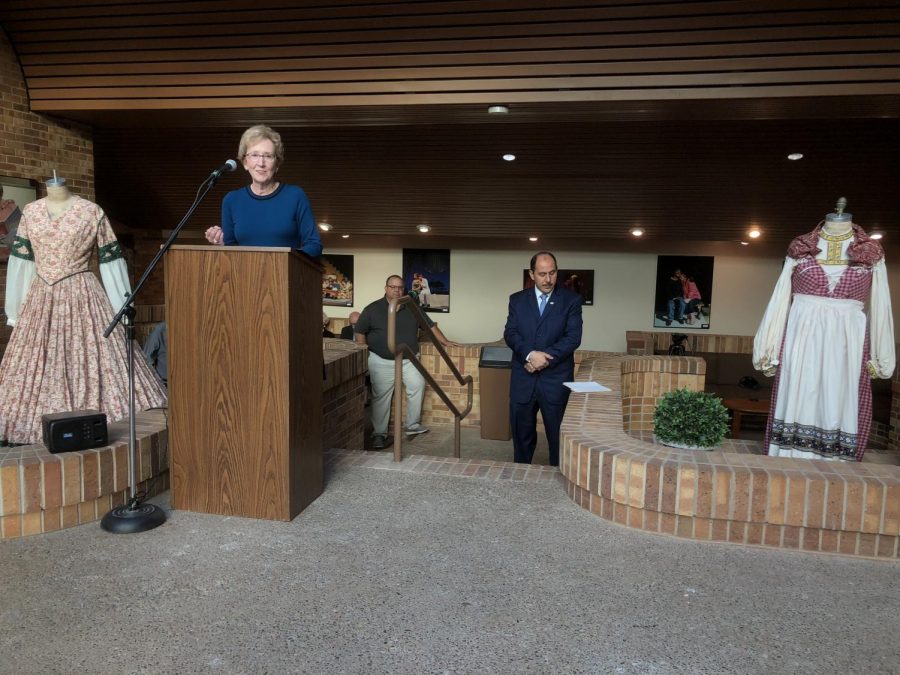 University President Suzanne Shipley discusses the evolution of the Fine Arts Center at the 40th anniversary of the building.

When Paul and Patti Stillson graduated in 1971 and 1973, respectively, with degrees in art, there was no fine arts building.

“We were not in this building. We were in a building across campus. They were barracks buildings (the university) got from Sheppard,” Paul Stillson said.

Patti Stillson said there wasn’t a single building for the art department alone.

“The art department was very small. We used some other buildings that were on some other parts of campus,” Patti Stillson said.

Forty-seven years later, at the 40th anniversary for the Fain Fine Arts Center, officials said that they were happy with what it has become.

“It’s good to see the continuing growing of the department, the teachers here and the new things the students are learning,” Paul Stillson said.

More than 130 people attended the Oct. 9 event, including alumni, current students, and former and current staff.

After opening addresses by Martin Camacho, dean of the College of Fine Arts, and Suzanne Shipley, president of the university, the guests were offered tours of the facilities by students and invited to a performance of Dracula.

“Forty years later, the Fain Fine Arts Center still provides a unique experience for students and faculty,” Camacho said in his speech, “This is a story of hard work, perseverance and the exploration of beauty in the arts, and the search for academic excellence. The Fain Fine arts center is well positioned for the next 40 years.”

Shipley said the Fain building was designed to be anything but generic.

“It was named in recognition of the Fain Foundation of Wichita Falls. (Martha Fain’s) support for our programming, our students, faculty, and in the upkeep of these wonderful facilities has made the difference. So, if we didn’t have this college, we’d rush right up to create it,” Shipley said.

Debbie Barrow, director of board and governor relations, and an alumni from the class of 1978, said the facilities are amazing.

“The lighting has changed. The makeup rooms have changed. In the beginning, there was only enough funding for theater and art, and (It’s amazing.) to see how music has been brought, and we’ve added mass communication, so it’s very gratifying to me to see that the fine arts are together and expanding,” Barrow said, echoing a sentiment present in Camacho’s speech.

“The building has changed over time. The spaces have been modernized to suit the current needs of the programs. We were really very careful about maintaining the integrity of the building when doing the renovations,” Camacho said.

Julie Scales, secretary for undergraduate research graduated in 1991 with a bachelor’s in fine arts, and has seen the Fine Arts Center evolve over 27 years.

“I come to theater shows quite often,” Scales said, “It’s really nice to see what they have done progression-wise.”

Elizabeth Lewandowski, chair and professor of theater, joined the campus in 1992, described being excited on her first day.

“I was excited to get started working with a group of people I really liked on a campus that seemed to be a great place to work,” Lewandowski said. “They are beautiful facilities. It’s nice that the theater is all contained in one building.”

Christie Maturo, assistant professor of theater, said there is a sense of stability with the department.

“It feels structured, and it’s nice to have that consistency,” Maturo said. “We’ve gotten some improvements to the equipment we’ve had for the mainstage, and some improvements have been made to the studio. There’s still things to work toward but we’ve made some progress.”

Eric Koger, associate professor of theater, said that there were several improvements to the facilities.

“Stage floors been redone. Dimmers have been replaced. We now have a loft on stage right and a bunch of lighting things have been fixed,” Koger said.

“It shows how far the department has come, to see the people who have been here since the beginning coming to see our production with everyone new. It’s been a long journey to get here,” Gaut said.

CORRECTION: In an earlier version of this story, Dean Martin Camacho’s name was spelled incorrectly. In addition, Sheppard Air Force Base was misspelled. The Wichitan regrets the errors.