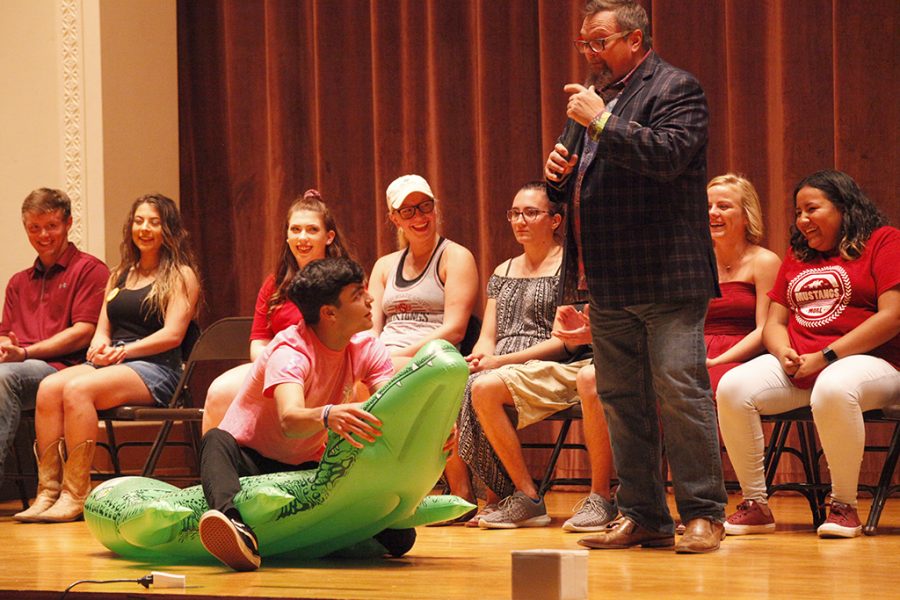 To entertain students and their families during Family Day Weekend and give them an opportunity to be the star of the show/experience being hypnotized, hypnotist C.J. Johnson performed an hour long routine in Akin Auditorium.

C.J. Johnson, who is apart of production company To Go Events, has been performing hypnosis shows on campus since the early 2000’s where he would do three or four shows a summer.

“I bet this has been my 20th time here over the past 16 or 17 years. A bunch of those were clumped in those four summers of doing three or four shows during the summer and probably every other year, every third year I come up for family day,” Johnson said.

Johnson’s favorite routine to perform is, the virtual reality show which he started incorporating into his performances in May.

“I’m having fun with the virtual reality routine right now,” Johnson said. “It’s the newest thing in the show. It’s a nice chunk, it’s really gotten it’s legs and I’ve found all the beats that are in it. I’m gonna start adding a couple of other beats in it. I got to work with one the best minds in the entertainment world on writing that bit. He really helped me so that’s kind of my favorite right now and that’s because it’s new. Last May, I think, is when we put it in the show.”

Family Day Weekend is an enjoyable experience for Johnson because he gets to see parents and students together.

“I like family days because you get see the moms and dads,” Johnson said. “Most of the time it’s just the adults — like mom and dad age or grandma and grandpa age at casinos — or like at colleges where it’s just the college students. Getting to see everyone together having a mom on stage, making her son or daughter like ‘oh my gosh that’s my mom who’s up there’ that’s awesome. That’s kind of fun, the parents getting to see a little bit about what college life is like out of the classroom, that’s also fun.”

Armondo Rubio, mechanical engineering junior and resident assistant, did not have any family members visit, but said the hypnosis was his favorite family day activity.

“I’m actually an RA so we had to support all the activities that go on around campus,” Rubio said. “I would say actually the hypnotist [was my favorite family day activity because] it was really interesting and really fun to see everything go on.”

Mikayla Tyson, sociology freshman, who participated in the hypnosis routine and fully experienced the performance, said she brought what she referred to as her second family.

“They’re not related to me, but they’re my second family,” Tyson said. “They’ve taken care of me for like, ever.”

“It’s definitely time to get together with your family and enjoy it for the weekend because you do’t get to see them as often and it’s definitely fulfilling and momental,” Tyson said.