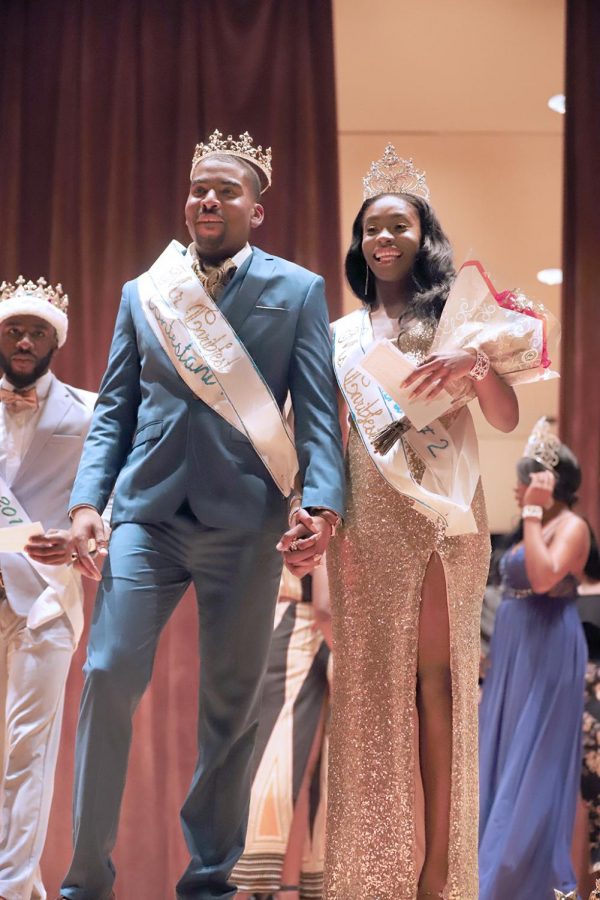 Steven Williams and Lydie Joseph are crowned the new king and queen of Caribfest 2018. Photo by Demian Ponce.

Gold, glitz and glamour coated the night in Akin Auditorium that would make Jay Gatsby envious as the annual Mr. and Ms. Caribfest pageant leaned into “The Great Gatsby” theme.

The festivity, part of the Caribfest, allowed students in the Caribbean Student Organization to showcase the vibrant culture and unite the students from the various islands in the Caribbean in just a few days on campus and to get dressed up for the elegant evening.

“It gives the campus a different feel, we share the event to give MSU a taste of our culture, we want to bring Wichita Falls the same,” Giselle Crooke, accounting senior, said. “We just want everyone to come out, eat our food and enjoy our culture.”

The excitement of Caribfest extends further than just the students on campus, and Wade Courtney, MSU Texas and CSO alumni, said the event is one of the most exciting times for him, and “it is phenomenal.”

Much like the laid-back culture is represented on campus, so is the “island time” as the event was pushed to 7:55 p.m. instead of the 7 p.m. start time initially indicated for the event. Sponsors of the event are from the MSU Texas alumni association and CSO alumni to the various community leaders who help fund it as well, this gives CSO the opportunity to showcase their culture through multiple events that typically span the early evening to late hours of the night. Two hundred people were estimated to be there.

The first Ms. Caribfest contestant Breanna Leary, exercise physiology sophomore from the Bahamas, did a contemporary dance routine to Beyonce’s’ “Pretty Hurts” to speak about the struggles of feeling beautiful and accepting yourself in today’s social media crazed society. In the music video for “Pretty Hurts,” Beyonce’s character competes in a beauty pageant.

Eyes wide and a sense of chills were in the air, the audience listened to first Mr. Caribfest contestant Taris Major, architecture and mechanical engineering senior from the Bahamas, perform a dramatic speech, infused with music about the alleged links between mental health and school shootings. Major acted as if he was walking to class and was killed in a school shooting and then rose up in dark lighting to give his speech.

The swimsuit portion followed the talent portion and Roach joked that “This is my favorite section of the pageant!”

As Major strutted out in a Bahamas themed towel, he quickly removed it to reveal his very fitted yellow shorts, and the audience went absolutely wild. People were cheering and yelling as Major strutted around posing and even flexed his cheeks.

After the judges rated each contestant on criteria like “muscle tone and fitness,” “colors” and other things there, was a long intermission were some musical performances filled the space.

After some time, the evening wear portions began.

Each contestant slowly walked out to music and did their routine before stopping in the middle and talking with the emcees. The emcees had two hats in their hands, each hat with questions in them. Each contestant had to draw, or “dip” as the emcees kept referring to it, for their questions – assumed to add variety and fairness.

Each contestant answered a question referring back to their platform and one question about their biography.

Leary said, “I want people to know that when you overcome such issues [low self-confidence and body image] it open a lot of doors and opportunities that makes life easier…I just want everyone to know they’re truly beautiful.”

However, the audience was supportive, yelling things like ”It’s okay! That’s okay! It’s okay honey! You got this!” to help and encourage the contestant to go on and keep trying.

After all the contestants answered their questions classic pageant style, the show moved onto the results of the pageant, the most anticipated part of the show.

But, the results were not announced before the Soca show winners from the previous night performed. Mr. and Ms. Caribfest 2017 walked out in evening wear while an audio played wishing the contestants the best of luck. The emcees had to stall while “technical difficulties” were dealt with. Henry sang “Perfect” by Ed Sheeran. At least 45 minutes to an hour, the results were announced.

Each contestant got awarded a multitude of awards, such as, “Best Personality,” “Best Swimsuit” and of course, participation awards.

Despite lighting issues where the lights were dimmed off or on at the wrong times, a late start, and technical difficulties, the Mr. and Ms. Caribfest 2018 was a celebration of the islands culture and once again CSO was able to showcase their roots in an elegant pageant, complete with a king and queen.

This year’s theme is “The Great Gatsby” pic.twitter.com/WBEg8oQ3da