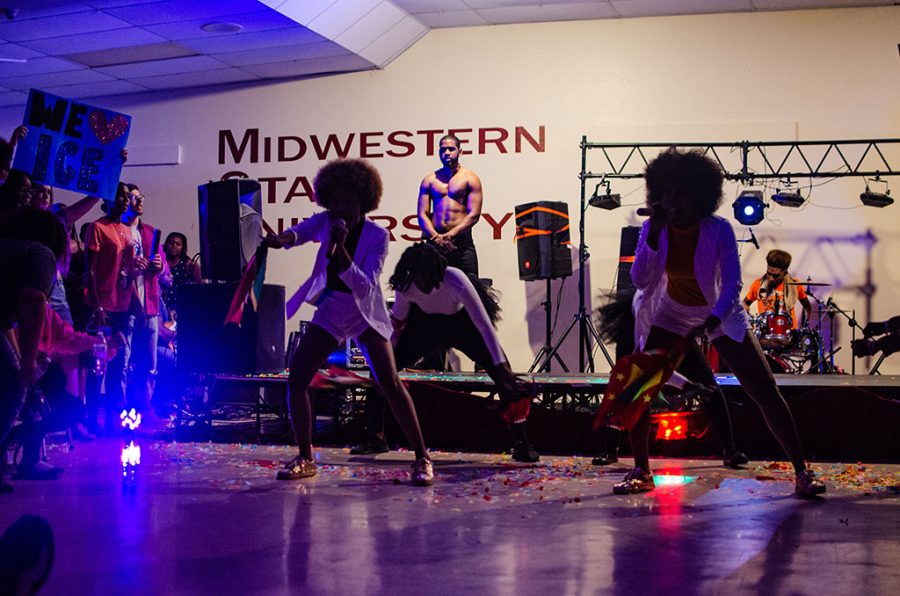 The last of the 11 performances at the Soca Show for the 21st annual Caribfest brought the crowd to their feet as the night closed out on Thursday, Oct. 4, 2018. Photo by Will Schultz

As the lights flashed around the Sikes Lake Center and the thump of the music reverberated through the performers’ and audience’s chests, the Soca Show kicked off the 21st annual Caribfest Oct. 4 at 7:30 p.m.

As the members of the Caribbean Student Organization put the final touches on the colorful event, they said this brings home a little bit closer to campus and welcomes non-Caribbean students to observe and be a part of another culture.

“Being far away from home, it was a great way to connect back to my country and to the Caribbean,” Chad Callender, accounting freshman, said. “It was a great experience, it felt like home.”

The Soca Show is an annual event that allows Caribbean students to write their own songs and music. Eleven performances from students showcased original songs while four judges scored each aspect of the performances.

“The judges are alumni of the Caribbean Student Organization,” Giselle Crooke, accounting junior and CSO chair member, said. “They were chosen based on their backgrounds, so some have been in bands and some have been backup singers.”

The judges, Rondell Campbell, Rerisha James, Klayne Tonlon and Nikki Hagley, chose the winner who received a sponsorship from the alumni association.

“When I was in the top five, I was like ‘Okay, I’ll probably get fourth or fifth,’” Steven Williams, marketing freshman and Soca Show winner, said. “Then I got to the top two and I thought ‘Shoot, I’m about to win this.’ I wasn’t expecting it at all.”

According to Williams, the event is a great way to build confidence and musical ability.

“The fact that people who never get the chance to show their musical ability get the chance to do it here,” Ray Roberts, history junior, said. “Sometimes you think you’re not good at something, then you try it and you realize that you can do it. I like how it gives people to express themselves musically.”

All of the music and songs were originally created. Performers wrote the lyrics and different DJs wrote the music to the song.

“I practiced for about a week and a half,” Gareth Neckles, marketing freshman, said. “I didn’t have props or an intro video or anything, I just did it for fun and to add to the number of performers.”

The Soca Show provides the opportunity for students to express themselves even if it’s not Soca music.

“I love music, music is me,” Mikhail Salter, management information systems senior, said. “I’m not really a Soca artist, I do reggae and rap. Soca is not something I’m comfortable with, but I said that I will do my best anyway.”