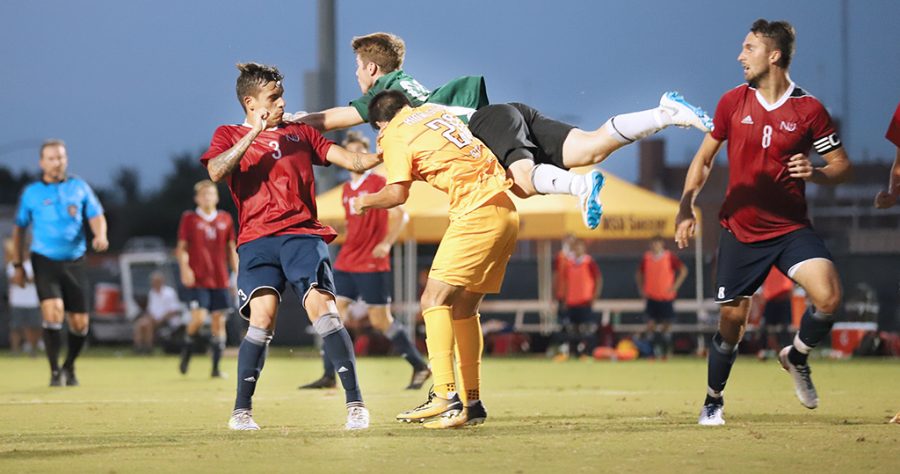 The men’s soccer team defeated Newman 3-1 on Saturday, making that their 28 straight win.

Although the team won, head coach Michael Meachum said that the team “didn’t quiet show up.”

“After this game we plan on working on everything,” Meachum said. “We were not good today. We played really well the first four games. Unfortunately today we just didn’t quiet show up, but one sign of a good team is one that can win bad games. We were fortunate enough today to win a game that we didn’t perform very well in.”

Taylor Lampe, goalkeeper and exercise physiology sophomore, agreed with Meachum saying that today was not the team’s best.

“We want to start out every game flying like we have in the past,” Lampe said. “Today wasn’t a great performance, but we were able to come out and still take the win.”

Along with being undefeated so far this season, the team is also ranked number one in the nation.

“This program has a way of winning,” Lampe said. “We want to keep our spot and it’s going to take a lot of hard work and dedication and we plan on putting in all the work it takes.”

Hard work, according to Meachum, is what got the team to number one and is what is going to keep them there.

“We’ve taken care of business in past games,” Meachum said. “The guys have been putting in a tremendous amount of work on the training field and in the weight room, and we’re just going to keep doing that and taking it one game at a time.”

Sedona Swanner, radiology sophomore, said that she notices the work and dedication each player puts into every game.

“I think the sport is just really interesting to watch,” Swanner said. “But knowing that we are fighting to keep a title makes it even more intense and gives me a little more pride as a fan. I can definitely tell that the team has put in a lot of work to get here.”