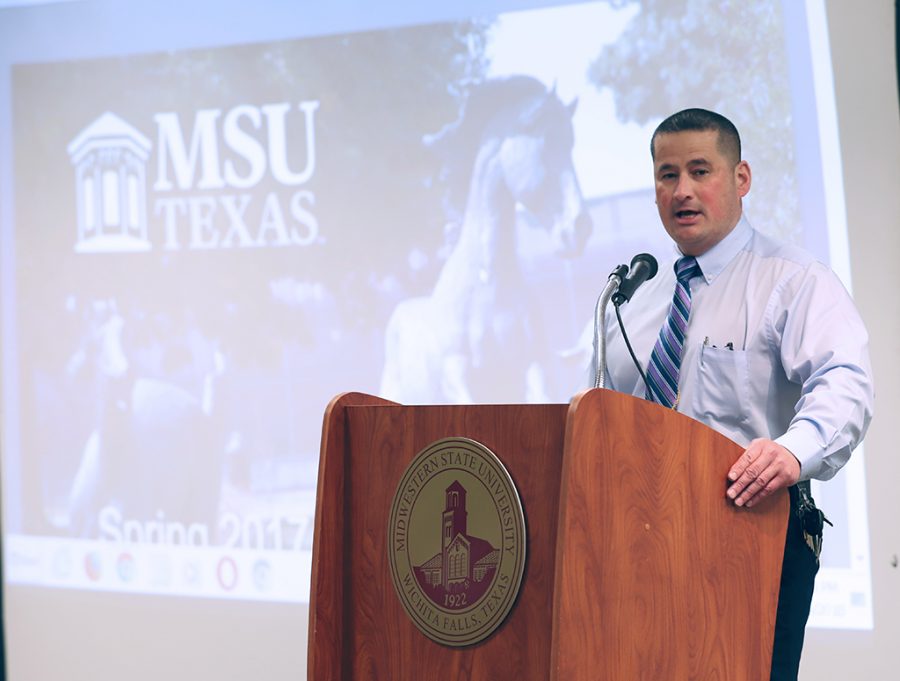 Patrick Coggins, chief of police, explains what the clery report is at the Open Forum about campus safety in CSC Comanche on March 19. File photo by Bridget Reilly

After last week’s edition of The Wichitan were stolen in bulk, the campus police were notified on April 25 of thefts in the Clark Student Center, Moffett, Dillard and Bolin, during which around 200 newspapers valued around $50 were taken.

In an email sent by Patrick Coggins, university police chief, it said, “On April 25, 2018, MSU PD was notified of a theft in which numerous copies of the recently-published The Wichitan newspaper had been taken from the Clark Student Center. Approximately 200 copies of the Wichitan were reported taken from four racks within the CSC, and the value of the missing property is estimated to be approximately $50. MSU PD Case Report #2018-000098 for Theft was filed by the responding officer. This case is currently under investigation.”

When those in charge of the investigation went to review footage from cameras, Keith Lamb, vice president of student affairs and enrollment management, and Dail Neely, director of student conduct, said they were unable to retrieve camera footage because the camera was moved.

In a subsequent interview with Neely on May 2, Neely said during the renovations made to Mesquite Dining Hall around fall of 2017, the camera around the area of the renovations was moved to view the three doors exiting the food court and the drink station.

“When they [constructed] Maverick’s Corner, those [cameras] were taken out because of the renovation,” Neely said.

Although Kyle Owen, associate vice president of facility services, said campus personnel and facility services reviewed the plans to ensure it was in accordance with building codes, Owen, on May 1, said he was unaware of the camera’s absence.

“This was the first I had heard of them being removed,” Owen said. “If I had realized they were being removed, I would have asked somebody, ‘Are you sure these need to come out?’ [Though] they might have made the call, that we don’t really need them [and that] there is not a security risk from them not being there. My bet is, it wasn’t until after all the work was done, that they realized they [the cameras] were not there anymore and by then the money was spent.”

Neely also described how the footage system in the CSC is outdated, and there are requests to update it along with adding new cameras.

“We have requested money through student allocations, so I don’t know if that has been approved yet,” Neely said. “We usually do not find out until the end of this month [May] whether our allocation was approved. The system is old, it’s extremely old, like it’s [from] 1999 – 2000, with updates in 2005. We put in a request to replace the entire system and add new cameras.”

To Lamb, a solution could be to standardize the feeds for the police to have access to all the feeds to be aware of their functionality.

“To have the police be able to see all of the camera feeds, we have to standardize the system, which will take significant resources,” Lamb said. “We should probably start doing it a little bit at a time, whatever we can afford each year until we get there. It will probably take a period of years without a significant capital investment.”

Because of the scattered nature of the system, Lamb said it is the responsibility of each college to keep records of the cameras.

“Right now, we don’t have a centralized office for our system. Each building is kind of responsible for their own. So after the years, you have a ‘hodge podge’ of camera systems on campus and nothing is standardized,” Lamb said. “Each building is responsible  for making sure they’re working and notifying individuals if they’re not working. It would make a lot for sense to have a place for a type of control over that and, frankly, a budget associated with that so that they can get it fixed.”

Those who find out whether a camera is not working is to make a report, in which Owen said would go through facility services and be replaced.

When someone notices a camera isn’t working, Owen said they are supposed to report it him so he and his department can fix it.

“If we know something is broken like that, we are going to fix it,” Owen said. “We are not going to leave it down intentionally,”

Kasey Brunskill, management information systems junior, said he felt the affects of not having working security cameras when he said his bike was stolen.

“When I was living at Sundance last school year, I was walking back from class, and I saw that there was a [broken] bike-lock on ground, and I was like, ‘That sucks, someone got their bike stolen.’ Then [I looked again] and was like, ‘RIP that was my bike-lock.'”

After he reported his stolen bike to the police, he was informed the investigation would take a while to solve because the camera outside the building did not work.

“I didn’t even know that. That’s why I left my bike out there [in the first place]. I was shocked to hear that the cameras weren’t working, because [we were paying so much] to stay there,” Brunskill said. “Good thing no one got assaulted because they have would have no proof of it. Thank God it was just a bike.”

According to Lamb, authorities are not aware of a camera not working until an incident has occurred.

“Oftentimes, the police and me by default are not made aware that something is not working in a particular building until an incident happens,” Lamb said.

Other stories pertaining to newspaper theft:

1,500 copies of student newspaper trashed by thieves at Texas university —The Wichitan

CORRECTION: Information from Dail Neely regarding the number and placement of the cameras was updated.