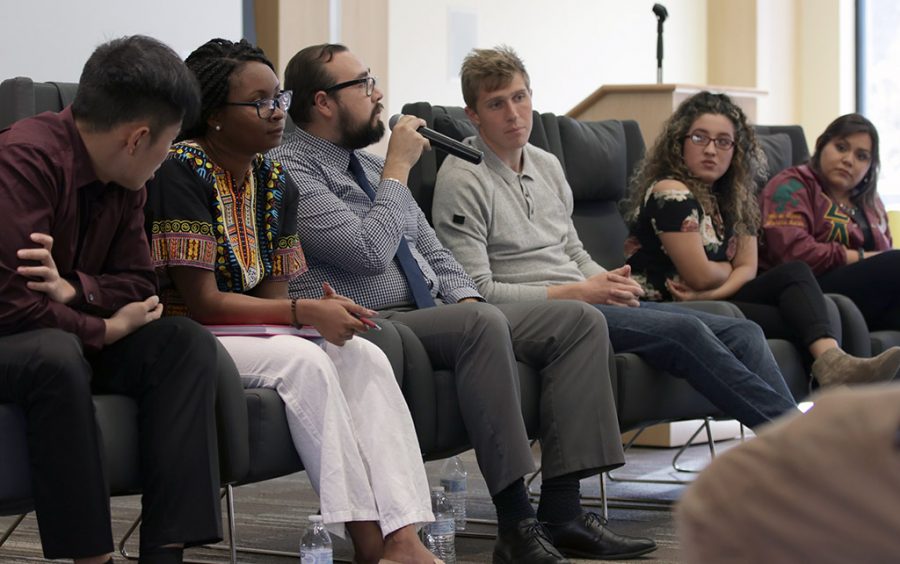 Aspirations, to live a better life or just to play soccer.  As a part of Inclusion Now week and to “make people aware of the culture that is on campus,” Bilingual Education Student Organization and Fain College of Fine Arts hosted “Immigration Stories” in Legacy Multipurpose Room. With a panel of five students and one alumni working as complex coordinator, they all had a chance to share their experiences coming to America and reasons to immigrate.

“When they [students] hear the word immigrant, they only think of certain type of people, such as Mexicans or people from south of the United States. So, this was a way of just letting them know there’s just not one type of people: There’s different [types],” Patricia Ramirez, bilingual education senior and BESO president said. “I tried to invite someone from France, someone from China, someone from different countries. So, this was so people can learn more about their peers.”

Montserrath Garay, bilingual education senior, immigrated with her family when she was about 6-years-old. Because her father “wanted the best” for her family and because of the job limitations back in her small, ranch hometown of Zacatecas, he traveled to America first.

“People who live there are mostly working in agriculture. So, if you don’t find jobs, you cannot provide for your family, you cannot give your family food or shelter,” Garay said. “They mostly live in like very, very small houses, where you only have one room, the bathroom is outside and another room you can use for living room and a kitchen.”

“With that, I was able to work, I knew I could go to school, and I was safe: not only for myself, but I can also protect my family,”Garay said.”  From that, I was so excited because I could actually have an education that I’ve always dreamed. Yeah, there’s limitations, I cannot do certain things, but that cannot stop me and hopefully, things get better for us because there has been a stop where can eliminate the DACA, but it’s the only thing that tells me or says what I represent. It doesn’t limit what I could do. I made it this far and I know that I can make it even farther.”

Brenda Adame, bilingual education junior, came from a similar area in Mexico called Durango at 12-years-old going into seventh grade. Because her older siblings were already in America and her father stopped teaching, Adame’s family decided to immigrate.

“We usually just use to come here to visit them like over the summer or Christmas break that all we did up to my sixth grade year,” Adame said.

However,  Adame, was not eligible for DACA because of her short time in the United States.

“I found out that I couldn’t apply because I hadn’t been here for less than 5 years by the time and then my senior year, I tried applying again, but I was denied because of the same thing,” she said.

Unlike Adame and Garay, complex coordinator and former student Claudio Rodriguez, came to the U.S. as an adult to earn a Bachelor’s degree after realizing that he wanted a better quality of life after “working random jobs” after dropping out of college in Mexico.

“While I was college, I was lucky enough to start working for the housing department,” Rodriguez said. “I actually was an RA at Midwestern and, after that, I graduated and once you graduated, you have a student visa you have to apply for a work permit like every year that’s called the OPT (optional practical training for F1 students), and I did that and went to work for the banking industry and I really hated it so, that’s when I decided I had to come back and decided to come to study for a Master’s in business administration.”

Pierre Bocquet, global studies junior, had a different experience. Bocquet grew up in France and came to the United States about four years ago and enrolled in ESL courses at a community college in Dallas then transferred to MSU to play soccer.

“I had a good experience like going here,” Bocquet said. “I met a lot of different people, because  you don’t get to see that in France, like it’s very different here like, you meet people from around the world so, that’s very interesting.”

Coming from a “humble, god fearing family” with “successful and ambitious sisters” in Grenada, Kornika Degannes, finance senior, said she MSU was “a buzz” in her home country. While she has enjoyed her time on campus, there has been challenges.

“One of my biggest was transitioning from a long answer essay based institution to a multiple choice based college,” Degannes said.

Jiankun Kang, athletic training senior, who came to America five years ago from China, also faced challenges because of the language barrier. Kang said he was only taught English grammar, not how to “start normal conversation with people,” in China; however, he had friends help him.

“My best friend [in America], the first time I met him, took out his phone and tried to talk with me with the Google translator, that’s how bad my English was,” Kang said.