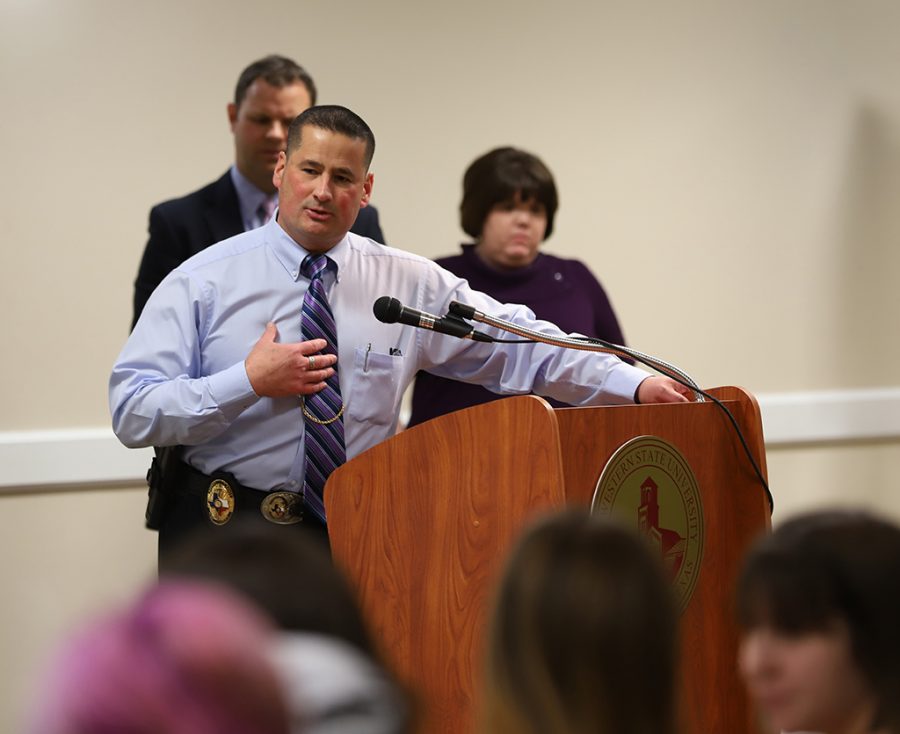 Patrick Coggins, chief of police, answers questions from students at the Open Forum about campus safety in CSC Comanche on March 19. Photo by Bridget Reilly

An anonymous donor established a fund of $25,000 for Midwestern to research responses to sexual misconduct on college campuses, with MSU as a case study.

In a postmaster sent out by Suzanne Shipley, university president, on March 28, stated, “The donor, who has had a lifelong interest in enhancing the safety of students on college campuses, said that an enormous opportunity exists at this point in time to make important strides in this area. It is hoped that by studying processes in place at MSU Texas and their impact on student safety, significant improvement might be facilitated.”

According to Shipley, the donor said they want to remain anonymous, so Shipley said she and the university administration members will respect their decision while using the funds to move forward with sexual misconduct research.

While the funds were donated this semester, the money will not be used until the 2018—2019 academic school year semester with the “expectation that research results are disseminated nationally,” Shipley said. Because of the campus climate surrounding sexual misconduct and administration’s response at the forum, Shipley said the donor felt the money was needed to fund research on this topic.

“It is a one time gift of $25,000 which means it is all available next year,” Shipley stated. “It is to fund research that is very immediate to our situation. It is my intention that the summer months be used to collect research and reports to support the work of the panel when it reconvenes in the fall semester.”

To begin working on resolutions before the Spring 2018 semester ends, Shipley stated they will begin reviewing existing information through Title IX and Clery records.

“I appreciate the supportive role that our governance bodies are filling in effecting a rapid response,” Shipley said.

The funds will be allocated on research projects in the fields of behavioral and social sciences, criminal justice, mass communication, higher education practice and policy and student affairs. Students and faculty are able to apply for grants from the fund, and the postmaster said applications are welcomed through the Office of Sponsored Programs and Research.

While accountability is important for students to connect with administration, faculty and staff, Peña said change comes out of discussion amongst students instead of pointing fingers and blaming each other. Actions speak louder than words, Peña said.

“I don’t think it’s something to pinpoint towards administration, faculty and staff members,” Peña said. “That’s something we, as students, have to hold each other accountable to. We can’t expect change to happen on campus if the perception of how things seem isn’t clear.”

Although the goal is for a campus to have zero sexual assaults on campus, Midwestern ranks average on campus sexual misconduct comparatively, Peña said things seem heated because of the attention being brought on,

The grants awarded to faculty for sexual misconduct research will be $5,000 and those to students will be $2,500, and Peña said the efforts to fix the behavior on campus is a collaborative effort, but it centers around students interactions.

“We do have excellent policies, but I think one problem we do have is the communication because it’s great to have this stuff listed on a website, but people say it’s not enough. We have to figure out what is enough and what we have to do to let people, students know,” Peña said. “These are things Dr. [Keith] Lamb is trying to do, and I am very hopeful the climate on campus will be assistant by all the initiatives on campus.”

To help unite efforts to analyze and work through the tense climate, Shipley stated the administration members are working diligently to provide efficient and clear direction to provide sufficient help for students and faculty.

“I would like to remind the campus community that, although we seek as rapid a resolution to Title IX cases as possible, our processes must also be thorough, accurate and fair,” Shipley stated in the postmaster. “Thank you all for supporting an effective response to sexual misconduct.”

Those wanting to conduct research on these topics can contact Brittany Norman, research administrator, with the Office of Sponsored Research by calling  (940) 397-4714 or contacting the office through email at [email protected]